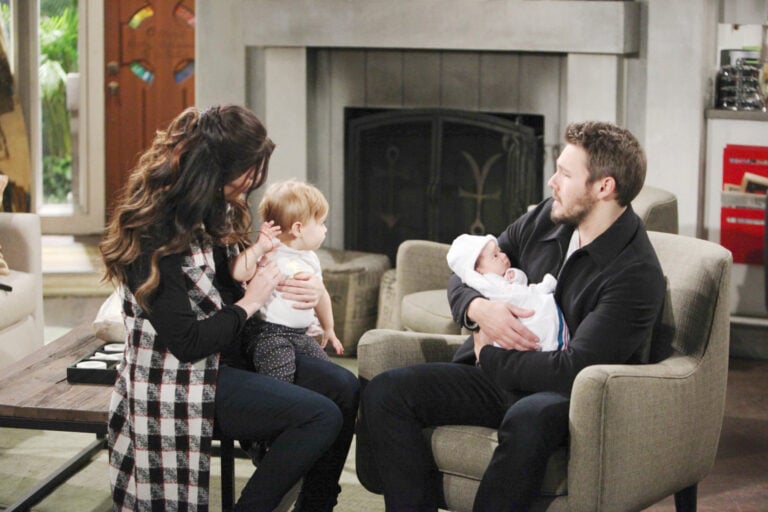 The week of February 15 -19 on Bold and the Beautiful was focused around what we’d all been waiting to hear. Those paternity test results. Viewers had mixed emotions on Liam being the father of Steffy’s baby, and because she said she knew it in her gut that Finn was the father, we all thought to ourselves, “That’s soap opera code for paternity test switcheroo.” (Vote your thoughts below.) With Vinny’s sudden involvement in the story and Thomas wanting Hope in his line of sight, it does seem to be the obvious conclusion. With that in mind, here’s what’s coming next week!

Hope admits to Liam that the paternity test results are making her questioning everything.
Finn makes his intentions clear to Steffy of what he wants.

Steffy gives Finn and Hope an impassioned speech about her feelings for Liam.
Bill and Liam commiserate with one another over the issues with their relationships with Katie and Hope.
Ridge gives his son some sound advice. He tells Thomas not to listen to Vinny’s advice about going after Hope.

Finn has had it and gives Liam a new set of boundaries for being around Steffy.
Thomas becomes concerned for Steffy and Hope over their current situation.

Steffy has an apology for Hope, knowing how heartsick she’s been about the baby being Liam’s instead of Finn’s.
Thomas decides to give Steffy and Hope help, though it’s in a highly irregular way.

Wyatt asks Katie for a favor on Flo’s behalf but it doesn’t look as though Flo knows about the favor…
It looks like it’s Finn vs. Liam. Steffy must intervene when the men compete for her.