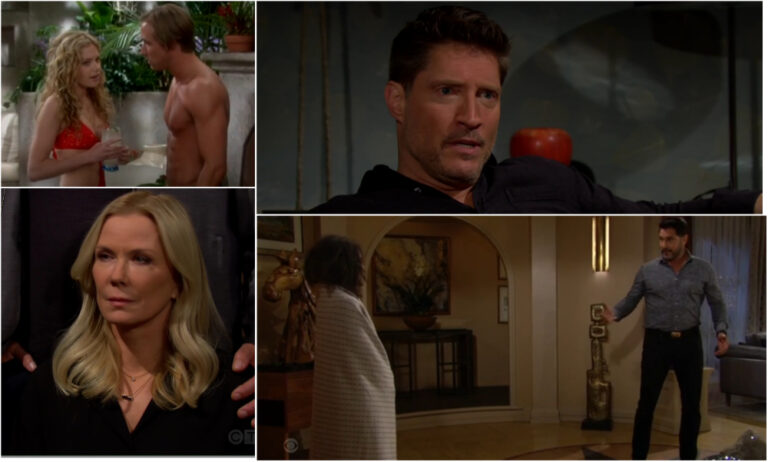 Can I be honest with you? Right now, I’m not a happy Bold & the Beautiful fan. If I weren’t writing this column, I would probably stop watching.

Chrissi is having similar issues watching Y&R right now and wrote about similar issues on the show. Y&R opinion: Watered down characters, the promise of drama that’s never delivered, which makes investing difficult.

This is purely my own opinion but I can tell from your tweets that a lot of you think the same.

There are two problems with the show. One is that Bold and Beautiful is no longer written for daily viewers. The endless, repetitive recap scenes seem to be meant for occasional and new viewers, to catch them up on who’s doing what.

These scenes come at the expense of telling actual story with their capable cast, many of whom haven’t been on screen in months.

The second problem is that they’re no long writing build-up to the stories. A big moment (Sheila’s escape, Bill finding Li) just goes PLOP! into an episode with very little if any lead up.

It’s like the writers think we don’t watch the show every day. Characters are spending more time talking about story than actually playing out a story. This needs to be fixed.

B&B is in desperate need of a viable teen scene. Soap opera summers were once all about sun, skin, sex and romance.

The hottest young performers and the most scintillating stories took over all the shows for weeks in an effort to hook teens home from school and adults enjoying their air conditioned living room.

B&B, which has no teenage or college age characters on-screen, has spent a big chunk of summer on episodes consisting almost entirely of characters talking about scenes we already saw.

Indoors, with all of their clothes on.

If there was ever a time to not watch, it was this past month.

What should happen: Have RJ mixed up with some other spoiled Beverly Hills kids and get into trouble. Crash an expensive car. Get arrested.

Make his parents miserable. RJ should already have a romantic rivalry with his half-brother Jack Marone.

Ridge is shouting at people again, so it’s a day ending in Y. This week, the blowhard was demanding that Baker catch Sheila and that Deacon be banned from everyone else’s life.

Ridge’s fragile male ego was on full display. Ridge the love scoundrel who could get away with almost anything by flashing his smile and his bare chest, has become the grumpy neighbor that yells at kids to stay off his lawn.

Brooke and Ridge told Baker that they had urgent info about Mike Guthrie that might help catch Sheila, but they had to tell him in person.

Ever hear of texting? E-mail? A phone conversation?

When the trio finally got together, Brooke was the smartest person in a room of knuckleheads — and I’m cool with that because I still remember that Brooke is a chemist.

She remembered who Mike Guthrie was and all but walked Ridge and Baker through her conclusion that Mike was helping Sheila.

Crazy idea, but once Brooke figured out that Mike was in on it, couldn’t they have had a police officer follow him around?

That would have lead straight to Sheila and Finn and the end of this story.

Baker, who has a strange sense of self-confidence given his track record, decides that the wise idea is to let Brooke and Ridge help out when he questions Mike. SAY WHAT?

The California prison system and the Los Angeles Police Department are looking really dumb on this show.

No way a cop (who isn’t compromised) would be sharing evidence about an investigation with the victim’s family.

Circumventing real life and logic is part and parcel of soap opera storytelling, but B&B continues to take it to new levels. Is this story really worth it?

I am confusion! Why is Ridge interrogating Mike??? He ain’t nobody’s detective. With Brooke there?? This is just damn silly. This story is dragging and it’s just stupid now. #BoldandBeautiful pic.twitter.com/vTevX7S9As

Who is this woman calling herself Brooke Logan? I’m all for character development but she’s become way too understanding and compassionate about other people.

Brooke has always been insecure about her love rivals, so Ridge’s continual blathering about Taylor should be sending Brooke over the edge.

After so many years on the love merry-go-round with Ridge and Taylor, Brooke should recognize what’s happening.

She should be coming up with a plan to convince/trap Ridge into staying with her.

I think all the men on the show need therapy to get over their infatuation with Brooke. #BoldandtheBeautiful

Enter our next recapper, Hope Logan Spencer, who has apparently become the definitive expert on all things Sheila Carter.

I could dig Hope as an investigator because being nosy is in the Logan DNA and because Sheila is as much a part of the extended Forrester family’s history as anyone.

But then Hope blows the illusion by saying she doesn’t understand how Sheila could “just disappear,” as though this hasn’t happened before.

So not much of an expert after all.

What should happen next? Brooke drops the understanding act and gets back to being selfish, scheming and manipulative, the way we like her or like to hate her.

Once again, new friends Deacon and Taylor were the highlight of the week.

Deacon fudged an appointment with the world-renowned psychiatrist to just hang out with Taylor. Creepy, but consistent with the show’s attitudes towards women.

Deacon, to Taylor: “I would challenge you to talk about your feelings about Brooke and Ridge’s destiny.”

Taylor, about Brooke and Ridge: “Maybe, just maybe, this bridge they’re building is burning to the ground, day by day.”

I still really like Deacon and Taylor together as friends but it might not be a good idea to take emotional advice from an ex-con.

The more I see scenes of Taylor & Deacon the more I’m loving them together. I love the easy banter & honesty they have w/each other. Plus if they get together romantically Brooke would be seething w/ jealousy & Ridge’s head would explode. 🤯 #BoldandBeautiful #BoldandtheBeautiful

Too early to tell if these Deacon and Taylor scenes are going to go somewhere story-wise or if they’re just enjoyable filler. The actors have great chemistry and it would be foolish not to exploit that.

Maybe Deacon will encourage Taylor to completely unleash on Ridge for toying with her feelings. She could yell, scream, throw some things! Say things that can’t be taken back.

What should happen next? Taylor and Deacon to do some amateur investigating and find Sheila and Finn.

They couldn’t do worse than Detective Baker, and could provide Deacon with thoughts for his own future as PI, which has all sorts of possibilities and mixes him in with all the characters.

No suspense in Sheila’s scenes

There’s currently no suspense in their scenes. Maybe the writers lost interest. It started off so good and then just flatlined like Finn. I cannot wait for this threadbare Sheila story to end.

What I do like is that Finn saw right through Sheila’s lies, but his hostage negotiation technique needs some work. Might Finn eventually see that he’s more like his bio mom than he cares to admit? DRAMA!

What should happen next? Sheila used Mike’s phone to call Li. If this were another show, this would somehow figure into the unraveling of the plot and catching Sheila.

Like you, I’ve watched years of soaps, and they’ve made me very suspicious of faraway clinics and doctors with European accents.

So when Dr. Flavia called Taylor to tell her that Steffy checked herself into a clinic that’s more like “a resort,” alarms went off in my head.

Is she really at a legit clinic or is Steffy being held against her will by an unknown villain? I’d prefer the second option. DRAMA!

Timing is everything when it comes to building story. Everything about Steffy, including Sheila’s escape and the reveal that Finn was alive, should have been put on the backburner until Steffy was back on-screen.

I want to actually see Steffy deal with her grief and her mental health, not listen to other characters talk about it.

I want to actually see Steffy longing for her “dead” husband at the same time that Finn is trying to escape Sheila’s clutches. Their reunion needs that dramatic heft to be as epic as it should be.

Alternative storytelling: How great (and awkward for Taylor) would it have been if the doctor calling from the grief resort was Dr. James Warwick?

James also happens to be the father of Sheila’s estranged daughter Mary, aka Erica Lovejoy. Erica has caused all sorts of problems in the past and could be a worthy rival to anyone on the show.

B&B has a wealth of past characters like James and Erica that could come back for short arcs and enrich story.

Even though it was an open secret on social media, I nevertheless enjoyed Li’s return from the dead because the actress is so, so good. But I’m having trouble believing that Bill of all people would stop to help an unhoused person on the street.

Though, honestly, they should’ve had Bill recognize Li. Because the very sad depressing truth is, no one in LA (especially a Bill Spencer) would likely even bat an eye walking past someone they didn’t know laying on the street.

There should have been a bit of set-up in the previous scenes with Bill and Wyatt to make this scene work.

Just a couple of lines with Wyatt encouraging Bill to be kind to people and Bill saying he never got to meet the Finnegans because he’s been keeping a distance from Steffy as she starts her family.

So then when Bill found Li in the alley, we know that he’s trying to be a good person and that he doesn’t know Li. Easy peasy.

Alternative storytelling: Bill does a My Fair Lady meets Nell magical soap opera love treatment on Li, who is amnesic. This brings back her memory and ability to speak in time to bring down Sheila.

Bill Spencer being reduced to a gossip is a crime. He should be dating models but not feeling anything like he felt for (Brooke? Katie?).

Hopefully his discovery of Li will give him something more to do than trash talk Ridge.

$Bill is everything today. I’m just going to say it. I’m open to Bill and Li. After two seconds of watching him with her. Am I silly in my thinking? Anyone else enjoying this scene? #Boldandbeautiful pic.twitter.com/YeB7fOnOH6

Lastly, and I know I’m repeating myself, the lack of queer representation on a soap opera about fashion in Los Angeles in 2022 is STILL inexcusable.

There’s no way I believe that Steffy doesn’t have gay friends or that Bridget doesn’t know any lesbians or that Bill hasn’t met a few trans women.

Just about everyone knows an LGBTQ+ person, even if you don’t realize it.

Queer people are integral to the fabric of our society and to the fandom of soap operas. We deserve to be represented on the shows we watch.

What do you think? What’s on your B&B wish list? What will happen in Monaco? Where has Li been this whole time? Leave a comment and feel free to read more of my opinions on B&B on SoapsSpoilers, which includes some fun alternative storytelling ideas!