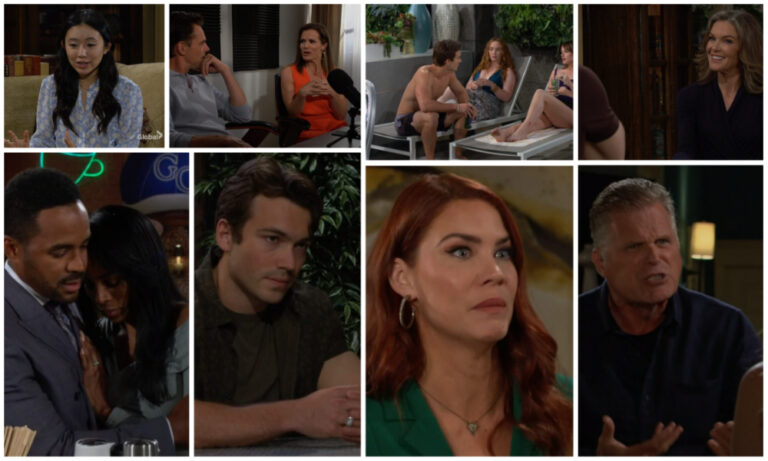 It’s a soap about nothing.

Seinfeld was described as ‘a TV show about nothing’, but it was brilliantly written, relatable, the plots were funny and the talent was out of this world. Y&R has become a soap about nothing, with watered down characters who were once compelling, a clear lack of plotting, and the promise of drama to come that never delivers.

I don’t write this with anger or to point fingers but to plead with the show for changes that bring this soap back to its former glory.

Before I start bellyaching, I want to say how pleased I am at the return of GCAC, which is a beautiful set. I’ve been more of a sporadic viewer in recent years so I read recaps but didn’t always see each set.

Dive Bar is pretty spectacular. Seeing Victoria’s house was fabulous. Having characters in their homes or outside frolicking, can be comforting. Now if only we can get them into the pool…

Jack gave Allie a job at Jabot at a junior level, which is probably higher than where she should be at. But it’s fine.

She’s intelligent and has had some education and something tells me she’s a go getter.

We all knew (including my Diane), that Kyle would give his mama a job at Marchetti.

This is a woman who faked her own death his entire life and he’s rewarding her by paying for her to stay in a luxury hotel and handing out a job in PR, when she’s never worked in PR.

It makes me a little giddy, I admit, since Diane’s the most hated woman in Genoa City, yet she’ll work PR. It doesn’t matter since we’ll only ever see her shuffle papers.

Why doesn’t Diane either rent out or sell her home in Los Angeles for money and make her own way?

For a woman who spend the last several years leaning on herself, she certainly has no issues depending on her son for handouts.

First the hotel room and now this! And yet, my Phyllis, Ashley and Nikki are the only one who think Diane has an agenda.

It’s painful how dumb everyone in Genoa City becomes to fit the storyline.

What do you guys think? They rest have all got the dumb, right?

I don’t even want to talk about Noah, our resident sad sack, because though he’s been smiling more, thanks to a (finally) animated Allie, he’s still depressing AF to watch.

They’re bland together, and he’s “following his bliss” or whatever, which means he wants to own a bar. Well, great, as long as he’s finally not so depressing.

At least he isn’t going to repeat the words CEO, COO and c-CEO ever.

But something tells me this guy will never be happy. I’d rather see Crystal return and turn Noah’s head, which would add some much needed drama to these two.

Chelsea’s been spinning out since Rey’s death. Adam recently pointed out that there are signs of another breakdown coming, which was an anvil to the head, telling us where this is headed.

Twice now, Kyle has come to Chelsea’s rescue so to speak, during her meltdowns in the park. We all assumed that meant she’d be after him since he checks off two of the boxes that draws Chelsea to men.

1) In a committed relationship

Now that Rey’s gone and Kyle may not be her next ‘target’, it’s possible she’ll set her sights on Billy again, since they seem to be hitting it off creating their new podcast.

Unless of course, she wants Adam back.

What I liked and what I didn’t like: I enjoyed Chloe and Chelsea’s argument over Chelsea sketching for winter instead of their summer line. I love that Gloria returned and that she intervened with her Gloria self, which was a lovely surprise.

She was able to turn their argument around, but this scene would have had bigger stakes if they had been arguing like this for at least a few days or even weeks.

And now that the scene is over, Gloria’s gone, a move I disagree with. Gloria provides humor, something the dour show doesn’t provide.

I can’t believe I’m saying this but I’m disappointed in how this story is going. I loved Imani when she first arrived in GC.

I thought she’d stir the pot, and be sexy and manipulative and then we’d see a softer side of her, when we learned her mama, Naya, had a stroke. But this? This isn’t it.

She’s coming off more as though she’s using her mother’s declining health to get Nate into bed and we’re seeing no genuine emotion to make her rootable, even to get into Nate’s pants.

As someone who loves Phyllis, even when she’s doing insane things I disagree with, I am having trouble with the way Imani’s being written.

Maybe she’s only there to prop the ever bland Nate and Elena, but you can’t create chemistry where there is none by throwing a monkey wrench into the relationship.

I want more for Elena than this, and I wanted Imani more of a vamp. I don’t really care what Nate does at this point.

While I didn’t think Victoria should be with Ashland, and I detailed why in one of my last opinion columns, that was her decision. Not half of Genoa City’s. The only problem that her family should want to deal with is how it affects their company, you know, since she’s a mature adult of 50?

I am one of a few who like cold Victoria!

I find her amusing, just like her daddy. If she were a sweetheart, she’d be a dead bore and we’d have nothing to bitch about when she did something wrong!

#YR Victoria is 50 not 18. I’m annoyed with her family members acting like they need to control who she loves. They don’t give Nick this much shit for his shitty love life

Since the break up, Victoria went back to Locke, moved to NYC with him, and swindled him out of the 500 million he received from her daddy to get him out of her life, humiliated him and then she hijacked the Newman jet from Adam to go home to Genoa City, only to ignore Adam and Billy’s warnings that her ex-husband wasn’t done with her yet.

Adam literally told Vicky that Locke had nothing left to lose.

She really knows how to pick them. And how to make mistake after mistake, yet Victor rewards her by giving her back the CEO position that he temporarily gave to Adam to lure her back with. Oy.

At any rate, she let a man who has nothing left to lose, into her house “to talk.” And this is a woman who is running Newman Enterprises. Yikes.

The fallout? Adam was hurt, he became a little angry, and left the company. Then he dumped his girlfriend so that she could keep her job as CEO at Newman Media, in a move that showcased his sexism.

Some of you are confused, right?

Before I explain, let me say that I like Adam and Sally as a couple — a lot. I think they’re perfect for each other, sexy together and exceedingly rootable. I felt so bad for Sally when Adam dumped her, even though we all knew he was miserable doing it.

Taking away a woman’s choice, her decision making, is sexism. It’s not romantic to devastate a woman. Adam could have easily gotten the same result if he schemed with Sally to break up with her.

In public. They could have snuck around, fooled around and fell even more in love if he had brought her into his decision-making.

She gets back on her feet without a man plotting her path. Soon, she’ll be as watered down as the rest of the characters.

That’s all that’s happening. Don’t get me wrong, I love the drama between Ally, and I enjoy ripping a couple apart only to watch them make their way back to one another but not so much like this.

Everyone said Adam would go off the rails and yet, all he’s done is dump his girlfriend and warn his undeserving family that Ashland was coming after Victoria.

If anything, Adam, not Nick, should have been keeping an eye on Victoria. He, not Nick or Billy should be the one to find Ashland at her place, poised to off her.

If I was writing, she would have taken care of Locke herself, but that said, how delicious would it have been if Adam was Victoria’s saviour so he could rub her face in it?

My guess — pure speculation — is that Ashland will be killed off. But I mean, weren’t we all guessing this when the guy came on the show? I’m not sure I want that to happen.

I can’t help but think that instead of Diane turning Ashland in for violating his restraining order (not that it was entirely his fault!), that they could have kidnapped the kid.

I think these two could have made a great evil couple. Game, meet game!!

But we can’t have nice things.

Would you let this man creeping around your garden into your house?!