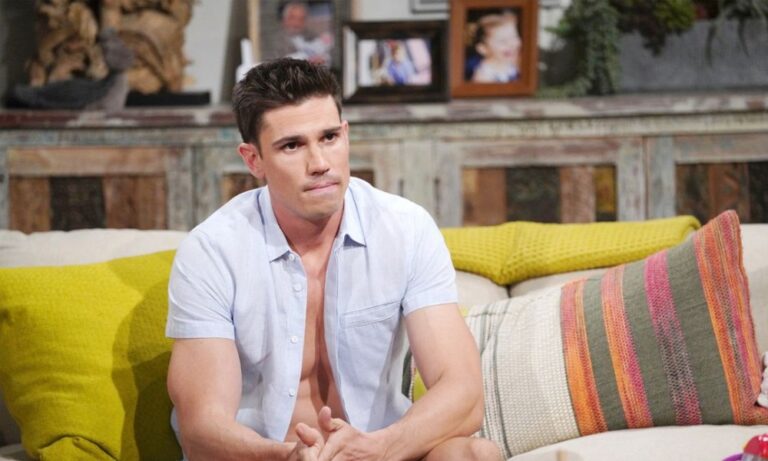 It’s the end of Finn.

On the April 1 episode of Bold and Beautiful, viewers were treated to quite a terrifying surprise and no, it was not an April Fool’s prank. In fact, as time went on, and the paramedics were finally on the scene, pulling up that white sheet over his head, we realized this indeed was the last we’d see of Tanner Novlan on B&B. The last we’d see of Finn.

It looks like super doctor John “Finn” Finnegan hit a medical emergency even he wasn’t able to fix.

Realizing his wife Steffy was in mortal danger and his unstable mother was on the loose, he rushed to help her only to wind up stopping a bullet amid the garbage bags of Il Giardino.

An enraged Sheila was preparing to shoot Steffy to keep her silent about how she knocked Brooke off the wagon, but, with surgical precision, Finn arrived just in time to catch the bullet meant for his wife.

As Finn apparently died, Sheila was preparing to finish Steffy off next.

Native Saskatchewan actor and model Tanner Novlan joined the cast of Bold and Beautiful back in 2020.

His character quickly wound up in whirlwind a romance with Steffy the potent fashion designer and Forrester Creations heiress when she was his patient.

Since then, the couple have faced their share of problems, but probably none of them have been as big as his own birth mother, Sheila. The couple have one child, Hayes.

Before joining the cast of B&B, Novlan had roles on Roswell, New Mexico, Modern Family, and Mohawk Girls. He recently shot a pilot for the series Puckheads.

So far, the actor has made an official statement in Soap Opera Digest about his status with the soap. He’s officially out. He told SOD that he appreciated how embraced he was by the soap community in the short time he appeared as Finn. He called it an honor to be so well received by fans and critics.

He also mentioned how surprised everyone was by the twist of his death. Especially Jacqueline MacInnes Wood (Steffy). “She was super surprised because we have so many great Sinn fans. She was speechless and I said, ‘Well, I think that’s the point of it. But everyone was very supportive. They are a great family and we’ll remain friends.”

What’s in store for Steffy now that they killed off her husband? Brad Bell admitted that though Liam and $Bill will be at her side while she recuperates, she’ll get through this in time and eventually, a romance will be in her future. Something quite unexpected.

Update May 24: While Brad Bell said that “eventually, a romance will be in her future,” for Steffy and he called it “something quite unexpected,” it wasn’t exactly what viewers were thinking. In Monday May 23rd episode of B&B, it was revealed that Finn was alive and Li’s been keeping him from his loved ones. This was something that many viewers suspected for a while. Tanner Novlan went on The Talk and discussed his character’s return from the dead, something that has made Finn fans and SINN fans everywhere, thrilled.

“Here’s the thing,” he admitted. “I kinda knew. Don’t be mad at me, but I was blown away at the fan’s reaction! I couldn’t believe the support. But I’m contractually obligated not to tell you guys, and I felt awful about it!”

With his character now back from the dead, @tannernovlan spills how hard it was to keep his return to @BandB_CBS a secret ⤵️ pic.twitter.com/HQnK1p2UNe