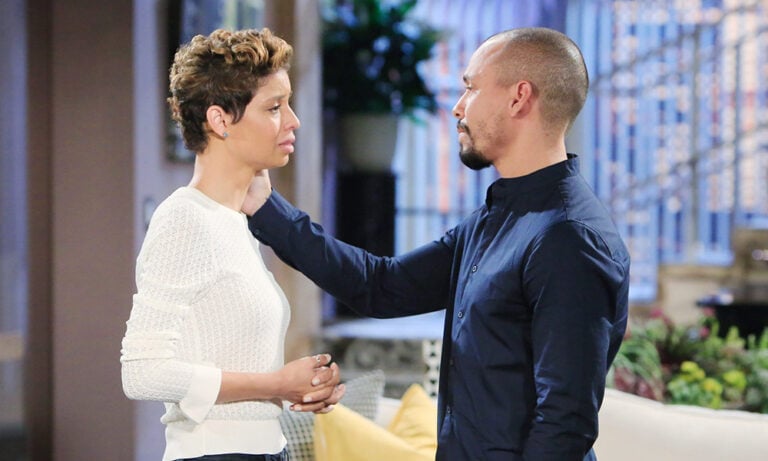 Soaps Spoilers is taking a peek at the Young and Restless spoilers for the week of February 22 to 26. But first, we figure some might need a refresher on what went down during the previous week. While Sharon and Rey discussed her feelings for Adam, the cop admitted that he’s unable to separate his distrust of the Newman and questioned why she couldn’t stay away from him. When Sharon and Adam were alone, they shared a kiss. Later, she didn’t reveal the kiss to Rey, but told Adam to stay away from her. Meanwhile, Nate accused Elena of having sex with his cousin Devon and…she admitted it. Nate wasn’t sure what to think of that. And Devon and Amanda discussed their chemistry and Amanda couldn’t help but feel he’s not over Elena. As Faith complained about being bullied at school and online, while Sally and Summer discussed a possibility that they could become friends.

Sharon makes a shocking discovery.
Kyle is troubled by a secret.
Devon’s loyalty is tested.

Victor does damage control and plots his next move.
Sally digs into Jack’s past.
Summer receives an eerie warning.

Victor does damage control.
Rey demands the truth from Sharon.
Chelsea’s world is turned upside down.

Nick takes matters into hands; Amanda has a chilly meeting with Naya.
Abby is faced with a tough decision.

Elizabeth Leiner comes to Young and the Restless as Tara Ashland appears in Genoa City. What will this mean for Kyle and Summer?