SoapsSpoilers’ General Hospital recap for the Thursday, December 30, 2021 episode. Today, Carly interrogates her family about what they knew, Sonny opens up to Dante, Portia and Curtis decide to get closer, and Drew rings in the New Year with Sam and Scout. We also have Wednesday’s GH recap where Carly told Sonny not to come home, Michael punched Scott, and Nina’s case was dismissed.

Valentin joins Anna at Kelly’s. She assumes he wants to talk about his father, but he doesn’t care about that. He wants them to kick this year to the curb and start the new one together. 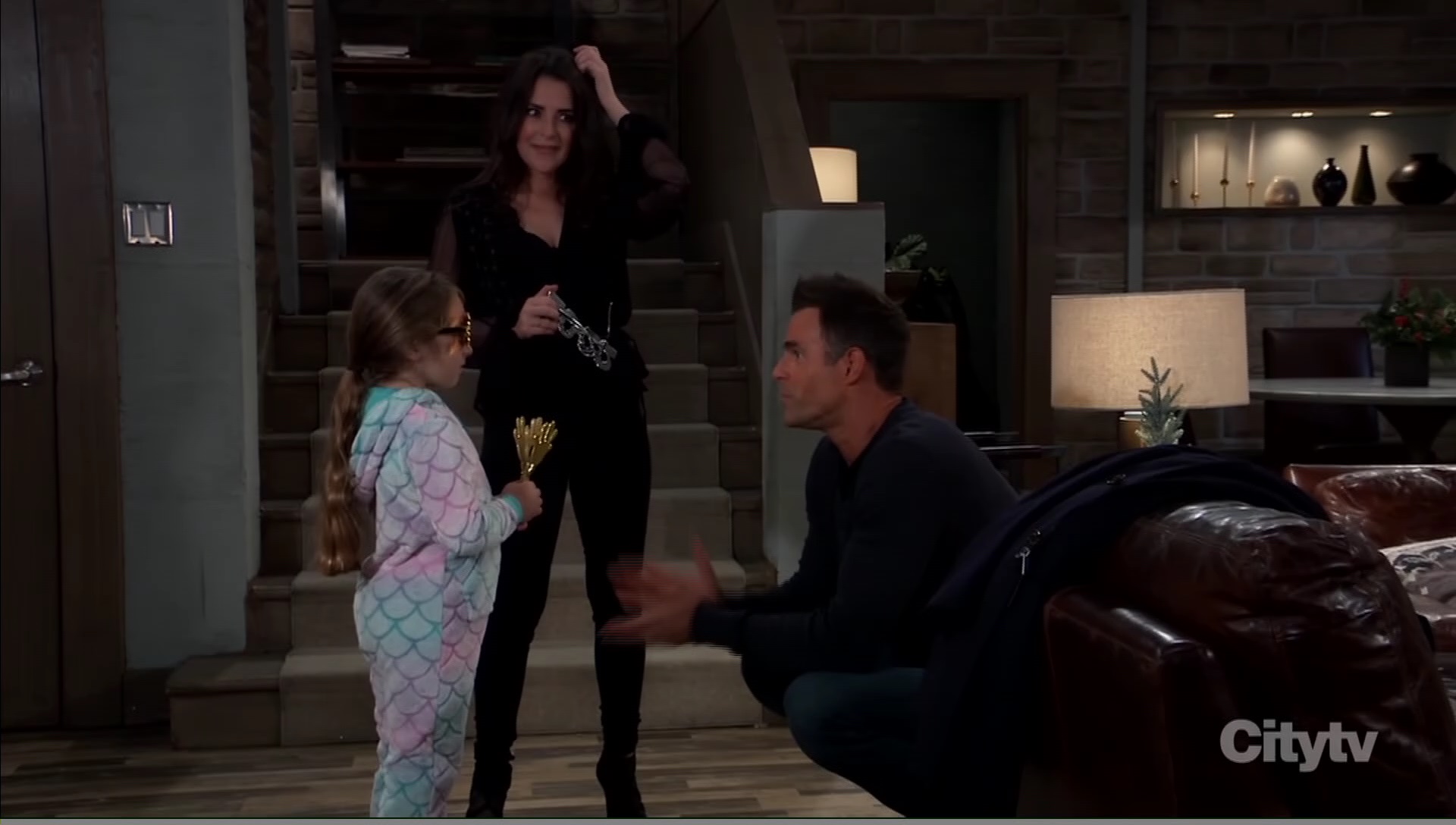 Drew stops by Sam’s penthouse with a gift for their daughter. They call Scout down and he pulls out some New Year’s glasses for her and Sam. His daughter asks him to stay until midnight. As a compromise, he gives her an airplane ride to bed.

As Portia strolls into The Savoy, Curtis tells her she’s looking stunning. He says this is a big occasion, not just because it’s the New Year, but because it’s the start of a new beginning for them. They kiss. She congratulates him on being a success. He wants them to get closer. “I do too,” she says, kissing him. “I’m falling for you,” he tells her.

Martin and Lucy arrive. He checks at the door about whether Valentin has a reservation there. He explains to Lucy that the Cassadine is not happy about their relationship and even gave him an ultimatum. If they don’t make a scene, they can have their cake and eat it too.

At their table, Maxie tells Nina that she should be more relieved that the case against her was dropped. Obrecht joins them, surprised to see them so down. Nina has realized that she’s the one who convinced Scott to question Willow. She accuses her aunt of destroying her life, but Liesl insists she’s saved it.

On the Corinthos patio, Joss calls Cameron to say that something major happened with her mom and she can’t get away to see him.

Inside the house, Michael informs Willow that Dante has found Sonny and it’s for the best that he’s kept away from the house for a while. She apologizes again for what happened in the courtroom. He assures her it’s not her fault and Sonny should have told the truth anyway.

When they head into the living room, she apologizes to Carly, who demands to know why she never told her about Sonny being in love with someone else. Willow reminds her that she’s the one he loves, not Nina. She didn’t want to hurt their marriage. Carly asks if she kept silent at Nina’s request. Willow confirms it. Carly asks Michael if he’s okay with his girlfriend siding with Nina over him and the family.

Carly explains she asked Sonny about his feelings for Nina and he admitted part of him is still with the other woman. “I don’t know what the hell to believe!” she declares, storming out. On the patio, Carly weeps as she looks up at the sky and wishes Jason was there.

Joss and Michael can’t believe that Sonny did this to their mom. Carly returns and apologizes, even taking Willow’s hand. She needs to get out of the house to think and leaves. Joss goes out too. Michael tells Willow he’s not really in the mood to celebrate the holiday but gives her a hug.

Dante finds Sonny drinking alone in Charlie’s. He tells her about getting kicked out and worries that he may have lost Carly forever. Dante reminds him of how many times they have split up. He’s sure Carly will realize there is nothing left between him and Nina. The cop reminds his father that Nina is the guilty party. Sonny explains that’s not the problem. He should have told Carly everything before it came out in court.

Sonny was going to tell Carly privately but then Jason died and Sasha and Brando’s baby died. He waited too long. Nina was hurt and lashed out, but it wasn’t criminal. It isn’t pity he feels for her, it’s something else. Dante asks what that something is. His father explains he didn’t leave all of “Mike” in Nixon Falls. He still carries part of his heart and it belongs to Nina.

Dante doesn’t entirely understand what happened, but he understands that his father’s experiences, even as someone else, remain with him. Sonny thinks Nina is like an ex and will just fade away. He doesn’t think his son should be there when he could be ringing in the new year with Sam. The cop offers to take him wherever he’s staying but Sonny insists he’s fine. They hug and Dante assures him all he said stays between them.

Scott drops by Liz’s place with a gift for the kids. It’s recordings of Franco’s music. He thought they could play it to keep him alive at New Year’s. Finn and Liz look at each other awkwardly. Scott apologizes to them. As he heads for the door, he tells the doctor to treat his family right.

In the kitchen, Liz tells Finn that she’s happy he’s there to help her ring in the new year. As they do the dishes, she takes off her wedding ring. The kids talk about the delicious cake and then Liz chases them out to get ready for the fireworks. She apologizes to Finn about how strong Franco’s presence is. Finn can see he obviously did a lot of good for her and the family.

Liz notices her ring is gone and assumes it fell down the drain. He fiddles with the pipes and finds it for her. When he hands it to her, she doesn’t put it back on. Instead, she puts it in a drawer and puts her arms around Finn.

Joss joins Cam and his brothers as the fireworks go off. They kiss.

Scott joins Maxie, Obrecht, and Nina at The Savoy. Nina is still annoyed with him. Sonny’s whole family is devastated because of them. If the Corinthos family morale was so important, he says, she should have told them the truth a year ago. Upset, Nina walks off with Maxie trailing after her. Obrecht tells Scott he didn’t need to rub Nina’s nose in this mess.

Valentin and Anna arrive. Martin and Lucy spot them and try to slip out the back but there is no exit. She tells him he could fix this situation by just dropping Valentin as a client and taking her. Martin heads straight to Anna and Valentin’s table, claiming that he is there alone.

Lucy gets Maxie to smuggle her out as the countdown happens. Martin trails after her. Anna and Valentin kiss in the middle of the floor.

Dante arrives at Sam’s as Drew comes down the stairs after tucking Scout in. As he heads out, Sam gives him a hug and tells him he can stop by any time. Once he’s gone, she explains to Dante but he gets it and it’s all good. He says he was with his father and took his keys.

As midnight strikes, Nina stumbles into Charlie’s and finds Sonny at the bar. She stopped by to see Phyllis. As he stumbles off his stool, she tells him he shouldn’t drive and offers to drive him wherever he wants to go. “Okay, let’s go,” he says.

Carly goes to the footbridge alone and calls out for Jason. Drew shows up.

Portia and Curtis go up to his room and have sex.