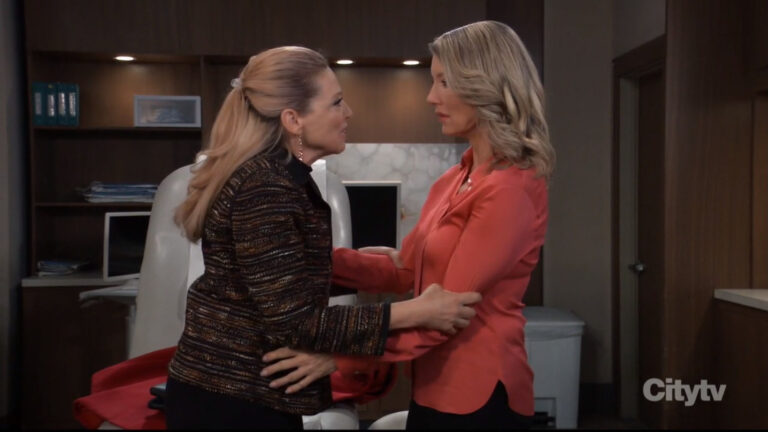 General Hospital recap for Thursday, January 19, 2023. In today’s GH episode, Spencer tells Cam something is off about Joss, Marshall turns down Curtis and Portia’s request, and Michael vents to Joss about their mom.

We also have Wednesday’s GH recap where Valentin and Anna met with his shady contact, Heather met Esme, and Willow forgave Carly while Michael refused.

At home, Curtis and Portia finish the seating chart for their wedding. He teases her about how long it took.

She’s sensing their wedding is coming faster than they thought. He reminds her of their honeymoon in Italy.

They can’t wait to celebrate being together and kiss. Before they can head upstairs, Marshall shows up.

They tell him that their wedding is about their whole blended family. The last time Curtis got married, his father wasn’t part of his life.

It would mean a lot to them if he was involved in the ceremony. They ask him to play a clarinet solo at the ceremony.

“I don’t think I can,” Marshall says. His son is confused.

His father wouldn’t know what to play. He doesn’t have time to prepare anything new.

Curtis assumes there’s more. Marshall claims he wouldn’t want to steal the attention away from them.

His son assumes that’s another excuse. “I can’t!” Marshall insists. He doesn’t trust himself.

Curtis is more confused. His father explains he hasn’t been able to play solo for an audience since his diagnosis.

They assure him it will only be for family but he’s afraid it could trigger an episode.

Portia reminds him he’s never had an episode. He’s afraid he’d only be inviting trouble.

They’ll respect that but they believe in him. When Curtis walks off, Portia asks Marshall why he doesn’t want to take the steps to find out if he was ever properly diagnosed.

Cam jogs into Kelly’s for work. Spencer is there and suggests he’s working to avoid dealing with his bad breakup.

Cam admits he’s angry and wishes he could go a day without thinking about Joss.
Joss walks in. She’s there to get pie for Willow.

Cam heads back to the kitchen. Spencer asks Joss what her problem is. Cam is clearly heartbroken. Should she be steering clear?

She tells him to mind his own business. She won’t avoid the place her grandma owns.
He asks why she and Cam broke up.

“I don’t have the bandwith to deal with you today,” she says. She reminds him they are supposed to be friends and accuses him of siding with Cam.

Joss knows how sweet Cam is. That’s what makes this so hard. Just because they broke up doesn’t mean she doesn’t care.

When Cam returns, she takes off. Cam tells Spencer to stop fighting his battles for him.

Spencer hates seeing him so sad. Something is off with this breakup. The excuses she gave him were meaningless.

He doesn’t think Joss has been straight with him. People who love each other don’t split up for no reason.

Cam is sure that none of this has been easy for her. He repeats that there’s no reason for him not to trust her. He’s sure she was totally honest.

Sonny almost walks out of the General Hospital chapel when he finds Carly there. He starts venting about her keeping it secret that Nina is Willow’s mother.

They rehash Nixon Falls and Carly insists that she didn’t keep this a secret as an act of revenge.

She refuses to accept she owes Nina anything. Sonny asks if she thinks Michael and Wiley deserve an explanation if Willow dies because of a secret she kept.

She thinks that’s a low blow. They bicker about this and her making decisions for other people.

Carly insists that she only kept the secret for Willow’s sake.

“A lot of good that did,” he says. She reminds him he sided with Nina when she took Willow to court.

Carly insists she made her choice for the greater good of the family.

He’s not buying any of this. She did this because she liked to see Nina suffer.

Sonny wants to end the madness.

Carly says that Nina has herself to blame for all her pain. She and Willow hated each other long before she learned they were mother and daughter.

The Sonny she used to know would understand why she did what she did.

He’s changed. Sonny says that means they don’t have to keep repeating themselves.

Austin bumps into Nina as she’s waiting in a consultation room. She tells him that she is Willow’s mother. That’s a surprise.

She tells him that she’s trying to save her daughter’s life. He asks her to give him a shout if she needs anything.

He steps out and calls Obrecht, telling her that Nina needs her.

Liesl soon shows up and thanks Austin for calling. He asks how she’s doing since losing Britt and she says she’s taking it one day at a time.

Obrecht goes in to see Nina, who tells her there’s been a miracle. She’s found out she has another daughter.

Liesl wonders why she’s so upset at the good news.

Nina says that Carly has complicated things. She unpacks all that’s happened.

Nina knew that Carly had it in for her, but this was just cruel. Now Willow needs her but doesn’t want anything to do with her.

Obrecht tells her she’s being a good mother. The longer Nina has to wait for the test results, the angrier she is getting.

The more she thinks about what Carly has done to her, the more she wants to kill her.

Liesl can understand the sentiment but doesn’t think she has it in her.

Nina doesn’t literally want to kill her. But even before Nixon Falls, Carly was undermining her with Wiley.

“I have had enough of it. I am going to make her suffer!” she bellows.

Liesl says she can’t strike back against Carly. Normally, she would not tell her to turn the other cheek, but her focus should be on her family.

She can’t save Willow’s life while she’s consumed with a desire for revenge.

“Do not squander your second chance to be a mother,” she encourages, telling her to cherish the gift she’s been given.

Nina tells him that her aunt just reminded her not to give up on her daughter.

Obrecht tracks down Austin and asks if Esme is still there. He explains she was taken away by the authorities.

She still thinks that Esme killed her daughter and is determined to track he down.

Dex shows up to speak to Michael. They step into the stairwell. Dex tells him how sorry he is about Willow.

Michael tells him to stay on top of the plan to take Sonny down. When he asks if there is a problem, Dex flashes back to having sex with Joss and tells him it’s nothing to worry about.

He explains that he hasn’t heard anything new about the Pikeman deal yet.

Michael thanks him for being someone he can trust.

In the corridor, Michael bumps into Joss. He sighs when she mentions their mom.

Joss is shocked when he explains that Nina is Willow’s birth mother. Their mom has known for months.

If Willow hadn’t of been sick, who knows if she ever would have said anything.

His sister understands why he’s upset but points out that he and Willow didn’t tell anyone she was sick.

Joss can understand why he’s upset but there are extenuating circumstances. Her brother says they don’t change that what their mom did was wrong.

She thinks that people are sometimes better off not knowing things.

Joss urges him to cool off before he speaks to their mom.

When she walks down the hall and bumps into Dex, he suggests they get out of there.

Michael bumps into Carly. She asks about Willow. He’s not happy.