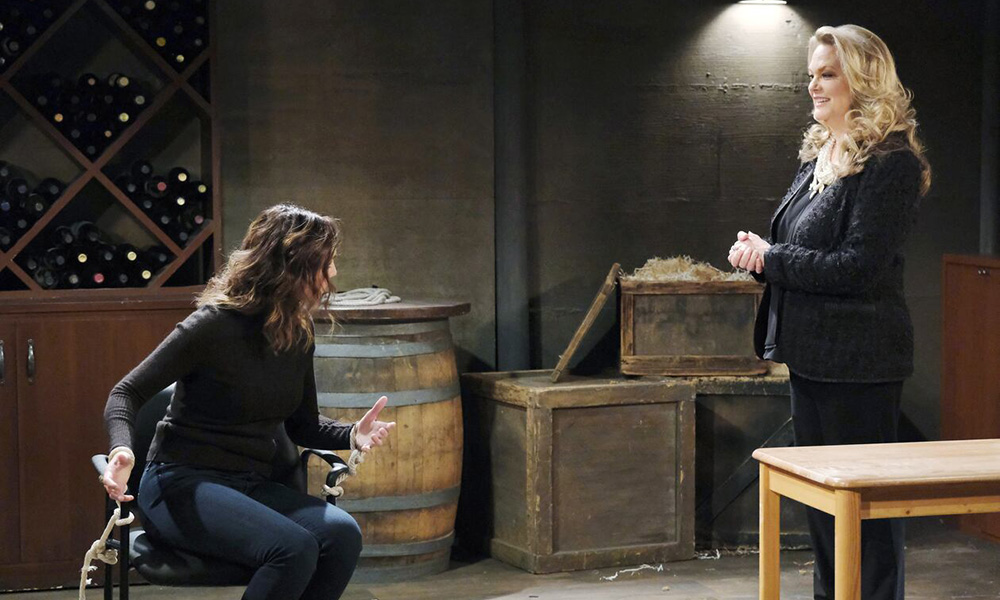 Monday, March 8, 2020: On today’s full episode recap of Days of our Lives, Rafe gets more proof in the murder case, Gwen is shocked at what Anna does, and Ava gets to meet her grandkid.

In the square, Lucas is shocked to hear Belle has agreed to represent Sami in the murder case. Lucas calls Shawn for information and learns she was arrested for murder. Her fingerprints were on the gun. Allie calls this her fault. When Lucas questions her she stammers. Tripp appears. They heard about Charlie. Tripp admits a part of him is relieved that he’s out of their lives for good. They’re surprised. He apologizes. It’s just that Charlie threatened his life. They had no idea. Tripp didn’t want to upset Allie, who has been through enough. Allie shares that her mother was arrested for murdering his brother. He thought Sami was in Europe. Lucas says he did too. Allie apologizes. Tripp asks if she would mind introducing Henry to his mother. Allie’s in.

Rafe arrives home from work to tell Ava about Sami’s arrest. “We found her fingerprints on the murder weapon.” Ava believes justice has been done. She understands why Sami killed Charlie. Rafe’s shocked. Ava realizes she can start packing now that there’s no danger. Rafe tells her to stay.

Sami yells at Belle, “How did you let Rafe arrest me?” Belle reminds her that her prints were on the gun. She quits as her lawyer. Sami begs her sister to stay. She touched the gun but didn’t kill Charlie. Belle asks why she returned to Salem and straight to the rapist’s apartment. Why did she lie to her face? Sami doesn’t reply to any of the questions but she knew her sister would be there for her. Belle agrees to stick around as her lawyer but asks for no more lies. Sami says she wasn’t thinking clearly when she touched the gun. “Are you protecting someone?” Belle says, thinking if Sami wasn’t here, the number one suspect would be Allie. Sami leans in and starts freaking out. She knows her kid isn’t a killer, unlike someone else. Belle snaps at her sister, telling her not to go there. Sami’s sorry. Rafe appears and tells Belle they’ve more proof that Sami killed Charlie. There’s gunshot residue all over her clothing! Sami says she can explain. Rafe goes to meet with the DA. She can expect an arraignment soon. He goes and Belle doesn’t want to listen to Sami. She leaves, too. “You’re on your own.”

In the DiMera wine cellar, Gwen yells for help. Anna arrives, shocked to see Gwen tied up. “Just looking for a nice merlot. Have you any recommendations?” She reveals Gabi and Abby kidnapped her so she’d confess to killing Laura. She refuses since she didn’t do it. Gwen wants Anna to untie her but Anna laughs. “Of course I could untie you. How silly of me.” Gwen shows her a boxcutter nearby. Anna walks by it and grabs a bottle of wine. “You didn’t really think I would set you free?” After what she did to Abigail, she wouldn’t lift a pinky to help Gwen. She takes off.

Chad finds Abby and Gabi at the park. He wants to know what’s up. Why did she blow off therapy to be with Gabi? Abby lies that she wanted to apologize to Gabi. Gabi plays along and tells her to make it good. Abby apologizes and then asks why she’d forgive Abby. Chad smirks. He goes when the women argue again over the apology and Rolf’s drug. They run off to get the drug.

Abby and Gabi return to the cellar. Gwen tells them Anna was there and left her to rot. Abby whips out Rolf’s serum. Gabi records as Abby tries to et Gwen to talk. Gwen taunts Abigail. Upstairs, Chad finds Anna alone. She tells him her lunch was romantic. She takes a drink of wine. “I see you’ve found something in the basement.” Anna almost chokes on her wine, asking what he’s on about. He says the wine. Anna starts to laugh. Chad almost goes to the cellar for wine, but Anna stops him.