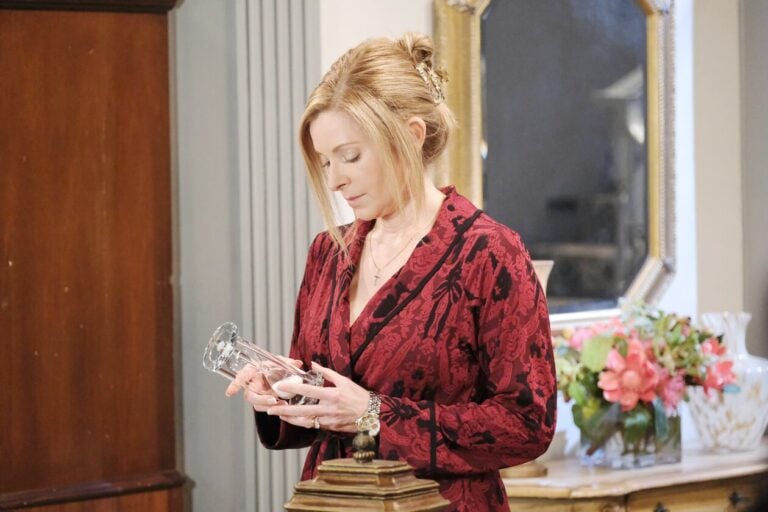 On today’s full episode recap of Days of our Lives, Kate almost spills the beans to Chad, Sarah is caught doing something naughty, and Jennifer is invited to a party.

Philip returns Chloe’s hat to Basic Black. She smiles. She’d been wondering where it was. Chloe’s happy to see him and asks why he turned Brady down for renting space in Titan’s warehouse. Philip calls it a business decision but Chloe thinks it’s more. She urges him to look into her eyes and say no to her. He can’t do it. He agrees to let them rent the warehouse and they shake hands. Chloe’s grateful and gives him tickets to the DiMera New Years’ Eve party, to take Sarah out. As they talk, Chloe admits she doesn’t think Sarah is his type. Philip admits she’s not but he wants to see where it goes.

From the Kiriakis living room, Sarah tries to install a flash drive into Philip’s laptop, while she talks to Xander on the phone. He lets her know every minute without her is torture. They’ll be counting the minutes until they’re back together. They disconnect and Brady catches Sarah in the act. She asks why he’s there. Brady dropped Maggie off and he brought in some things from the garage. Brady asks what she was up to. Sarah says she was downloading something on her laptop to a flash drive. Brady thought it was something more nefarious. Why is she working on New Year’s Eve? Sarah tries to cover. She has nothing to do tonight. Brady heard she and Xander broke up. She was too good for “that scum anyway,” he bites. Sarah defends Xander, which surprises Brady.

Xander finds a glum Jack at the pub. Jack tells Xandy about his affair with Kate and his lie of omission. Xander scoffs. He thinks Jennifer will forgive him. He reminds Jack that his advice got him and Sarah back together. He urges Jack to be persistent with Jennifer. As they talk, Jack learns Xander and Sarah broke up but Xandy won’t give up on Sarah.

Abigail visits Jennifer at Alice’s with a dress she bought for her mama. She invites her to their New Year’s Eve party. Abigail can see she wants her and Jack back together but thinks her daughter should get used to the idea that they won’t. Jenn shows her kid the hourglass Jack gave her for Christmas. She’s still unsure if Jack only had sex with Kate the one time. Jenn fills her in on how she, Julie, and Lucas were sleuthing to find out of Kate checked into Salem Inn with Jack and learned it wasn’t him. Jenn wonders if Saul was trying not to hurt her feelings. They wonder who it was and Abigail realizes it’s Jake. “They came to your anniversary party together,” Abs says. She urges Jenn to get dressed and come over for the party before she heads off.

From the mansion, Chad barks at someone on a call about a late delivery. Kate appears and asks what has him in such a mood. Chad thinks his brother’s trying to steal his wife. He knows that Jake bought that diamond bracelet for Abigail. Kate stammers and then finally says, “There’s something that I have to tell you.” Upstairs, Gwen fakes being Abigail on a call until Jake rushes in and tells her she won’t get away with this. He knows she swiped the bracelet meant for Kate and wonders what Abigail ever did to deserve her wrath. Gwen smirks and fingers the bracelet she’s wearing on her wrist. Jake can see right through her and asks what Abigail ever did to deserve her wrath. Gwen says Abigail treats her like one of the family. She calls Jake’s thoughts a conspiracy theory and asks for the bracelet back. Gwen asks for matching earrings. Jake snipes. He bought the bracelet for Kate. Gwen wonders what Chad would think if he learned Kate was “sleeping with the enemy.” Jake tells her Chad’s his brother, not his enemy. She finally agrees to give him the bracelet back when he grabs her. Gwen thinks “Miss Fancy Pants” will get tired of slumming with the likes of him and when she does, Gwen wants “my bracelet back.” Jake grabs it and goes. Gwen gets back on the phone and calls a hotel to prepare a room geared to romance. Meanwhile, downstairs, Kate insists nothing is going on between Abby and Jake. Chad says he’s hanging by a thread. He needs Kate on his side. Kate insists she is and tells him he’s being paranoid. Jake is not Stefan.

Later, Chad goes to Gwen’s room to chat. Gwen tells Chad that Jake took the bracelet back and wanted to give it to Abigail. Gwen lies that she’s sorry and turns her back, smiling. Jake finds Kate in the living room and gifts her the bracelet. Kate calls it beautiful and thanks him, but she can’t wear it. Chad might see it. Jake’s tired of sneaking around behind his brother’s back. They talk about what a wreck Chad is, thinking Jake’s “sleeping with” Abigail. Kate worries that if he learns she’s the one doing Jake that he’ll see it as a betrayal. Jake doesn’t care but gets it. He’ll keep his distance from her tonight. Afterward, he hopes she’ll wear only the bracelet. Kate can arrange that. They kiss.

Philip arrives home and asks Sarah out to the DiMera New Years’ Eve party. Sarah refuses. She doesn’t think they’re suited for each other. They agree to no hard feelings and she hopes he can find someone else to take to the party. She goes.

Brady finds Chloe at Basic Black, still working. He tells her to go have fun. She could say the same about him. She tells him about Philip renting them the Titan warehouses. Brady’s grateful. They agree to go out together to the DiMera bash.

Sarah meets Xander in his hotel room and shows him the flash drive.

Back home, Abigail tells Jake she knows he and Kate are “sleeping together.” In another part of the house, Jack and Kate realize they’ll both be at the party. Since Jenn won’t be there, Jack says it doesn’t really matter.

In the next full episode of Days of our Lives, Jake confesses.