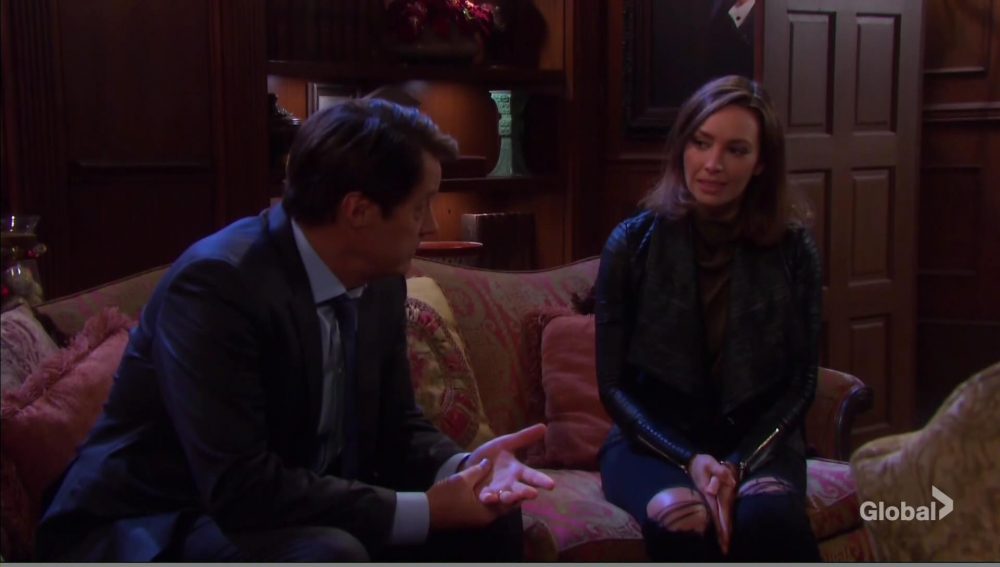 Thursday, December 10, 2020: On Days of our Lives today, Steve and Kayla visit Joey, Bonnie and Justin seem to get their wires crossed, and Jennifer’s suspicions make her question Kate’s plans for a tryst.

Bonnie’s nervous when Justin calls. She hopes he’s not canceling their date. He says no. He only wants to ensure it’s okay he doesn’t wear the cowboy hat she bought him. She doesn’t care what he wears, as long as he shows up. They’ll meet at Julie’s. Bonnie dances around the square with glee.

From Julie’s Place, Jennifer eavesdrops as Kate talks on the phone about meeting at Salem Inn, instead of the DiMera mansion. She disconnects and Jennifer accuses Kate of propositioning her husband. Kate snipes that she wasn’t talking to Jack and arguing ensues. Kate goes and Bonnie appears, having heard the argument. Jenn explains what happened and Bonnie thinks Jack’s petrified of losing her for good. Jenn’s emotions are mixed up. She tells Bon Bon about Gwen’s advice not to forgive Jack. Jenn doesn’t think she can ever trust him again. Bonnie blames Kate for moving in on Jack. Talk turns to Bonnie’s date and she shares that Justin’s on his way. Jennifer’s happy for her. Bonnie’s surprised since she and Adrienne were tight. Jenn thinks everyone deserves a chance at happiness. Justin’s been through a lot. They gossip about Steve and Kayla’s problems and Jenn wonders where Justin could be. Bonnie’s not worried. He’ll show up. When he doesn’t, she calls Henderson to see when Justin left.

From the DiMera mansion, Jack vows not to give up on Jenn. Gwen appears and learns he’s been living in the gatehouse. Gwen apologizes for being so protective of Abigail and attacking him and claims she’s happy that Abby and Jack have made up. “It’s so sad when we’re estranged from our parents.” She pries into his romantic issues and learns that Jack was shot down by Jenn today when he attempted to move forward with her. Gwen says she’s surprised. She lies that she urged Jenn to open up her heart and forgive him. Kate arrives and Jack starts stammering and rushes off. Once alone, Kate lets Gwen know she doesn’t trust her. “I know your type. You want something,” Kate says. Gwen threatens to tell Chad about her and Jake’s relationship. Kate wants it kept quiet and asks what she’ll have to do to keep it that way. Gwen acts like there’s no quid pro quo. Kate accuses Gwen of being into Chad, but Gwen denies it. She claims she’d never betray Abigail. Gwen will keep Kate’s secret unless she crosses her. Gwen goes and Jack returns. He’s uncomfortable being alone with Kate. He needs to keep his distance. Kate tells him to stay and Jack admits that Abby and Gwen tried to help Jenn fight for him. Kate tells him to be careful of Gwen, but when Jack questions her, she remembers Gwen’s warning and clams up.

Tripp visits Ava at Salem Police Department. She wants to make up for lost time with him but is concerned Kayla will get in the way. Tripp insists Kay’s not like that. Ava sputters that Kayla accuses him of raping Allie. Tripp says that does hurt.

At the condo, Steve and Kayla argue about taking steps to ensure Ava’s not a problem for them. Steve needs to go make his case to Trask and takes off.

Kayla finds Justin at home. She needs a lawyer for Joey. She shares that Ava Vitali’s alive.

Steve appears at SPD to tell Ava and Tripp that Melinda Trask is on her way. When Tripp asks where Kayla is, Ava gloats, thinking Kayla is two-faced and scheming. Steve warns her to watch how she talks about his wife. Kayla shows up. She went to get a lawyer to protect Joey’s interests. Justin and Trask show up. She can’t advocate for Joey’s sentence to be overturned. Steve takes Tripp outside the room and asks how he’s doing now that he’s met, Ava. Tripp says it hasn’t sunk in yet. He prays this all works out because he doesn’t want to lose her. Steve rubs Tripp’s shoulder. Meanwhile, in the interrogation room, Justin tells Trask that Kayla won’t press kidnapping charges if Ava doesn’t block Joey’s release or make any more charges against him going forth. Trask is surprised at their demands. Later, Justin tells Steve and Tripp that Trask isn’t happy to release Joey but she’ll do it. Justin has to run the deal by a judge and then Ava and Joey will both go free. Steve apologizes for not understanding why Kay didn’t want to come to SPD. She wanted to get the best lawyer in town on the case. Tripp is ready to go home but Steve says he has to move out. When Tripp decides to go live with Ava, Steve balks.

Gwen visits Jennifer at home and gives her some drawings Thomas and Charlotte drew for their grandmother. Jennifer’s touched. Gwen alludes to something going on at the mansion so Jenn will press for details. Gwen says Kate and Jack were there and Gwen lies that she sensed that they wanted to be alone.

When Justin finally shows up at Julie’s Place with an apology, Bonnie says she knows where he was. With Kayla. Bonnie’s hurt and thinks Kayla wants him back. Justin denies that. “Bonnie Lockhart is no one’s sloppy seconds,” she says. In fact, she made other plans. In walks a man and she takes off with him, leaving Justin wondering what the…

Ava and Tripp arrive at her apartment. He’s grateful she’s letting him stay there. They’re both thrilled they can get to know each other. “If only Patch were here, everything would be perfect,” she says, causing Tripp to furrow his brow.

Next on Days of our Lives, Charlie has a confession.