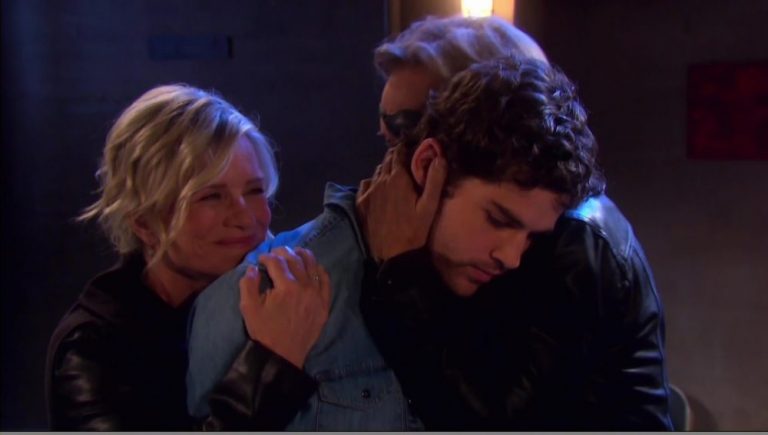 Friday, December 11, 2020: On Days of our Lives today, Joey’s world is rocked, Xander demands the dirt on Philip, and Ava can’t help but disrespect Kayla in front of Tripp.

Steve and Kayla visit Joey in prison. They tell him Ava’s alive. Joey’s stunned. How is that possible? They explain that Dr. Rolf brought her back to life. It means Joey may be released from prison. Joey is upset to learn they made a deal. His release for Ava going free. He wishes they’d have talked to him about this first.

At Ava’s apartment, Tripp hopes his mama isn’t going after his dad and step-mother again. Ava vows she’s not going to cause trouble. She hopes they haven’t poisoned his mind against her. She assumes her son knows about all the nasty things she’s done over the years. Tripp recalls Steve telling him about the kidnapping and Ava raping Steve, and admits the things he heard kept him up at night. Ava’s sorry. This second chance at life has changed her. She promises she won’t mess it up. Tripp admits he gave the mob money she left him to charity. He asks how she’s paying for this place and threatens that if she’s still taking money from her family, he’s out of there. Ava admits she called her cousin Angelo. She’s taking money from the legit side of the business and offers proof. Tripp says no, he’s sorry for acting high and mighty. He’s done some things he’s not proud of. He confesses he held a scalpel to Kayla’s neck once. Ava’s touched he did that for her. Tripp says that’s all in the past and says Kayla was a rape survivor. That, combined with the other evidence such as the paternity test, makes it look bad for him. But Tripp knows he never slept with Allie. Ava wonders if the paternity test was switched by Kayla as payback for Joe. Tripp disagrees so Ava decides she needs to hear the whole story so they can fight this. He talks about helping her back to her place when she was drunk. He got her into bed and wrote her a note with his information and took off. She claims not to have found the note. Ava’s shocked to hear this happened in London. When Tripp goes, Ava leaves an angry message for someone to call her.

Charlie finds Xander waiting impatiently at the park. He wants to know what Philip’s been up to. Charlie tells him about Philip’s breakfast. Xander barks that he wants to know about the shady deals he’s making. Charlie has no information. Xander knows he’s hiding something and demands to know what it is. Charlie admits Philip caught him red-handed. He threatened him with firing. Xander gets it. But he’ll win against Philip. If Charlie wants to be successful at Titan, “Put your money on me.” He asks Charlie to become a triple agent.

At the mansion, Sarah and Philip discuss Christmas. Philip keeps waiting for Xander to storm in and start yelling. He asks if she took Xander’s things to Salem Inn herself. He saw her there late, last night. Sarah claims she took Xandy his things so he wouldn’t have to return there. She says they fought about Philip. Sarah lies that she finally saw him for who he is. “I hate him.” She offers to help get him fired from Titan. Philip’s surprised since she’s given Xander many chances. Sarah says Xander’s jealousy showed her how their life would be if she stayed with him. Philip leans in to kiss Sarah and Sarah jumps up. He read the situation wrong and apologizes for overstepping. He suggests they make Xander crazy by letting him think they’re having an affair. Sarah doesn’t want to make things more complicated and has to go to work. They agree to meet later to discuss the benefit. Once Sarah’s in the foyer, she calls Xandy to meet at his hotel room. Charlie arrives unannounced and explains that Xander bought everything, but he complains he’s not cut out for this.

Kate welcomes Rafe back to SPD. She wrote a glowing press release and is glad he didn’t skip town, like Gabi. Kate learns she’s been implicated in the commission of a felony. Rafe hands over the gun that Allie stole from her with the intention of killing Tripp Dalton. Kate’s shocked. She remembers Sami doing something as drastic to Alan after he raped her in high school. Rafe says Allie’s remorseful but Kate wishes “the bastard got what he deserved.” They argue about whether Allie should be prosecuted.

Allie visits Kate at the mansion. Kate reveals Rafe summoned her to SPD. She takes out her gun. “Oh God,” Allie says. She’s sorry. Kate asks why she didn’t ask for help. Allie wasn’t thinking. Kate says that means she’s now in trouble with the law. Kate says Trask thinks Tripp’s a hero since he married her daughter so she could stay in the country. Allie has a meltdown until she learns that Trask has let her off the hook. “Don’t blow it,” Kate warns, as Allie relaxes. Kate explains that she was once in an abusive relationship with her husband Curtis. She promises Tripp will pay. She has a plan. They’ll go for a civil case.

Rafe arrives at the prison, surprising Kayla, Steve, and Joey with the news that he’s free to go. Kayla cries and they have a family embrace.

Sarah arrives at the Inn and Xander lets her know Ava Vitali’s alive and back in Salem. Sarah says, “That’s Angela Vandecamp.” The woman he saw with Philip. “Bloody hell!” Xander exclaims.