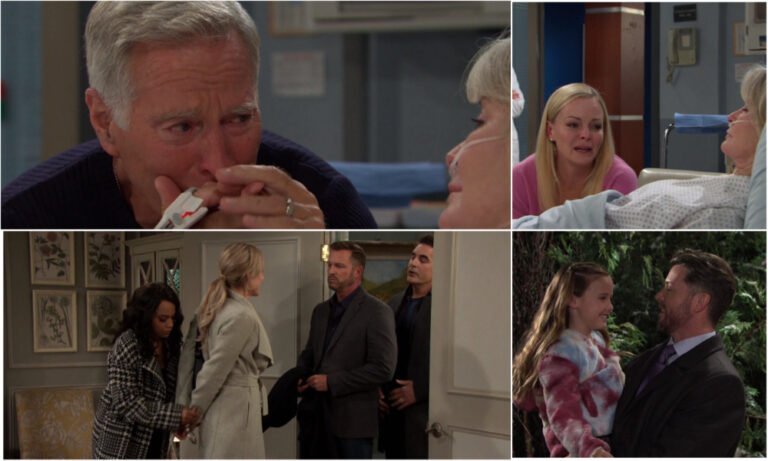 In the last Days recap, Steve handed over Kristen’s confession to Rafe, and Li defended Gabi to Stefan.

In today’s Days episode, Kristen prepares to flee Salem with Rachel, and Belle returns home to be by ailing Marlena’s side.

Outside DiMera mansion, Rafe and Jada go back to square one, since Stefan doesn’t know where his sister was.

At the park, Rachel wants Daddy to go with them when they leave Salem.

Kristen says she and Daddy need a time out so she needs to choose who she wants to be with.

Rachel will go with her as long as it’s temporary and she and Brady work things out.

They pinky swear. Kristen loves her.

They embrace and run into EJ as they depart. “Leaving so soon?” He drawls.

Rachel rushes to him and he picks her up and smothers her in kisses.

Her hair smells like sunshine, he says. He takes Kristen aside and reminds her Brady has sole custody. She’s not supposed to be with her.

Kristen grabs her kid and EJ asks them where they’re going. Rachel spells it out that they’re leaving town because Mommy and Daddy need a time-out. They’re going on an adventure.

“Ho-ho. Or on the lam,” He says with a smile. Kristen gets the kid to go play while EJ tries to call Brady. She swats his phone from his hand.

They struggle and the kid returns. She wants to say bye to Daddy. EJ tells her that’s what he was doing. He was calling Brady.

Kristen privately blackmails EJ into keeping quiet or she’ll tell Stefan that he was involved in the brainwashing.

At the chapel, Allie tells Brady and John that Grandma got a code blue.

John rushes off as Brady and Allie talk about how amazing Marlena is.

In Marlena’s room, Sarah works on Marlena while Eric goes to the hub, just as Belle arrives.

They embrace. He says this isn’t good. She knew she shouldn’t have stayed in Johannesburg for so long.

She would have insisted Claire returned for the holidays if she had known.

She’s pissed that this is all because Kristen wants Brady.

He flinches. Marlena comes back and calls John’s name.

He sits at her side and promises she’ll be fine as Sarah watches, worriedly nearby.

By the hub, Will finds Eric, Belle, and Allie and hugs them while telling them that Marlena’s in palliative care now.

Not quite hospice. Rafe calls Brady and tells him they can’t find Kristen, but that they have her because Steve recorded her confession.

Brady doesn’t know where she is. Once they disconnect, Allie finds Brady at the chapel and tells him what’s going on with his mom.

He tells her Rafe sends his love. He was looking for Kristen to arrest her. She’s glad.

Belle goes into Marlena’s room, sorry she wasn’t there. John tuts her and steps outside for them to visit, while he, Eric and Will pray.

Marlena asks how Claire is. She’s okay and sends her love, Belle says.

She’s left behind in case she needs more therapy.

Shawn stayed, out of concern that she’d have setbacks.

Marlena loves her. Belle insists she can fly over soon and surprise her.

Belle tells Marlena she was the best mother and opens The Secret Garden to read to her.

Afterward, she begs her mom to come back to her as Sarah watches quietly.

Belle sobs that she can’t lose her mom.

Later, Brady learns that Kristen picked up Rachel from school.

He rushes off telling Allie he’s going to kill her while Allie goes to John, Eric and Will to let them know Kristen kidnapped Rachel.

Later, Belle leaves her mom’s room and goes to the chapel with the others while John goes to Marlena, who wants to go home. John cries.

Back at SPD, Jada and Rafe think there’s a mole at the office that tipped Kristen off about the warrant.

Jada and Rafe arrive at DiMera mansion. They prod him for information about Kristen but he gives nothing away.

Rafe gets a call and learns Kristen kidnapped Rachel. They rush off and EJ talks to Stefano’s portrait about how much Kristen is like her.

He only thinks she didn’t spend enough time playing chess. She’s underestimated her opponent in Brady. “This time she’s going down,” he thinks.

Brady arrives home and finds Kristen and Rachel on their way out. Rachel tells him what was happening and sends her to draw while he talks to Mommy.

Brady reads her the riot act for attempting to abduct their kid.

He threatens to tell Rachel who she really is, he’s so angry with her.

He calls Rafe in from the hall and Jada cuffs Kristen while Rafe reads her rights.