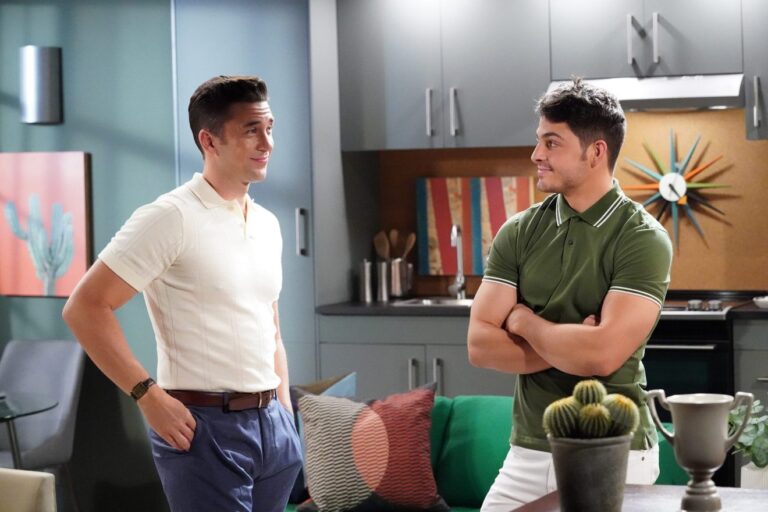 In the Tuesday, September 7, 2021, second full episode recap of Days of our Lives: Beyond Salem. In this episode, Eli and Lani catch one of the thugs, Billie meets another ISA agent who agrees to use Ciara in the operation, and Anna outbids John on the necklace, though she knows it’s a part of the ISA operation. Soaps Spoilers has the first recap of Days of our Lives: Beyond Salem, which showcases plenty of adventure, excitement, and danger with Salemites involved in the mystery of the stolen Peacock.

At the restaurant, the two thugs with guns demand Paulina’s ring. She refuses. “Lady,” he says. Paulina refuses again to give it to the “two-bit hoodlum.” One tells him that he’s “a highly trained mercenary.” He points the gun and the whole restaurant turns to watch. The other thug says that the mercenary “has real issues with empowered women.” Paulina still refuses to give up the ring. She loves it. The mercenary asks if he loves the people at this table. He holds a gun to Lani’s head and she freaks. “Here’s the damned ring,” he says, giving it away, while Lani and Eli chase them down. Abe calls the cops for backup and Paulina worries. “Please, please don’t let anything happen to my baby!” Elsewhere, the chase is over when Eli jumps one of the thugs and pulls him to the ground. The other thug turns around and shoots at Lani but she dives behind a sofa and the other guy gets away. Lani holds the gun to the first guy and Eli identifies himself as the police.”Who do you work for?” He asks. The man refuses to answer. Later, they head back to Paulina’s.

Anna and Tony are shocked to see John and Marlena at Baumann’s auction. “Fancy seeing you here,” Tony says. They discuss seeing Carrie and Austin and Anna is surprised John’s here. He’s looking for something for Marlena in his price range. She likens buying something here to buying a yacht. “If you have a price range, you can’t afford it,” she says, chuckling. They learn they’re bidding on the same necklace. John tries to tell them about the necklace but the bidding begins. As they take their seats, Marlena momentarily wonders if Tony and Anna are the shady people trying to get that necklace. John can’t imagine. Marlena agrees, it can’t be them. They need to outbid Anna. The necklace comes up and the bidding starts at 25 thousand euros. Anna bids and John bids 50 thousand euros. Anna’s surprised he’s bidding against her. A man bids 75, then Anna bids 100. There’s a caller on the phone who bids. At the apartment, Austin hopes Anna and Tony come through with the necklace. Carrie appears and admits she called her mom. There was no answer, and when she calls the front desk, there was no record of Anna and Tony checking in. Austin suggests they used a fake name to hide the DiMera connection. When she is ready to go to the hotel, Austin fakes a text from Tony, who says they got a different hotel and are going to bed and will see them in the morning. Later, John bids 450 thousand euros. Tony thinks Austin should just buy his wife flowers. Anna thinks that’s dumb and some dude bids 475 thousand euros. The auctioneer stops the auction and asks security to remove a man with a bowler hat. The man sneers on his way out. Anna asks why Marlena’s bidding against her. Marlena isn’t, really. She learns they’re bidding for Austin because of their marital discord. Marlena’s surprised to hear about that and shares John’s on official business for Black Patch to retrieve the necklace. The bidding resumes once the excitement’s over and John almost gets the winning bid when Anna bids 500 thousand euros. Tony lifts up John’s paddle that Anna stole and the necklace is sold to Anna. “Sorry,” she says, though it’s clear she’s thrilled. Marlena wonders what John will tell Shane.

Sonny’s upset to find a robbed Leo in the penthouse suite that Will charged to his credit card. Leo’s surprised in turn to see Sonny and takes a gander at Chad.

“Who is this hunk of heaven?”
“I’m Chad.”
“Well, if you’re cheating on Will, it’s deplorable but so understandable.”

He thinks they should celebrate, and goes to calm down for some bubbly. Will appears. “I think it’s time that…Sonny?” Leo tries not to laugh at the scene. He shares that it’s not what it looks like, and Sonny hauls off and hits him. Chad and Will hold the men back and Sonny accuses him of cheating. Will’s eyes widen. He hasn’t forgotten who Leo is or what he did. Sonny cries and asks what’s going on. Leo tells Sonny, “I’m sorry to say, Will only wants me for my peacock.” Will explains about the Alamainian Peacock, which features six valuable gems that were fenced by Hope posing as Princess Gina. He relays the whole story Shane told Marlena and John. When he showed up for a meeting about it, Leo was there. He’s seen the emerald. Leo says it was almost as mesmerizing as my eyes He turns to Chad and tells him his baby blues aren’t bad, either. Sonny asks if they can get back to the peacock. “Sonny, getting back to the peacock has been one of the guiding principles of my life,” Leo retorts. Will says Leo can lead him to the emerald. Sonny can’t believe he trusts the man ad has been meeting with him regularly. Did he lock his wallet in his car? Was he deloused after? “I know he’s not Deep Throat.” Leo sasses, “You never asked!” They both tell him to shut up. Sonny doubts he’ll get a story. He’ll only be blackmailed. Leo reminds them that he’s the one who ended up rolled up in a rug and locked in the trunk of a car. Chad gets in Leo’s face and demands he be forthcoming. Will asks when his contact gets there. Leo swears he has a contact and can get them there tomorrow. He swears but Will won’t pay for another night. Leo guesses he’s going home with them. “Sleeepoverrrr,” he singsongs, happily. Sonny hates this idea. He knows that every relationship has its “tops and bottoms.” Chad corrects him. “Don’t you mean ups and downs?” Leo shrugs. “Those too.” He goes to change and Will vows to take time off so they can go to Paris together. Sonny calls it emotional blackmail, but he’ll take it. Leo returns and asks “Blue eyes” to grab his bags for him. Chad bends to retrieve them as everyone files out to WilSon’s.

A man stops Ciara to ask a few questions and reaches into his pocket. Billie and Ben spot him from outside the antique store and Billie rushes him, tossing him to the ground. She thinks he has a gun but he was reaching for his badge. “Agent Kyle Graham, ISA. Nice to meet you, Agent Reed,” Kyle says. She blasts him for not identifying himself. Director Donovan sent him in as backup. He thought she could use help. She doesn’t need his help but when she reveals she lost the brooch, he thinks she does need his help. He knows the couple who bought the brooch. Miles and Sophie Faversham. Lili Faversham’s grandson and his wife. Billie knows her — she knew Gina. There’s a network behind the brooch. The Faversham’s are having a party tomorrow night. Billie wants to go as Princess Gina, but Kyle says Miles may have met her. It’d be risky. Ciara suggests she go as Princess Gina’s daughter, Greta. Kyle doesn’t like it but Billie says her parents were cops. “Great cops.” She thinks that translates that Ciara would do fine. Billie asks Kyle to help her teach them to dance. Kyle doesn’t dance, but when Billie puts on some tunes, he proves otherwise. They do a sexy tango and Billie gives Ciara her tiara. Later, Ben and Ciara go back to their hotel and make passionate love.