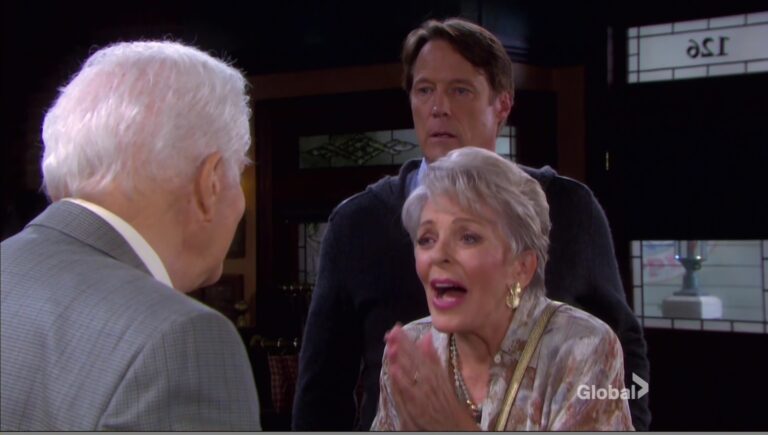 In the Tuesday, September 7, 2021, full episode recap of Days of our Lives, Xander crashes the wedding, and Doug is found. If you missed out, Soaps Spoilers has you covered with Monday’s Days recap: Julie was locked in the freezer.

At Julie’s Place, Julie’s still shivering from being locked in the freezer by Doug. She thinks perhaps their place was being robbed and he locked her in there to protect her. He could be bound and gagged and ransomed. She starts to cry, thinking about what could be happening. Jack asks if they had a fight. She admits they did. Jack wonders if he wanted to take a moment. She guesses. “He’s 96 years old. He can’t get very far on foot,” she says. If she can’t call the cops, she will find him herself. She stomps out. She returns and says the line cook saw him and he didn’t even say hello to her.

On a call from her condo, Kayla’s surprised Bonnie returned to the house to get ready for the wedding. She disconnects and tells Justin they’re headed to the Kiriakis mansion.

At Salem Inn, Gwen’s surprised Bonnie invited Xander to her wedding. They both thought it was odd, but she reminded him that she was supposed to be Sarah’s maid of honor. Bonnie must have taken the money. He flashes back to the entire scene and notices his key card isn’t where he left it. She’ll rue the day she crossed him. He gets angry, but Gwen wonders how she knew he had the money? He has no idea. He’ll show up at her wedding and find out. Gwen calls it her fault. Xander suggests she repay him by lying to Jack. She’s skilled at lying. Jack may not forgive her. Xander’s reputation has never been stellar. Gwen is overcome. Nobody’s ever sacrificed themselves for her. “What can I say? You’re worth it.” Gwen admits one good thing that came of this is that Jack no longer thinks he’s a drug mule, which means they can see each other. Xander kisses her for luck before she goes home.

At the mansion, in her bedroom, Calista holds a gun on Bonnie. “I got yer something’ new here. A bullet through the heart,” she says, brandishing the gun with Bonnie’s prints on it, covered in a blue hanky. Bonnie pleads for her life. She got her a million dollars. Bonnie tries to talk her out of it. Justin’s uncle is like Michael Corleone. “You lay one hand on me and…” Calista says he isn’t even at her wedding. He won’t care. She grabs a pillow to silence the sound. Downstairs, the Justice of the Peace shows up. Steve tells him that Justin’s marrying Bonnie, who is identical to his deceased wife. The man says, “Life can be complicated.” The man goes to get a snack in the kitchen and Kayla and Justin appear. Kay goes to Bonnie’s room. Before she gets there, the women struggle with the gun and it goes off, shooting and killing Calista. Downstairs, the men haven’t heard a thing and Steve tells Justin about Calista hitting on him and how cagey she was when he asked her questions about herself. Justin hopes she goes back to wherever she came from once the wedding is over. Upstairs, Kayla knocks on the door. Bonnie freaks out and tells her to leave her makeup bag outside. Bonnie tucks Calista in and when Kayla appears, she lies that Calista wasn’t feeling well and keeled over. Kayla moves to examine her but Bonnie refuses and is cagey. She lies that the woman had sixteen mimosas and is asleep. Kay notices she’s missing a nail. Bonnie cries that it’s not going as she planned it. Later, Bonnie and Kayla are downstairs and Bonnie’s in her wedding gown, ready to marry Justin. During the wedding ceremony, Calista shows up all bloody, to object. “The bride just tried to kill me!” Bonnie comes out of her fantasy and the wedding commences. When they ask who objects, Xander does. He wants his money back. He tells them Bonnie turned up at his room and stole his million dollars. Justin asks why Bonnie would do that. Bonnie lies that she was in his room to invite him to the wedding.

At the pub, Roman gives Doug his favorite burger and fries. He takes a bite and seems to be in bliss. Roman asks where Julie is. Doug says she’s very busy watching his cholesterol. “Last night she tried to give me some quinoa when he prefers fries.” Roman gives him a beer and vows not to tell Julie. “That’s awfully nice of you, John. Thanks.” Roman says it’s fine but his name is Roman. Doug says, “Of course it is.” They talk about the olden days. He talks about John getting back together with Vivian and Roman says, “Marlena.” Doug knows. He didn’t realize he called her Vivian. “I must be losing it, John.”

Back at Julie’s Place, she gets a call from Roman, who shares that Doug’s at the pub. “Tell him that I’m worried sick and that he’s to come back to the restaurant, immediately,” Roman tells her to come there, instead. Julie and Jack show up and she’s thrilled her husband is okay. She tells him about locking her in the freezer. “I would never do that,” he says. He thinks she confused him with someone else. Julie looks shocked. Jack thinks they should all go home but Doug’s not done his burger and has his eye on the cake. Roman wraps up his food to go and everyone looks at Doug as though he’s losing it.

Back at home, Julie tries to tell Jack that Doug’s just tired. Jack explains that when she was getting Doug into a car, that Roman told him Doug called Roman John and he confused Marlena with Vivian. Jack thinks Doug needs to see a doctor. Julie is sure he just needs rest. Doug thinks he needs to be examined but Julie refuses. Gwen arrives and tries to sneak upstairs. Gwen asks if Julie’s okay. Julie thinks she was praying that she turned into a popsicle. She goes upstairs to check on Doug. Gwen asks what’s wrong with him. Jack admits they’re not sure what is wrong. Jack asks her about what Dr. Snyder was blackmailing her about. Gwen gets scared and claims she has an errand. She runs off.