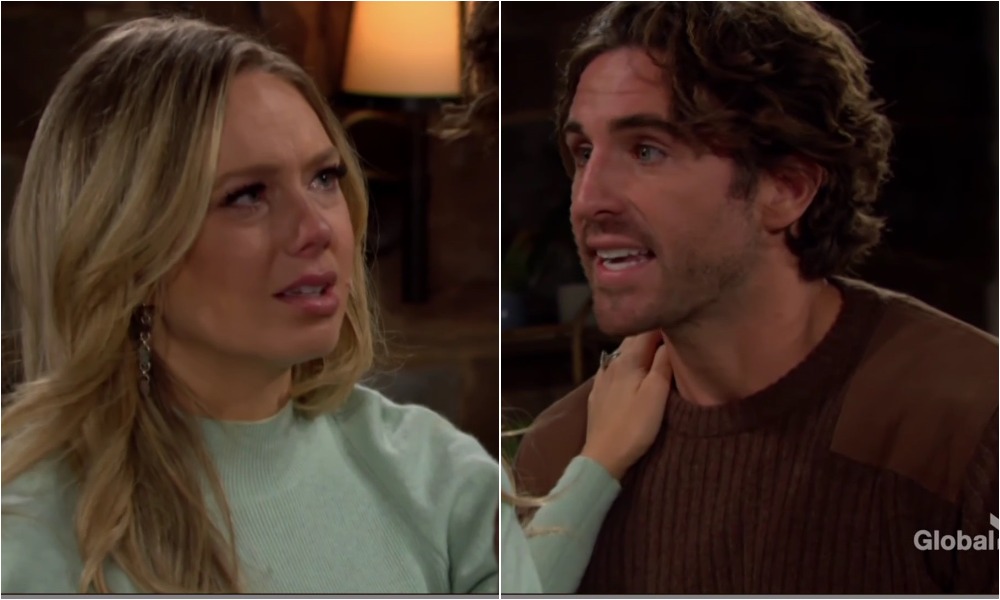 Canadian Y&R day ahead recap for Friday, November 26, 2021 episode, which airs in the USA Monday, November 29. (Recaps live by 5:45 PM EST daily.) In the previous episode, Phyllis had a fun ride with Gloria as she tried to figure out how Jack fit into her future. In this episode of CBS’ The Young and the Restless, Abby’s shocked that Chance isn’t coming home, Jack talks to Ash about his feelings for Red, and Amanda gets Phyllis to think more about Jack, while Devon and Victor discuss Abby going to Spain.

On the Abbott jet in Valencia Spain, Jack tells Ashley that Abby isn’t there. They’ve been to every hotel in Valencia. Ashley can’t stop their search. She’s probably keeping a low profile. Jack says she doesn’t exactly blend in. Ashley is sure that she’s there. Maybe she disguised herself. Phyllis calls and asks Jack how the search is going.

He fills her in and she thanks him again for a lovely Thanksgiving. They disconnect as Amanda strolls up at Grand Phoenix. Victor calls and Ash says she’s considering splitting up. They wonder if Victor’s team has any other ideas. Vic’s been thinking of the military pin they found. Maybe she contacted someone he served with in Iraq. Victor asks Ashley to be careful. They disconnect.

Ashley wants to talk about his conflicting feelings for Phyllis. Jack’s not sure he’s interested so Ash promises to try to keep an open mind. He admits his feelings for her resurfaced but he’s not sure what to do with it. Starting a new relationship is fraught with pitfalls. She gets it, because of their history. She thinks he’s fallen back in love but she’s coming out of a relationship.

Ashley reminds her brother that she jumps from relationship to relationship. She warns him to think things through before he jumps. He thanks her for her sisterly advice. Talk turns to finding Abby.

At Kim Dunaway’s (Roxanne Hart) house in Majorca Spain, Abby paces. Kim tells her she should rest but Abby’s too excited to see Chance. This is the most alive she’s felt in weeks. Has she seen him? Kim has. Abby’s full of questions and excitement. She asks to see him as soon as possible.

Kim’s “not accustomed to that American energy.” Kim will take Abby to see him but there are some things she needs to know first. Kim says after the bombing, Chance’s leg was hurt and he had a concussion. She was a medic in Iraq. They cleaned his wounds and gave him a place to rest. They knew they were putting themselves in danger by helping him.

Abby’s grateful and calls her a Godsend. Kim calls him one of the best. A great man. Abby nods and smiles. Kim says to prepare for his rage and guilt that he has due to losing those in the bombing. Being separated from Abby has taken a toll. Abby asks why he didn’t reach out. Chance shows up. He says she knew it’d put her in terrible danger. Abby jumps up and hugs Chance.

She was so afraid she’d never see him again. He’s been dreaming of her. He’s sorry the mission took so long and that he made her suffer. Abby’s just glad that he’s alive and they’re together. Chance says it’s too dangerous. Kim never should have brought her here. Abby never would have stopped looking for him. They kiss and embrace.

Chance worries she undid all of the work he did making everyone believe he was dead. Abby assures that nobody can track her. She tells him he’s a father. Chance is blown away. She shares his name is Dominic Philip Newman Abbott Chancellor. “He’s perfect. That’s my boy,” Chance says. Abby says he’s with Devon, who thinks she’s taking time off to think about everything. Chance worries that everyone will know she’s in Majorca.

Chance finally tells his story, that he was 30 yards from the door to the safe house when the bomb blew. A beam landed on his leg. “I was in so much pain,” he says. He wish he had lost consciousness. He heard screams and was able to get up and go inside to see who he could save. He didn’t find anyone and the devastation was overwhelming. He didn’t have time to think about it. The guys who planted the bomb showed up to ensure there were no survivors so he buried himself under concrete.

He wanted to stay close to monitor or the situation but was in bad shape so he had to find Kim for help. He trusted them to keep him a secret. He snuck on to a freighter to Majorca. His head was throbbing and he could hardly see. He barely made it there.

He contacted his director and they agreed for the sake of the mission that they couldn’t tell anyone he survived. This breaks Abby’s heart what he went through. She’s there for him. She’ll take him home, safely and anonymously. “It’s time to leave this place behind.” Chance can’t go yet. He has to stay there.

At Crimson Lights, Devon thinks about Abby leaving the baby with him. Nate sits and they talk about how many sweet potatoes they had at Thanksgiving. Nate was in bed by eight, while Devon had dinner and then took Dom to see his grandparents.

Nate discusses the changes to his new job and doesn’t think it compares to Devon running a company and caring for Dom. Devon wishes Abby never left because they’re worried for her but she trusts him with her son and he’s enjoying every second of watching the little guy.

He tells Nate that the child is doing “tummy time,” and that he’s crushing milestones. Nate can see how much the boy means to him. He hopes he’s prepared for what comes next when Abby returns. Devon will be okay. He knows Abby’s his mom.

Y&R’s Jamison Jones out as Gaines

Jess Walton is back at Y&R

Back at Grand Phoenix, Amanda notices Red disconnect a call. She hands over a Mimosa to celebrate Sutton losing his case. Amanda smiles. The sentencing doesn’t happen for a few weeks. She shares that her sister and mom are fine with this and they’re glad that they’re not under his thumb anymore.

Phyllis knows she wanted justice for her father. Now she has it. Amanda gloats that after everything that man did, they’re still a family. Phyllis says that’s what happened due to forgiveness on her part. Amanda’s life is richer with them. Phyllis tells her friend she won. “Maybe it was your dad looking over you like a guardian angel.”

Amanda likes to think he’s looking out for her and is proud of her. Phyllis offers her a spa treatment but she wants to talk about how Phyllis was beaming while she was on the phone, earlier. She thinks that her friend has done soul searching and that there’s more going on between her and Jack. Phyllis seems surprised. She doesn’t understand her feelings for him. It scares the hell out of her. She calls him kind, generous, witty…”He has an edge.” It’s complicated.

She loves Nick, but they had a lot of misunderstandings and miscommunications. “I was always on guard.” It’s not like that with Jack. “I can be me.” She asks if she’s ready for that. Amanda tries to talk her into going there.

At home, Devon gets the baby to sleep while he talks to Victor about Abby’s trip. Christine’s angry with Abby for ignoring the warnings and going to Valencia. Victor assures Devon he’ll find her. He’s grateful to Devon for bringing the tyke to Thanksgiving dinner. It helped them while they struggled without Abby’s presence. They talk about how stubborn Abby is.

Victor gets a call. He calls Jack and Ashley who spoke with Christine. There was nobody who survived for Abby to have spoken with after the bombing. They’re still looking for those he worked with in Iraq. Ashley worries that her kid will fall apart when she can’t find Chance.