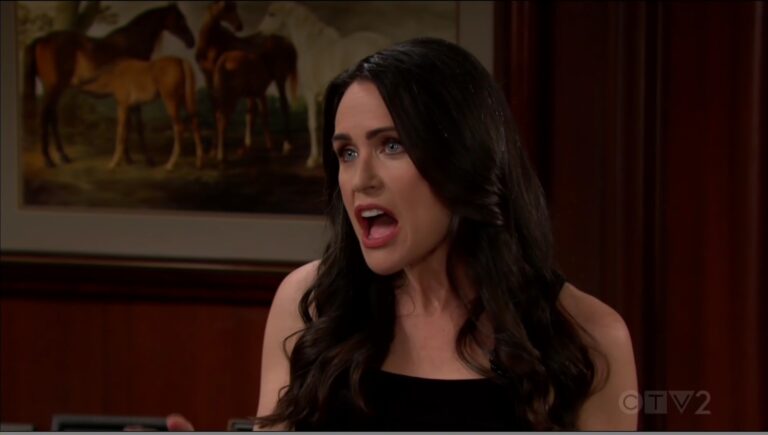 In the Friday, May 27, 2022, full episode recap of CBS’ Bold and the Beautiful, women argue over the men in their lives, Eric goes to play pickle ball, and Thomas vows not to go down that dark road this time.

We also have Tuesday’s B&B recap where Brooke worried to Hope about all the time Liam spent with Steffy and Li caught Steffy and Liam in an embrace.

At the house, Quinn learns that Eric can’t spend time with her because he’s going to the club. She’d be upset but says she’s glad he’s taken an interest in pickle ball. She notes he’s still wearing her ring. He calls it a gift from his talented wife. She goes and Brooke lets herself in.

At the Cliffhouse, Taylor asks Thomas to tell her why he kept Sheila’s secret. He didn’t want to but he saw how close she was getting to “Dad.” He’s not trying to justify it.

He’s not backsliding into ‘old Thomas’. Taylor doesn’t need her kids to Parent Trap her and Ridge. He claims he knows. He agrees he’ll try to talk to them in the future.

He’s tired of his dad always choosing Brooke over someone who makes him happy. “Good old Saint Taylor,” Taylor jokes.

At Forrester Creations in the design room, Paris daydreams about getting into Carter’s pants. Her mama interrupts and assumes she’s thinking about Zende. Paris tries to get rid of her mother. It doesn’t work.

Her mama rides  her for not going back to Zende. “Do you ever stop?” Paris asks. Her mom says no. She doesn’t want her to make the same mistakes as she made. Paris doesn’t care. She wants Carter and asks Grace to understand.

In the main office, Zende interrupts Carter’s fantasy about sex with Quinn to confront him about Paris having a thing for him. If he wants to be with Paris, he can go ahead.

Quinn walks in as Carter says he can’t be with Paris no matter what she says. Zende asks why. Is there another woman in his life? Carter spots Quinn. He’s not seeing someone else, so Zende tells him to go for Paris.

Quinn apologizes for interrupting when Zende’s on his way out.

Quinn and Carter discuss how he can’t be with Paris, “Feeling the way I do.” Quinn wonders if Paris heard her. “Or is she still on the prowl?” She asks, making claws of her hands.

Carter laughs. They discuss the ring Quinn got Eric. She hasn’t told him that it measures his heart rate. She doesn’t want to worry him. Paris arrives and hears Carter say that she’s everything a man could want and so much more.

Paris smiles as they see her standing there. She assumes she’s interrupting something personal. Quinn thinks she’s being catty and denies anything going on.

She remembers that Paris blabbed that she had an affair with Quinn. “I didn’t blab,” Paris says, defensively. Carter crosses his arms and listens. Paris takes pity on Eric who would never cheat on her. Quinn stops her there and reminds her she’s the bosses wife.

Back at Eric’s, Taylor walks in on Brooke trying to enlist Eric’s help in getting Ridge back. Taylor calls her out on this. They bicker and Eric steps in.

They both have an agenda where Ridge is concerned but he won’t take sides. Taylor says that’s good but Brooke would appreciate it.

He has to get to “the gym,” and tells the women to “play nice.” Brooke says that Stephanie would plead Taylor’s case with Ridge if she were still alive. Taylor isn’t so sure since she died in Brooke’s arms.

Still, they shouldn’t pressure him. Brooke thinks that should include her two “grown children.” Regardless, it doesn’t change that she and Ridge are married. She asks if she needs to remind the brunette of that.

They talk about how Brooke let Ridge down in her marriage. Brooke owns it but thinks he should come back to her. Taylor says it won’t happen. He knows she loves him. “You’re talking about my husband!” Taylor says he’s taking time to think about what he wants. “Happiness and  stability.”

She can provide it and isn’t sure Brooke can. Brooke calls it predictability and says Ridge craves passion. Their love, life and passion will survive.