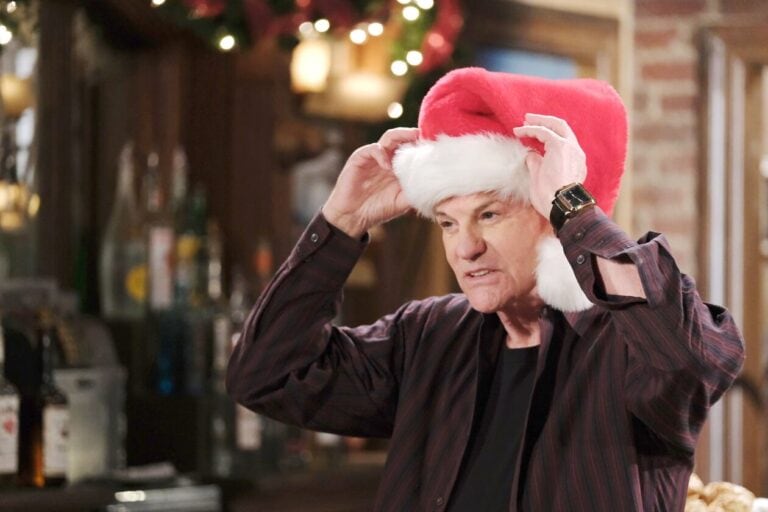 On today’s full episode recap of Days of our Lives, Stephanie refuses to talk to Steve, Val returns to see her grandbabies’ birth, and Sami makes an appearance of sorts, at the pub.

Joey visits his Uncle Roman at the pub on Christmas Eve, for the first time since being released from prison. They hug and discuss Tripp. Joey’s happy to see Caroline’s Irish Soda Bread Biscuits are fresh from the oven. Joey eats one as he takes a call from Stephanie, bummed that she won’t be in Salem for Christmas. They agree to video chat and he thanks her for all the letters she sent while he was in prison. Her positivity got him through his darkest days. Stephanie offers him a job and he happily agrees. He can go to Seattle anytime.

Steve visits Tripp at Ava’s and learns she’s still not home. It’s been two days, and she’s not answering her phone or responding to texts. Steve thinks she skipped town. Tripp shows his dad the letters Ava wrote over the years. All she ever wanted was to spend Christmas with him. Steve goes and Tripp reads a Christmas card from his mother. Later, he calls Rafe to tell him his mom is missing and he’ll be down to file a report.

Abe finds Eli at the hospital and learns Lani’s still in labour. In her room, Lani learns from Kayla that everything looks great, though it’s taking a while for labour to begin. Suddenly, Lani has another contraction. Christmas music plays as she realizes her babies are coming — today! Out in the waiting room, Val (Vanessa Williams) surprises Eli. They embrace and Kayla appears. It’s time to deliver the babies. Later, the first baby born is a girl, who has a good set of lungs. The second baby is a boy. Eli and Lani hold their babies as Eli tells her how impressed by her strength and bravery. Lani admits she was afraid something bad was going to happen. Later, Abe and Val get to hold the babies and learn that they don’t have names yet.

Steve arrives at the pub as Joey’s disconnecting from Steph, who didn’t want to talk to their father. Joey tells his father she’s upset she can’t be there for the holidays. Steve tells him about Lani going into labour. Lucas and Allie appear and when Tripp shows up, things are awkward. Tripp leaves and Roman’s ready to have a video chat with Sami, so he invites them to join him. Lucas ensures his hair looks good and Roman calls Sami. They chat until Henry wakes up, and Roman shows him that “this entire kingdom could be yours one day.” Roman says he looks like a Brady, but he hopes that Henry gets all the wonderful Horton personality traits, too. Allie shows the baby to Sami. Roman accidentally talks about the circumstances of Henry’s conception, not realizing that Sami didn’t know. Sami asks what they mean. The men leave the room and Allie reveals she was raped. Sami’s visibly disturbed. “No,” Sami says, crying. Allie was struggling and was afraid that… Sami says, “That I’d make it about me?” Sami’s sorry this happened and that she didn’t feel she could come to her. “What can I do?” Allie asks her to love Henry the same way she does. Sami says she’ll do that and wishes she could hug her. Sami is rocked to hear it was Tripp Dalton who raped her. Sami’s supportive and says there’s nothing she won’t do for her. Allie can lean on her. Later, Sami’s gone and Roman apologizes for opening up “my big mouth.”

Back at the hospital, Steve is dressed as Santa, AKA Patchy Claus. Kayla says she still makes him feel like a kid on Christmas morning. The little kids show up and Kayla starts to read the Christmas story from the bible to them, as Patchy Claus hands out gifts. Meanwhile, in Lani’s room, Val, Abe, Lani, and Eli enjoy the twins. Eli and Lani talk about how they both did “something stupid” but that it’s all behind them. Later, Joey turns up and tells his parents he’s going to move to Seattle to work with Stephanie. They both tear up but are happy about his news. Joey reveals he’s leaving tomorrow. Kayla dries her tears and Joey goes to call Steph to tell her when he’ll be there.

Lucas turns up at Ava’s to see Tripp.

In the next full episode of Days of our Lives, Lucas confronts Tripp about raping Allie.