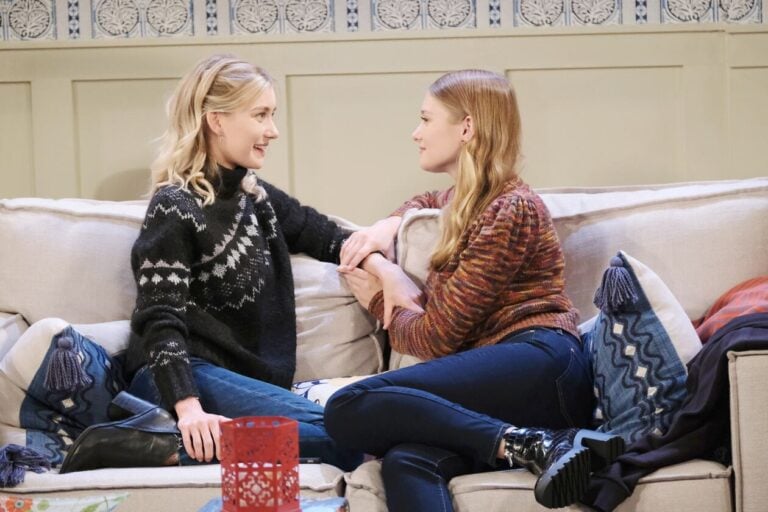 On today’s full episode recap of Days of our Lives, John is angry that Steve sends him a gift for Christmas, Lucas threatens Tripp, and Steve comes up with an idea of what could have happened the night Allie was raped.

At the townhouse, John and Marlena get romantic as she brings in a gift from outside the door. It’s from Steve. John’s not interested so she reads the card. Steve talks about them being in bad places before, and it never stopped him from buying his old pal booze. John thinks Steve has a lot of nerve and rips the card up. The two argue about whether he should forgive a man who won’t believe in Allie claiming Tripp raped her. They go over that for a while.

At Charlie’s place, he makes Ava a little food. He tries to feed it to her but she’s not hungry. She agrees to one bite, but it’s terrible, so she refuses the rest. Charlie gets pissed and throws the dish at the wall, smashing the bowl. His mother didn’t teach him to cook, he complains. A call comes in and he ignores it. Ava asks why he came home early. He admits Allie Horton was there. She didn’t recognize him but said he looked familiar. Ava can see why he wouldn’t want to be around the woman he violated. This makes Charlie a little crazier and he threatens to gag her again. Ava vows to help him if he needs her, and urges him to turn himself in. Charlie yells about how she only cares about her precious Tripp. Charlie realizes letting Ava go isn’t an option.

Lucas visits Tripp at home, to ensure Tripp pays for what he did to his daughter. Tripp insists he didn’t have sex with Allie. Lucas blows up, thinking Tripp’s calling her a liar. Lucas would shoot him “between the legs” if he had a gun right now. Lucas learns Allie pulled a gun on Tripp. Lucas grabs a letter opener and threatens to make him pay.

Nicole finds Rafe in his office at SPD. Holly’s napping and then making a dollhouse with Maggie, so Nic wanted to thank Rafe for last night. She jokes that Santa ate too many of his cookies. She hands over his gloves that he left behind, and sees a file about Ava Vitali. Rafe admits she might be missing. They ponder what happened to Tripp since he was supposed to be there by now.

Steve drops by the hospital with flowers for Kayla. They talk about Joey leaving and Stephanie not returning for Christmas. Steve tells Kayla about Allie’s detailed story of rape and how she recalls Tripp’s face and a hand. She called it ‘a hand’, not ‘Tripp’s hand’. What if there was a second person? Kay asks how he explains the DNA. Steve says he could be related to Tripp. Hypothetically, they agree that someone who shares Tripp’s DNA could be the father. “But who could that somebody be?” Kay asks. John interrupts and Steve shakes his head. Looks like his pal is there to return his Christmas present. Kayla leaves them to talk

At Hope’s, Claire and Allie chat about Charlie leaving the celebrations early. Claire opens Charlie’s gift. Two tickets for a Valentine’s Day concert. She swoons and Allie tells her to go over to his place with her gift and surprise him. Claire doesn’t have his address.

Rafe stops Lucas from stabbing Tripp at Ava’s house and sends him packing.

Allie visits Marlena at home. She reveals Sami knows about the rape now. She wishes her mom could hold her.

Rafe and Tripp go to SPD and discuss how Tripp believes his mama’s in trouble.

Back at Charlie’s, he threatens to strangle Ava with the gag and she screams as Claire shows up at the door, calling his name. Claire doesn’t seem to hear Ava’s cries. Ava shuts her mouth and Charlie looks panicked.

In the next full episode of Days of our Lives, Claire catches Charlie…