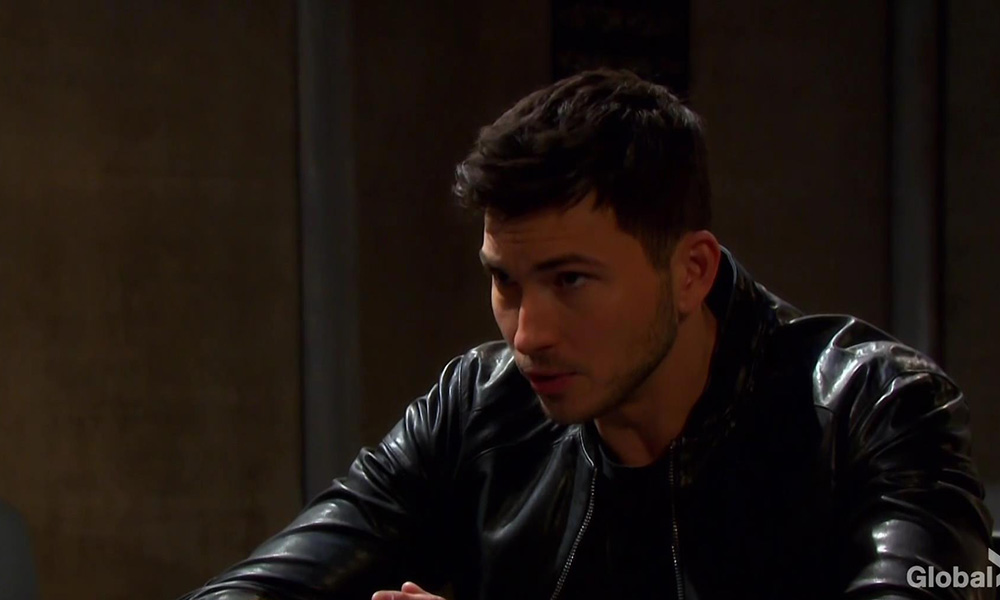 Friday, March 5, 2020: On today’s full episode recap of Days of our Lives, Gwen taunts Abigail, Evan admits to Ciara that Ben’s alive but not for long, and Kate and Jake cross Gabi and Philip.

Gwen wakes up in a room in the DiMera tunnels wondering where she is. She recalls having a drink with Gabi and passing out. “Double-crossing bitch,” she snipes.

Ciara’s cocky in her glass cage as she tells Evan she knows Ben’s alive. He snarks that she must think she has a psychic connection. She does and tells him to stop wasting his time. Evan admits, “Fine. He’s alive.” He tells her he won’t be that way for long. They verbally spar and she begs him not to hurt Evan. She tries reasoning with him. He doesn’t care. He’s off to kill Ben and will bring real proof back.

At the hospital, Ben takes Clyde’s call. Clyde has news for him about Ciara and says to get to Statesville, pronto! Ben arrives moments later and Clyde reveals Ciara is alive! He knows because “That Orpheus dude” was shooting off his mouth. Ben thinks he’s playing Clyde but Clyde explains how he found out through Orpheus, who has been calling Evan. Clyde reveals he shivved Orpheus and he’s in the clinic. He’ll be fine. Ben worries he’ll retaliate but Clyde says he can take care of himself. He hands Ben the phone so he can use it to find Ciara.

Abigail is almost caught coming in through the tunnel door at DiMera mansion by Chad. He tells her he’s glad she’s moving in and that they don’t have to sleep in the same room. She thanks him. He admits he set up an appointment for therapy for them. Abby’s into it until he says it’s in an hour. She asks to cancel. She has other things to do that are more important. Chad asks if they’re more important than keeping their marriage together. She throws Gwen in his face and he apologizes. He deserved that. He’ll change it to next week. Abby goes back to the tunnel to Gwen, who is surprised to see her. She quickly realizes she’s been duped. Abby wants her to go on record saying everything nasty she’s ever done to her and her family. She starts to record. Gwen refuses to say anything. She taunts Abby, saying that one time Charlotte asked if her mommy loved her. When that doesn’t work, Gwen taunts her about sex with Chad and how he said he’d never been hot for anyone else the way he was with her. Abby tells her to shut up and goes, telling her to get used to her accommodations. Gwen shrugs. She’s used to not eating for days on end. She’ll just scream. Abby says it’s a soundproof room.

Upstairs at the mansion, Chad reappears and can’t find Abby. Anna wanders in asking if he’s seen Tony. She has a champagne lunch surprise for him. He hasn’t and he talks about the canceled therapy session. Anna urges him to have patience. She is heading down to the wine cellar to get the booze for lunch. She’s excited to spend time with “my Tony.” Later, Anna opens the door to the room Gwen’s being held in and sees Gwen tied up.

Gabi’s upset that the sign isn’t on the door yet for Gabi Chic in the square. Philip tells her that the city is stopping construction. Gabi’s furious. Kate and Jake appear. They gloat that they’re responsible for this. Jake announces that Kate’s working for him now. Gabi doesn’t care. The landlord agreed to let her renovate. Jake shrugs. She shouldn’t have signed a contract before she had a lease in place. They admit they now have the lease. They’re thinking of putting a Basic Black store there. Philip’s not happy with his mom. “Believe it, Chica,” he says to Gabi when she finds it unbelievable. Kate and Philip leave while Jake and Gabi snark at each other. Gabi vows that when she wants something, she never gives up. Abigail pokes her head in and grabs Gabi away to rant about Gwen.

By the pub, Kate tells Philip she is working for DiMera. He asks if she’s proud of himself for stealing Gabi’s store out from her. Kate doesn’t care. It’s prime real estate. “You’re making this personal,” Philip says. Kate snarks that Gabi’s doing that with Jake. Philip reminds his mother that when old lovers are at each other’s throats that things can quickly turn sexy. Kate goes back to Jake to tell him Philip was giving her unsolicited advice. She ignored it. Jake tells her that Abigail came to find Gabi. It’s strange since they hate each other. Kate looks suspicious.

In the square, Abby asks for Rolf’s drugs so she can threaten Gwen with them.  The quicker they do this, the faster she can get Jake back. Gabi reluctantly agrees to it. They turn around and Chad’s standing there.