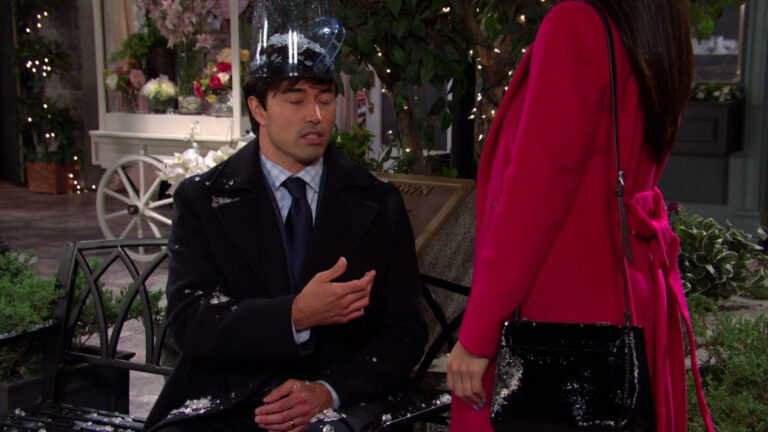 In the last Days recap, Joey and Tripp shared emotional memories of Kayla as they returned to Salem, and Brady was outraged by Gabi’s request, while Steve strangled Kristen and planted a bug.

Chloe visits Kristen at the DiMera mansion to confront her about stealing her life.

She pushes her way in and bitches about everything Kristen did to her and Stefan and Brady.

Kristen suggest she put this into a strongly worded email. Chloe’s having fun doing it in person and blames her for Kate and Kayla’s deaths.

She reads her the riot act for Marlena clinging to life and Kristen feigns innocence.

Chloe says Brady told her she’s been blackmailing him. Kristen shrugs Chloe off and gets a drink. She thinks Chloe’s coming unhinged.

“No! You do not get to gaslight me,” she yells. Kristen pushes her away and Chloe scrambles as she grabs the fireplace poker and threatens a laughing Kristen with it.

She asks what Chloe’s going to do. Kill her with it? Chloe just might.

At the hospital, Brady blames himself for Steve and Roman losing their wives.

He’s afraid his dad will join them. Johnny knows Grandpa John will find a way to save them.

Brady heads to the chapel. Once he gets there, John worries that something has happened to Doc.

Brady just wanted to check on him.

There’s no change. John’s relieved but can’t believe he’s losing her. He tears up. Brady is sorry.

It’s his fault. John says he was in an impossible situation. Brady knows his dad knew something was wrong.

John remembers finding Brady rooting through her things and Kristen finding them.

“It was like she sucked the life out of you.” Brady wishes he would have taken the risk. “Kristen should be locked up,” he yells, tears filling his eyes.

John tells him to stop it. He has nothing to apologize for. If he would have told him about the blackmail, Kristen might have done something terrible.

Brady’s the reason Kristen didn’t let them die in the first place. John says Marlena’s a fighter and their story is far from over.

Brady remembers all the crap he gave Marlena when he was a kid. John laughs that he was a handful but none of that matters now.

Brady loves her like his mother. John knows. It’s why Kristen threatened Marlena. She knew he’d do anything to help her.

Brady knows she’d have done the same thing. John has all of his Black Patch agents looking for Rolf.

He touches the cross and starts praying.

In the waiting room, Johnny finds Allie. She says Will and Eric are in with Grandma.

There’s been no change. She fights tears and the twins embrace.

Allie’s glad that she and Kate were on good terms after what happened with her father.

Johnny knows Kate knew she loved her. Allie sobs in his arms.

She says Grandma’s love and strength helped her get through being raped by Charlie.

Johnny knows Marlena touched so many lives. Johnny talks about his movie and how he could have written the story of a woman who changed the world, suffered tragedy and heartbreak and never let it change her.

“The story of an icon.” Allie would have watched that!

Later, Allie rushes into the chapel and tells Brady and John to come quick. It’s Marlena.

At SPD, Indonesian authorities searched Rolf’s secret lab and every DiMera property and still can’t find him. They have nothing.

Steve waltzes in and plays the recording he made of Kristen’s confession to Rafe and Jada.

He tells them he planted a drug while he distracted Kristen, though he won’t tell them what he did to distract her.

Rafe says this is great, but they can’t use it as evidence. Steve sighs.

He thinks about it and says Johnny might know that he was being recorded.

Rafe can see Steve’s grasping at straws but he can’t falsify evidence.

Steve asks him to go to the DA. He can’t. Jada might have a loophole.

Rafe calls Johnny to come to the station, so Johnny leaves Allie at the hospital since she has other friends and family to lean on while he goes.

Johnny arrives at SPD and the cops play the recording.

Steve and Rafe ask if he’ll testify against Kristen since he heard this recording firsthand. Johnny’s in. Steve thanks him.

Outside of Salem Inn, Li demands Stefan apologizes to Gabi so Stefan says he’s sorry she is a bottom-feeding snake.

Li punches him in the face and Gabi’s eyes bug out as Stefan goes down.

Stefan calls them even after he knocked him on his ass earlier.

Li says this is about Gabi. Stefan scoffs at that. He should thank him for brainwashing him because he probably would have ended up hating her on his own.

He goes and Li tells Gabi Stefan’s wrong about her. She’s a passionate person.

Gabi doesn’t want to hear that from him.

She shoves him away when he tries to comfort her.

He winces hard. She notices his hand is bad. She thinks he should get an x-ray. He tells her it was worth it.

She snipes that nobody told him to defend her honor.

Still, she goes to get him ice, making him smile to himself.

His smile is short-lived when she returns with a bucket of ice and dumps it over his head.

“What the hell!” He sputters. She’s surprised he thinks she’d do anything for him after what she did to him.

He agrees and starts to laugh.

He’s glad the passion isn’t gone. Gabi huffs out a sigh and goes.

He tells her to think about Parker. She has too much to live for.

Chloe throws the poker and runs off and Kristen thanks him. Stefan says not to.

She’s lucky he didn’t use this on her himself, after what she did to him.

He thinks he’s entitled to revenge.

He thinks if there’s justice, she won’t be allowed near Rachel again.

She asks who the hell he thinks she is.

He kicks her out of his sight. Once she’s gone, Chloe reappears and he calls her badass. She asks if he got Rolf’s programming reversed.

He says they can’t find Rolf and he’s relieved. He was repulsed by Gabi’s actions today.

She’s so blinded by what she wants that she didn’t think of Marlena or what her family’s going through. He can’t be with someone like that.

Stefan asks what she plans to do about Brady now that she knows why he dumped her. She admits Brady asked for a reconciliation but she says she has real feelings for him.

Stefan agrees at first, he had feelings for her because of the programming but those feelings can grow and change.

His feelings are real — and strong. She’s the only one he wants to be with.

Kristen picks Rachel up from school and gets her hot chocolate.

They sit in the square and Rachel asks why she picked her up when she knew Nora Jame’s mom was coming.

She wanted to spend time with Rachel. Rachel says that her daddy called her bad and that’s why she left.

Kristen says it’s Chloe’s fault that they can’t be together. She suggests they leave Salem together.

Rafe and Jada arrive at the DiMera mansion with a warrant for Kristen’s arrest but Stefan says she’s not there.