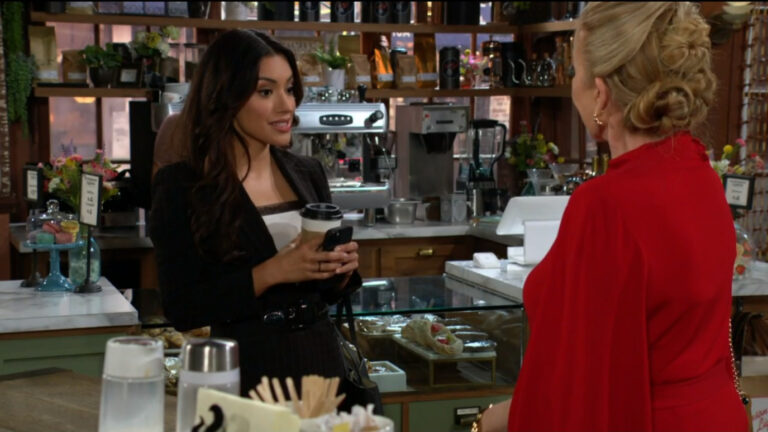 In this episode of CBS’ The Young and the Restless, Ashley turns Tucker down, Nikki tells Phyllis the new dirt on Diane, and Victor wants a favor from Michael.

In the previous episode, Noah asked Audra to stay away from him, Nate suggested an accelerated IPO and Nikki made digs at Tucker and Diane.

At the Abbott manse, Tucker tells Ashley he’s missed her. He has no secret machinations at play.

He tells her about his near-fatal car crash and how looking at death in the face gave him a new perspective.

He regrets wronging her and wants to make it right.

He tells her about joining an Ashram and how it didn’t last. “You always did like your toys,” she says. He regrets letting her slip away.

They remember when she said she’d be with him if he was a different man. She shrugs and scratches her ear — indifferent, and reminds him he was also sleeping around. He knows he was taking her for granted.

She calls him out on creating a speech. He admits he’s thought long and hard about seeing her and what he’d say but calls it all sincere.

She asks if he thinks there’s a future for them and shuts him down right away. It’s not going to happen.

She’s moved on. She thinks he followed Diane Jenkins to town. He swears things with Diane were long over. She doesn’t believe it and asks why he’s really there. He didn’t expect her apathy and gives her tea from the Japanese tea room.

She says, “No, thank you,” and hands it back. He seems down and leaves it with her. He asks to talk with her again after she’s processed. She refuses him. He goes and she dumps the gift in the trash.

As Jack tries to talk to Phyllis about his sister in his office, Nikki calls with new information on Tucker.

Phyllis cuts her chat with Jack short and lies that she has a meeting as she races from the room.

Summer kisses Kyle in the office. He invites her to lunch with his mom but she’s busy.

He takes off and she finds Jack to ask where her mom went. Jack says she ran off to a meeting.

Summer thanks him for making her wedding special. He’s glad to do it. She talks about which photos to print. She loves the one of him Harrison. He loves them all.

“You make a house a home,” he says of them living in the Abbott home. They love it there.

Michael turns up at the ranch for an urgent meeting with Victor. Vic tells him to find out why Tucker McCall is really back in Genoa City. He tells Michael about the IPO and Victoria’s insider information making her ready to react.

Michael doesn’t want to know the source. He calls it possibly flat-out illegal.

Vic wants Michael to guide her but he’s not comfortable. He was the DA!

Victor says that’s the point. Michael can advise her how not to skirt the law. Later, they share drinks and talk about what Tucker might be up to.

At the park, Nikki lets Phyllis know that Audra Charles, Noah’s ex used to work for Tucker’s company. She just showed up in town. Phyllis thinks the coincidences keep adding up.

They agree she’s connected to Tucker but they need proof. Noah just happens to call. He ran into Audra at Crimson Lights.

Phyllis is excited. She smirks while Nikki goes off to question Audra.

At Society, Diane talks at length about the vow renewal party.

Kyle says nothing. She thinks he’s got Tucker on his mind but he is mostly thinking about people linking her to Tucker’s past.

She sniffs. Half the women in town were linked to him. He says Phyllis thinks it’s current and asks her to tell him it’s not true.

She skirts the actual answer and he calls her on it so she does it again.

He once again wants the answer. He values open communication. She says the only connection she has to Tucker is pure loathing. Kyle’s glad.

Audra meets Nikki at Crimson Lights. Nikki heard she and Noah used to be together. Audra says yes and that she was at his club last night. She’s in GC on business and says she’s heard about the Newmans.

Nikki thinks she knows more about them than she does about her.

They talk about her working for Chancellor-Winters and Nikki hopes she will keep the legacy of her dear friend Katherine Chancellor alive.

She calls her old friend a Titan and remembers Noah saying Audra was an artist, yet her work for Chancellor-Winters doesn’t sound like art. She says she helped identify artists and has to get to a meeting.

Nikki’s sure she’ll be meeting other big names and fishes for information about her possibly knowing Tucker McCall.

She says she went to business school for a fallback career and she got tired of scrimping.

Nikki asks if she misses art but she works on it regularly. Nikki thinks it’s wonderful she can satisfy both.

She brings up Wild Beauty and that she’s considering supporting it. She practically purrs as she asks for more information.

Ashley goes into Society and sits with Abby.

They discuss Tucker and how much Abby hates the guy.

Ashley is sure the man has an agenda. Nikki and Phyllis appear. They received her text. Abby’s surprised and doesn’t want to know what they’re sharing if it’s not insults. She goes and the women sit.

Ashley wants to add Tucker to their scheme. Nikki and Red are glad to hear it because they think the two are a package deal. They talk about how Tucker owns Private Image and Wild Beauty, which Red thinks is connected to Diane and to Ashley.

Ashley says they need proof. Phyllis’ instincts are good enough, she thinks. Nikki stops them from arguing before she tells them about her talk with Audra. Nikki thinks they’re connected.

They have to find that missing piece of the puzzle. They wonder if Tucker knew Diane staged her death all along. Ashley’s not sure they’ll have success in amateur sleuthing when Victor’s paid PIs couldn’t come up with anything.

Phyllis is offended. She and Nikki have worked hard on this. Ashley admits she asked Tucker about her and he said there was no connection. Not that the trio believes him. Phyllis suggests Ashley use  Tucker for information.

Diane and Kyle return to the office. Kyle goes to find his wife. Diane goes to Jack to discuss Tucker’s return. Diane’s surprised Ashley has talked to Tucker. She’s not surprised that his sister wants nothing to do with him but Diane still suspects he has another agenda.

She thinks they need to be on alert. They can’t trust the man.

Summer and Kyle head to the park where he shares thoughts on their honeymoon to Aruba which has a private chef, and Pina Coladas.

For the last few days, she wants the nanny and Harrison there. He frowns. She apologizes for jumping the gun and prattles on. He laughs and admits that’s what he was thinking. He’s just surprised they’re sympatico.

In his suite at GCAC, Tucker talks to Audra about Ashley and then she says things are going smoothly for the arrangements with the IPO. “Good,” he says.