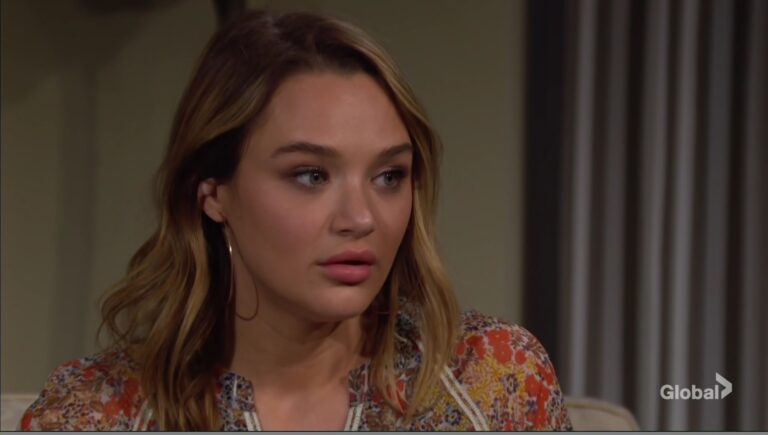 The Canadian Y&R day ahead recap from the Monday, July 26, 2021 episode, which airs in the USA Tuesday, July 27. In the previous episode, Billy learned Ashland’s cancer diagnosis. In this episode, Kyle tells Phyllis off, Jack and Sally reunite, and Summer misses Kyle.

Kyle tells Phyllis he doesn’t like the head games she’s playing with Tara. What’s her angle? Is she looking for a scapegoat that Summer left town? He doesn’t like that she intimated that he was going to be romantic with Tara because he’s not. Phyllis explains that Tara’s looking for another powerful, wealthy family for her and her kid since her husband dumped her. “She’s taking advantage of your love for your son. Can you not see that? And I believe Tara is the person that drove away my daughter.” He asks for her proof. She doesn’t have it yet and when she does, she’ll go to him first. He asks if she’s twisting the story and Phyllis cries. “Summer would never have done this. She was forced. I know that. She didn’t even want me to do this and uncover the truth but I’m doing it. I don’t care what she says. She’s the one that told me to stop.” Kyle doesn’t believe that. Phyllis asks him to think back to the conversations he had with Summer. Maybe he didn’t hear something that she said. “No, no, no,” he says. He spent weeks doing that already. Phyllis tells him Sally and Tara have benefitted since her kid has been gone. “They’re in this together.” Kyle doesn’t see it. Phyllis asks why she didn’t move back to New York. Kyle wanted to be close to his son. He asks her to stop this gossip and vendetta. She will on one condition. “Don’t let yourself be so blindly clouded by love for your son that you don’t see what she’s doing.” He refuses. “Summer left me. It was her choice.”

In Milan, Nikki and Victor visit Summer and learn Leslie Brooks was at her office, looking for a gown. They find that a coincidence. Victor asks if Summer has had second thoughts about moving to Milan. She believes she made the right decision and feels at peace. Her grandparents are glad to hear. Victor goes to take a call and Nikki asks if she’s truly happy there or resigned. Summer has a great job, in an amazing city. It came at a good time. If it was supposed to happen, it wouldn’t be so difficult. Nikki notes that the job fell in her lap. Summer says all she knows is that it feels right. “Being away from Kyle… that does not feel right.” She misses her best friend and it hurts to imagine a future that doesn’t include him. She needs to let go. She’s not happy yet but she hopes to get there. Nikki commiserates.

At Society, Jack and Sally talk about what a great time they had on their date. She knows Kyle wasn’t happy about it. Jack finds his son’s protective streak for him understandable. He just wants his happiness. Sally wants that too. “How about that,” Jack says. Sally asks where they go from here. He feels a connection to her. There’s a certain ease, she’s easy on the eyes, intelligent, witty. He admires that. She nods. He’d like to give them another shot. She grins. “Sounds good to me.” He sings her praises about her talent and she believes it, coming from him. Fighting is exhausting to her and she doesn’t want to do it anymore. Her goal is to win his trust back. He doesn’t want her feeling like she’s on trial. They discuss another date. He’ll call.

Tara claims she’d never try to keep Ashland from Harrison. She’s willing to allow him to break his illness to their kid. She fills him in about what Sharon said. He agrees that everything she’s saying makes sense. They’ll talk with him after he speaks to him alone. They argue about what Harrison will think. Ash thinks he’ll wonder if they’re reuniting and Tara disagrees. Ashland accuses her of only thinking of herself. He needs to find a way to prepare his kid and he wouldn’t have had to do this if she hadn’t have leaked his illness to the press. She calls his accusations wild. He knows better though. She worries that he’ll be vengeful with their son. Ash says he’d never do that. She thinks he resents her. He tells her she makes everything about her. “It’s a gift.” He asks her not to use Harrison to get control of the situation. She counters that he’s used manipulation to an art form. Ash says she knows that his prognosis has changed him. She’s traded one comfortable life for another. He can only hope that someone exposes her for the fraud she truly is. “And then, the whole world will see your true colors.” Jack interrupts and they share what they’re talking about. Ashland wishes he knew who was responsible for the person who put that video online of him losing his sh*t. Jack doesn’t blame him. Ash wants to talk about his illness with his son alone. He stomps out and Tara fills him in on Sharon’s suggestions. Tara paints herself as the victim again and puts on the tears. “I just wanna do what’s best for Harrison.”

Billy visits Victoria at home. Johnny’s feeling better, he says. She’s glad and asks why he talked with Nate about Ashland’s illness. Billy is concerned for her, he admits. He says it took his breath away when he realized that she loves Ashland. “Don’t sound so surprised,” she says. He thinks he met the right person and it’s upsetting to him that they don’t have much time. He knows she’s putting on a brave front but he can tell she’s hurting. He invites her to tell him anything and it’ll stay between them. She tears up and admits he’s right. “It’s awful. And I am in love with him.” She calls him fierce, determined and intelligent. It’s hard to see him struggle. She admits she wonders if they shouldn’t have merged their companies. Billy thinks it must feel good to have him knowing his company is going on without him. Billy asks if there’s treatment. She says yes, but the side effects are terrible. He doesn’t want his final days to be feeling weak and filled with drugs. Billy’s surprised she’s going along with it. She didn’t and finds it reprehensible that Tara’s asking for sole custody. Victoria knows she’s not acting like her usual cautious self. She’s overwhelmed thinking of him dying and she can’t let him know how much it hurts. Billy tells her, ‘I told you so’ in so many words. Billy feels terrible that she has to go through this. He thinks she’s what Ashland needs and that they need each other. Victoria seems touched by his reveal. Ashland walks in and finds that a pretty good endorsement. Billy thinks his situation “sucks” and he’s sorry Ash is going through it. Ash asks if he feels bad enough to keep reports out of the news for his son’s sake. Billy agrees not to report a thing. They both appreciate it and Victoria thanks him for listening. He goes. Ash wonders what Victoria said to Billy that turned him into such a good listener. She admits she told him how she was feeling and she admitted, “I’m in love with you.” She knows this is going quickly but the circumstances aren’t normal. She needs what he brings to her life. “I’ll take what I can get. I love you, Ashland and don’t tell me not to feel that way.” He guesses he needs to find a way to stay alive. “I’ll start treatment, maybe I’ll get lucky and it’ll actually work. I sure as hell hope so.” They both tear up.

At Grand Phoenix, Phyllis stars at Sally, who is sitting across from her. She calls her and pretends she didn’t see her sitting across from her. Sally says she’s got her attention. Phyllis has something to show her. They disconnect their phones. Phyllis shows her the charges on her bill. She is concerned that some charges are incorrect. Summer doesn’t have a mini-bar and says there’s a charge for one. Phyllis says to mark that off and she’ll remove it from her bill. Sally plans on posting a crappy review once she goes through the bogus charges. Phyllis sets down her files and then picks them up, along with Sally’s cell phone, all on the sly. Phyllis texts Tara with Sally’s phone, telling her that Phylis has figured it out. Tara says to herself, “Damnit,” when she gets the text. She’s interrupted by Kyle. She makes light of her talk with Ashland and says they’ll work things out.