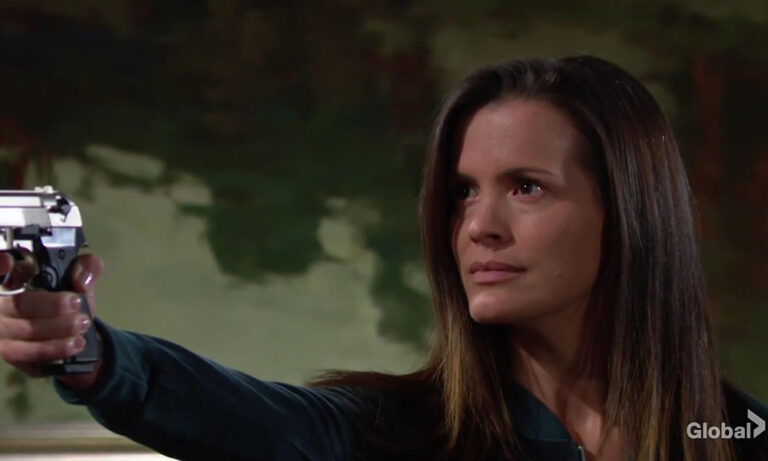 This is the Canadian “day ahead” Y&R episode from the Tuesday, March 2, 2021 episode, which airs in the USA Wednesday, March 3. On today’s day ahead, full episode recap of Young and the Restless, Adam tells Chelsea about his session with the doctor, Jack praises Summer, and Traci listens to Kyle’s woes.

Tracy finds Kyle at the Abbott house daydreaming. He tells Traci he’s glad to have Jack for his dad. They missed out on a lot of time together. Kyle wonders who he would have been if Jack had rejected him. Traci says he’d never do that. She comforts him and he says he thinks everyone should have a dad like him.

At Jabot, Summer finds Kyle’s cell phone and closes herself into his office, and tries to log in using his password. She’s shocked to learn he changed his password. Jack appears. Kyle asked him to find his phone. Summer shows him she has it. Jack calls her work with Dollar Bill Spencer “outstanding.” She’s touched. He asks if she’s still at odds with Sally and Summer wonders why he cares. He tells her he and Sally enjoy each other’s company and that’s all he’ll say on the subject. She hopes it works out for him and goes. Sally texts Jack. There’s something she thinks he’ll like…

Nicholas talks to Faith about being bullied. He’s glad she hasn’t had new messages. She figures they got bored. Nick says they caught the person who posted the photo of Sharon and Adam online. He says it was a female student and the Dean is taking the situation seriously. Faith worries Rey won’t take Sharon back.

Rey arrives home. Sharon’s grateful he’s there. He asks if she’ll agree to counseling. She’s unconvinced that they need it but agrees to it. She’ll schedule the appointment herself but asks to hold off until everything is okay with Faith. When Rey asks how long she thinks it’ll take, Sharon doesn’t know. She wants to find a way to close the gap between them. Rey disagrees with that plan. He isn’t living with that uncertainty. She can take an hour each week to see a counselor with him. Rey thinks she’s afraid. He is too. They need to deal with this stuff or they’ll lose each other. Nick arrives. He brought Faith home but she’s at the stable. Rey goes to work and Nick asks if she’s okay. Sharon’s optimistic. Faith appears and tells her parents that Jordan’s not a mean person. She was helpful but goaded her into bad situations. Sharon and Nick are impressed with her new perspective. She’s been playing over what happened. She’s sorry she pushed them away. They’re not angry. She decided to give her parents the names of the bullies. Nick goes to give the names to the dean and the women discuss Adam kissing Sharon. Faith doesn’t get why she could even look at Adam. Sharon reveals that he saved her life once during a tornado. He also got her psychiatric help when she needed it. She owes him a lot but needs to set firmer boundaries. Faith asks if she and Rey will divorce. Sharon says they’ll go to therapy and they’re in love. Things will get better. Faith smiles. Sharon calls Rey to update him on the Faith situation and says she’ll do therapy with him immediately. She loves him and wants to make it work. Rey feels the same. Alone, Faith gets a text, ”

At home, Chelsea concentrates on moving her hands. She’s able to push herself up from her chair a little and uses positive self-talk to keep going. She’s able to push her chair forward. Once she hears Adam’s voice, she stops. He tells her that he spoke to Dr. Cavett, who suggested that they stay in Genoa City. He knows she’ll have a breakthrough soon and says Victor called to get together. Chelsea thinks to herself that he’s falling for Victor’s same old tricks. Adam wants to spend time with him. Chelsea thinks about Victor and Sharon being his two weaknesses. He goes and she tries to get up. She fantasizes that Adam returns and she shoots him.

Summer arrives at the club and tells Phyllis to keep this to herself, but she thinks Kyle’s hiding something from her. Phyl says to trust her instincts. Summer asks if she can crack his password on his cell. Phyllis says it’s possible but she wouldn’t recommend it. Summer thinks she’s a hypocrite but Phyllis says he’ll find out. It’s a violation of privacy. Summer says Sally knows about his secret and is holding it over his head. Phyllis wonders why Kyle’s worried his secret will get out. Summer says the woman he had an affair with has a well-known and vindictive husband. Phyllis wants to help but won’t do it. “Go to him and demand that he be honest with you.” If it doesn’t work, they don’t have a relationship. She advises to tell him she won’t judge or freak out.

Victor and Adam meet and discuss Dr. Cavet’s suggestion that they stay in town. Victor thinks he needs more to occupy himself. There’s a large media company on the market he’s going to buy. He asks Adam to run the day-to-day operations. He’ll report to Victor. Adam’s glad since he doesn’t want to report to Victoria but he declines. He and Chelsea still plan on leaving town. Vic thinks it’ll take a while for her to get back to her old self. He suggests he could run the company remotely. Adam reconsiders. He’ll give it thought.

Kyle arrives at Jabot looking for his phone. Jack says Summer has it. Jack asks about the New York City trip and before he can answer, Summer pops in with his cell and Kyle takes a call from Tara. She warns that she and Ashland are coming to Genoa City next week on business. She asks him not to mention the past if she sees them. They disconnect and Jack goes. Summer asks him to be honest with her about whatever’s going on. “Okay, I will.” He tells her everything about Tara and Harrison.

Take a look at yesterday’s day ahead Y&R recap when Chelsea was able to tell Chloe what happened between Adam and Sharon, and then join in the conversation with a comment or two and feel free to like and follow Soaps Spoilers on Facebook and Twitter.