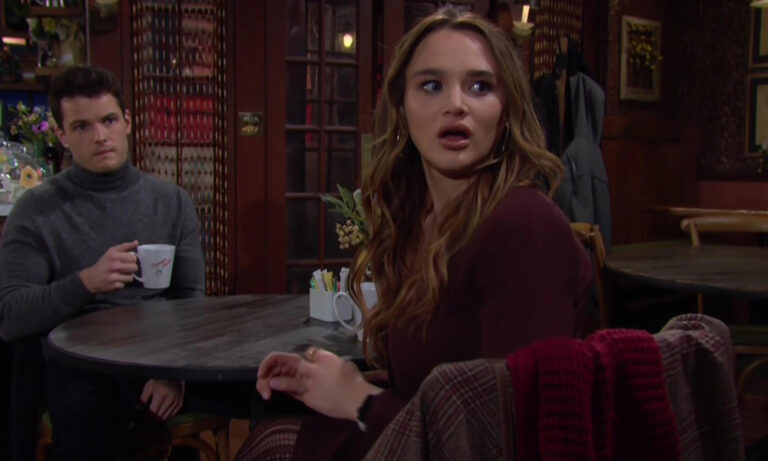 This is the Canadian “day ahead” Y&R episode from the Monday, March 8, 2021 episode, which airs in the USA Tuesday, March 9. On today’s day ahead, full episode recap of Young and the Restless, Lily and Billy can’t wait to find out who the other buyer is for Locke’s company, Sally butters Jack up, and Devon goes to Abby with his women issues.

At Society, Billy and Lily toast to a night off and then they discuss business. There’s a third prospective buyer who is vying for Locke’s company. Billy doesn’t know who it is. They ponder this at length, wondering how to close the deal over them. They make jokes about each other knowing how to balance work and pleasure. Locke calls Billy. He asks if they have a deal. “Really? So soon?” He says. They disconnect and Billy says Locke’s coming to Genoa City. The potential buyer lives here. When Billy wants romance, Lily agrees to give him sex all night long if he talks more about business for now. He gives in a little, they dine, and then they discuss the acquisition once again. They ponder if the buyer could be Devon or Dollar Bill Spencer or Adam Newman. They canoodle over how much they love each other until Billy gets hot and wants to take her home.

From home, Devon starts to text someone to tell them they need to talk. He makes three attempts but can’t follow through. He takes off.

Ashley brings Abby snacks at the Chancellor mansion. Tomorrow’s the big day. Ashley thinks her kid is brave but Abby just feels guilty. Devon arrives. Ashley lets him in and goes to take care of emails upstairs while Devon admits he needs to talk. He avoids discussion and they discuss how they think Katherine would be happy for their surrogacy. Finally, Devon admits he’s into both Elena and Amanda and that he cheated on Amanda with Elena. Nate knows and Devon admits he and Elena have feelings for each other. Abby thinks obviously he needs to make a choice between the two hotties.

Summer arrives home after giving Kyle space. He appreciates all she’s doing, knowing this can’t be easy. She’s surprised to learn he didn’t tell Jack about Tara or Ashland or Harrison. Kyle says he walked in on a date with his dad and Sally. The timing was off. Kyle thinks his father would tell him to fight for what he wants but he wants to know what Summer wants to do about this now that she’s had time to let it sink in and knows all of the possible ramifications. Summer thinks he should get a DNA test but Kyle believes Tara. It doesn’t matter. He’s walking away from it all. Summer supports that and tells him they should go to Crimson Lights to take their minds off of it.

Jack and Sally arrive at Crimson Lights after ice skating. She’s determined to learn and they laugh about her falling on her butt several times. Jack feels honored to teach her. Sally used to be a roller skater and thought it’d be easier. Jack used to skate since he was a kid with his parents and siblings. He taught Billy how and Kyle was quite a hockey player. He says they sent him to a sports-focused boarding school. Sally likes that. She hopes everything is okay with Kyle, knowing how serious he was when he interrupted last night. Jack says it’s got something to do with a trip he was about to make to New York City. Sally knows what it’s about but acts as if she doesn’t and wonders if it’s something coming back to haunt him. They discuss his relationship with Phyllis. “I delivered Summer,” he admits, but it wasn’t meant to be with Phyllis. He wishes he hadn’t cheated on him but that’s in the past, too. Sally calls him forgiving, romantic, and sophisticated. He leans in, enjoying the banter, but when Kyle and Summer appear, he sits back in his seat, uncomfortable. Kyle and Summer sit and stare and bitch about having to see them together until Summer finally admits that Jack looks happy. Later, they are shocked when Jack leans in to kiss Sally. Kyle and Summer are rocked to their core and Kyle’s grossed out. Summer decides she needs to take his mind off of it. She takes him home for sex. Meanwhile, Jack tells Sally that kissing her is everything he hoped for and more.

Devon returns home and texts Elena to get together to talk. She’d love to.

At their suite, Billy wants to do business again but Lily says not to. He wants to see if The Big Fish is coming into town. Lily says fine. She’ll go back to her room to sleep. He drops his phone. It can wait.