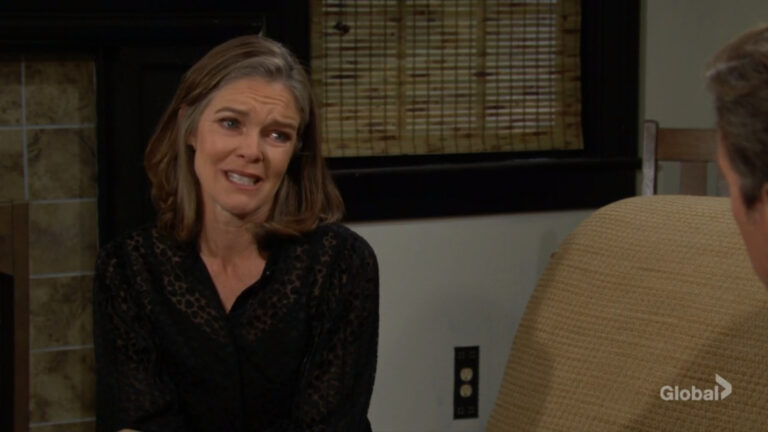 Soaps Spoilers’ full list of spoilers for The Young and the Restless from Monday, March 28 to Friday, April 1.

Michael turns up in Genoa City. He sees Lauren and says, “Hello gorgeous!”

Jack heads back to L.A. to see Allie.

Ashland takes Victoria in an embrace. “This means the world to me. You have no idea,” he says as Billy and Nick watch, in shock. “What the hell?”

Ashley says, “Long lost granddaughter appears out of nowhere when Jack is reeling from the death of his estranged son?” She’s surprised Phyllis is encouraging him to peruse the relationship.  Ashley asks, “What were you thinking?”

Monday’s Y&R day ahead recap: Victoria goes back to Ashland

Nick sneers when he sees his sister with Ashland in a hug.
Victor and Nikki strategize to help Victoria.
Abby notices a change in Chance.
Chance plays Legos with Dominic.
Chance has a meltdown when he plays Lego.
Billy stops Nick from interfering.
Ashland seeks forgiveness.
Victoria tells Ashland she still wants to be with him.
Ashland and Victoria kiss.
Victoria’s family is aghast that she’s taking Ashland back.

Tuesday, March 29 Y&R recap: Michael details what happened to him

Victor receives a surprise visitor.
Michael tells Lauren that he was jailed and he blames Ashland.
Ashland is surprised when Victoria agrees to go away with him to Italy.
Victoria stuns her family when she asks them to just trust her judgment.
Lauren loses patience.
Victoria takes matters into her own hands.
Abby doesn’t realize what’s up with Ashland and makes a double date with him.
Kevin tells Chloe about finding Michael in San Diego.
Michael is grateful to a guard who helped him get out of jail.

Jack seeks out answers from Allie.
Ashley worries about Abby and Chance.
Tessa and Mariah find Noah is helpful in planning their wedding with them.
Noah wakes up alone in bed after a new girl leaves him with a note about how much fun they had.
Sharon keeps a close eye on Noah.
Ashley and Phyllis share a difference of opinion.
Phyllis tries not to have a meltdown at Ashley.
Phyllis tells Ashley that Allie’s a good person.
Allie and Jack have a great meeting and break the ice a little.
Allie gifts “Taylor” with a housewarming gift and introduces her to Jack.
Jack’s shocked to see Taylor is really Diane Jenkins.

Y&R day ahead recap for March 31: Jack explodes at Diane for faking her death

Victoria shares shocking news with Victor and Nikki. She’s going to Tuscany with Ashland.
Nick asks Billy for a favor. Will he talk to Victoria about Ashland?
Lily worries Billy will be on Ashland’s hit list.
Jack’s trip to LA takes an unexpected turn.
Jack is shocked Diane  faked her death and the reason why.
Allie is confused that Jack knows “Taylor.”
Jack fills a confused and angered Allie in on how he knows Taylor as Diane Jenkins.
Allie feels used by Diane.
Jack and Allie bond a little after their shared experience.

Diane tells Jack how she faked her own death with Deacon’s help. When Diane reveals what she wants from Jack, he rails on her and tells her it’s not going to happen.
Jack connects the dots.
Phyllis commiserates with Lauren.
Lauren commiserates in turn, with Phyllis, who knows something is up with Jack.
Allie and Jack meet and connect some more.
Allie reveals that she and Keemo had a good relationship and that she was a mathlete.
There are lots of flashbacks as Jack and Diane reminisce about their life together.