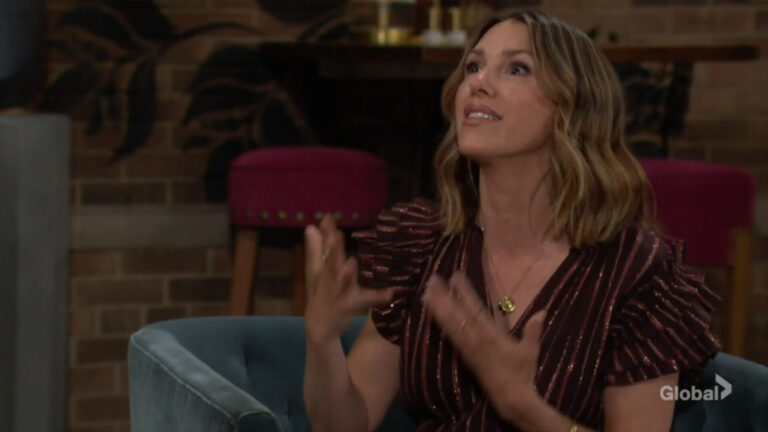 Coming up! Adam tries to help Chelsea, Jack makes an intriguing offer, and Diane plays the sympathy card. Joshua Morrow is not leaving Young and the Restless. This rumor is going around because this week, Nick thinks about making a move. He could go to visit his sister in NYC but the actor is not going anywhere.

Check out the Y&R spoilers from the week of June 20-24. You’ll see Monday June 27th spoilers on this page in addition to this week. Nick tells his dad that he feels guilt. Victoria is going to find out he betrayed her by telling Victor where she was.

He’s nervous about the blowback.

Meanwhile, in New York City, Ashland tells Victoria that her family has pushed and pushed and he thinks they deserve whatever they get from this point on.

Victoria in turn tells her husband, “Each one of them has second-guessed me. This is my statement of a lifetime!”

Take a look at this week’s spoiler video promo for Y&R!

Ready for Victoria’s statement of a lifetime? #YR is new this week on @CBS! Watch the latest episodes on @paramountplus. pic.twitter.com/MxwKytUZN3

Congratulations to Mishael Morgan on her Daytime Emmy win. Here’s her acceptance speech. She thanked God, calling it “epic.” She thanked her mom, dad, sisters, family and husband, and her kids, who make her better and inspire her. She thanks her agent, the academy, and everyone at Sony. Everyone at CBS.

She was in shock and emotional as she tried to remember to thank everyone. She thanked the crew of the show who dedicate their lives to each show, calling them the “unsung heroes.” She thanked the fans who embraced her when she came on the show.

She said she was proud of their generation, regardless of the color of her skin. Little girls all over the world can see they can achieve success and will be celebrated for it.

Jack stands his ground with Phyllis.
Sharon and Nick discuss everything going down at Newman.
Nick starts to wonder if he shouldn’t be at Newman to help the family out.

Tessa’s throat bothers her and she goes to the doctor who gives her shocking news.
Tessa faces an unexpected crisis.

Nick thinks about a change of scenery.
Mariah is very supportive.

Noah gets in Diane’s face.
Jack calls Phyllis out for sabotaging relationships.

Diane’s happy when she and Harrison go to the park.

Chelsea tells Billy she can’t stand his podcast. He used to be so funny.
Lily admits Billy’s podcast is dour.

Adam tells Sally about how his sister likes to get their father’s approval.
Victoria encourages Ashland to buy a whole building.
Victoria secretly messages someone behind Ashland’s back.

Chelsea considers a new opportunity. She’s designing for Marchetti.
Chloe is upset that Chelsea has a new job.

Nate asks Imani for a favor. He wants her to get Elena out of her contract.
Imani isn’t sure why she should do a favor for Nate that concerns Elena.

Elena and Imani have a tense moment as Imani rubs in her close working relationship with Nate.

Diane, Jack, Summer and Kyle go for drinks to celebrate the job and Phyllis comes across them.
Phyllis and Amanda discuss Naya’s stroke.

Sally and Adam make out in his office.
Adam asks Sally for help.
Sally suggests Chloe work for Newman Enterprises.

Nick’s loyalty is tested.
Chelsea and Chloe argue and Chloe tells Chelsea she can’t work with her anymore.

Victoria steals all of Ashland’s money while he’s out wheeling and dealing.
Victoria is caught in a compromising position.
Ashland returns to the suite as Victoria’s bags are packed.

Tempers flare between Chelsea and Chloe.
Sally has an offer.

Ashland makes a shocking discovery.
Nikki is grateful her daughter is coming home.