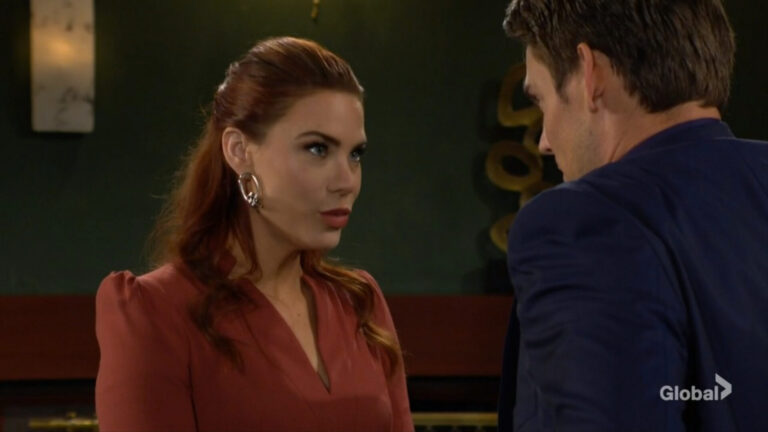 The spoilers below all have revised airdates for Young and Restless since an episodes was pre-empted from last week. You’ll see Monday June 27th spoilers on this page in addition to this week.

Coming up this week! Phyllis (Michelle Stafford) is back from visiting her son Danny, and she’s got a new mindset. Or does she?

Take a look at this week’s Y&R spoiler video promo where Summer says that her mother and Diane would kill each other if given a chance. Phyllis tells her BFF Michael, “I will never forgive what she did to me and some people I love.”

Kyle and Summer have concerns about what Phyllis plotting against Kyle’s mom. Phyllis tells someone on a call, “Sometimes people need to learn their lessons!”

Game meet game. The excitement is on.

Phyllis is ready to teach Diane a lesson!💥 #YR is new this week on @CBS. Watch the latest episodes on @paramountplus. pic.twitter.com/Nfghn476Cn

Young and Restless is happy that the Creative Arts Daytime Emmy Award for Outstanding Original Song and Outstanding Casting has gone to their show. SoapsSpoilers has the touching song that played tribute to Neil Winters (Kristoff St. John).

The #DaytimeEmmys Award for Outstanding Original Song goes to Grateful For It All – @YandR_CBS (@cbs). pic.twitter.com/d8q6OFrSkW

Jill learns from Billy what Ashland did and that Victoria’s run off with him.
Billy’s feeling restless.

Tuesday’s Y&R recap: Phyllis returns to Genoa City in disguise and eavesdrops on Jack and Diane.

Kyle takes on a challenge. He’ll be CEO of Marchetti.
Summer’s happy with Kyle.

Lauren hears the idea about having Marchetti rolled into Jabot.
Summer thinks Chelsea could sketch for both companies.

Jack, who said he would never talk to Diane about Phyllis, spills that they’re never getting back together.

Wednesday’s Y&R recap: Adam tells Victor he knows why he gave him the CEO position

Victor rallies the troops to help Victoria.
Michael is asked to do some work for Victor, knowing how much he hates Ashland.

Chelsea revisits her past.
Lily makes an interesting discovery.

Nikki goes to Billy for answers.
Sally gets a new “corporate outfit.”

Michael has advice for Victor.
Adam’s on to Victor.

Amanda learns disturbing news. Her mother is in the hospital and very ill.
Amanda and Imani talk about visiting their mama.

Imani learns Elena’s going on a trip without Nate and wants to use it to her advantage.
Elena annoys Nate when she goes above his head to ask Devon if he can get time off.

Elena’s headed to Miami for a conference.

Michael points Diane in the right direction.
Michael asked for details from Diane.

Adam confronted his father about hiring him as CEO to get back at Victoria.
Phyllis extends an olive branch.

Jack i s disappointed that Kyle will leave Jabot to head up Marchetti.
Diane seizes an opportunity with Jack.

Sally shows Adam her new uber conservative look.
Adam and Sally have sex in his office.

Nick hears from his sister who tells him she’s in NYC.
Victor already knows where his daughter is, but Nick tells him anyway.

Phyllis is upset that Summer wants her to call a truce with Diane.
Phyllis is petty when she does call the truce.

Phyllis asks Jack to meet her.