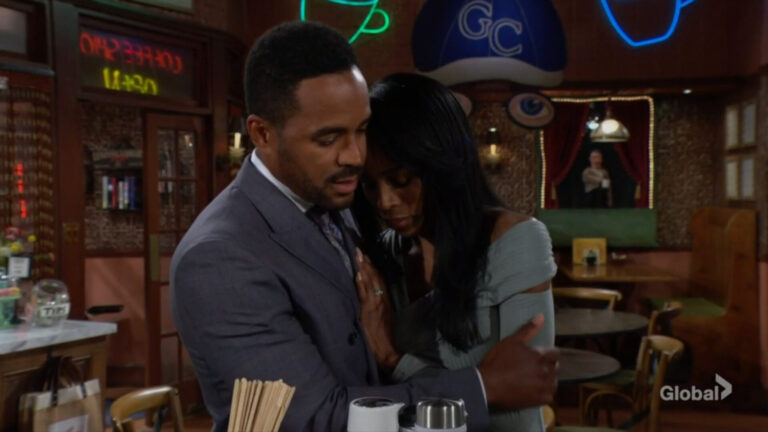 This week has Victor backing Ashland right into a corner, Nikki giving Summer a warning, Adam visiting his dark side, and Nikki retaliating against Diane.

Check out the Y&R spoilers for the week of July 4-8.

Victoria makes a power move by telling Billy to do a podcast on Ashland’s lies.

Ashland receives a link to Billy’s podcast from Stannis.

Diane is offended by Locke’s request that she turn her head while he visits with his son against the restraining order.

Diane’s again offended when Michael asks her to do what Ashland wanted, only to ensure Locke is caught and put in jail.

Tuesday’s Y&R recap: Phyllis has a warning for Kyle

Nikki gives Summer a warning not to trust Diane.

Kyle and Phyllis bicker over Diane being a snake or not.

Nikki asks to join forces with Phyllis against Diane.

Phyllis develops a strategy against Diane.

Noah’s sad because he wants to quit New Hope and he isn’t sure he can.

Allie is upset that both Diane and Phyllis want intel on Jack — from her. She tells Traci, who is the voice of reason.

Victor considers a reboot at Newman.

Nick warns Victoria that Ashland could return and suggests she get security on it.

Adam visits Ashland in his suite and agrees to work with Locke against his family.

Victoria wants Sally out at Newman but Victor wants to use her to lure Adam back.

Nick tells Adam that Vic wants Sally out and Adam asks him to wait. He wants her there.

Nick tells Adam that if he returns as CEO, Sally can stay on as COO.

Victor and Victoria have a difference of opinion about Sally.

Ashland shocks Victoria and Victor by showing up at Newman.

Victor goes to Sally for a chat.

Imani gets grief from Amanda for setting up a meeting between Nate and her to discuss Elena’s contract.

Amanda thinks her sister is crossing a line with Nate.

In a meeting, Billy suggests that Chelsea and him do a podcast together since they’ve good chemistry, causing Lily to be skeptical.

Nate falls into a trap.

Chelsea takes on a new venture.

Victor celebrates the defeat of Ashland.

Noah can’t decide on what to do about work.

Allie and Noah have their first date.

Adam and Sally have sex and then he leaves her in bed alone.

Adam makes a sacrifice in order to help Sally.

Sharon worries to Traci about her son.

Locke sobs over Victoria and remembers getting that ring from her before he tosses his hotel suite in anger.

Michael and Nikki share a difference of opinion about Diane.

Lily watches an exchange between Nate and Imani about her mother and Nate comforting her.

Lily is suspicious of Imani.

Nate hugs Imani as she makes a decision about what to do about her mama Naya.

Chelsea and Billy start their first podcast about their pasts.

Diane proves herself to Kyle.

Summer and Kyle learn Chelsea isn’t going to be working for them.

Everyone watches as Ashland is caught red handed.