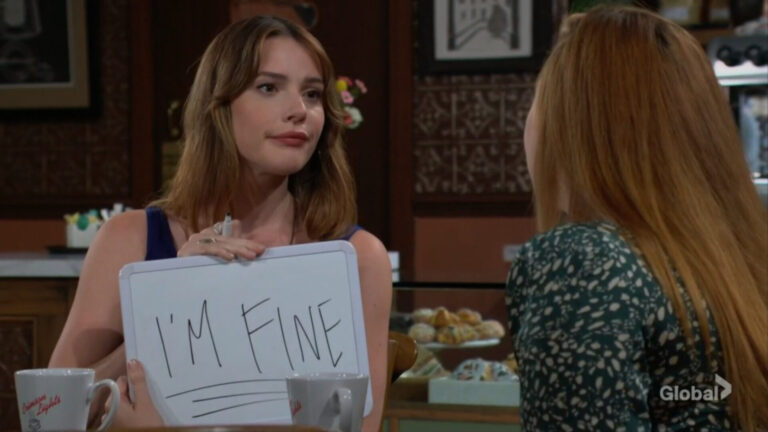 Jack thinks Adam has so many opportunities to prove himself to the world. He says, “Come work with me at Jabot!”

We have a few new faces coming to Y&R. Take a look at the Y&R summer comings and goings to read more about one investigative reporter and a familiar soap vet who has joined the CBS soap.

Kyle and Summer discuss pros and cons of hiring Phyllis.

Phyllis gets the job at Marchetti.

Diane blows a gasket hearing that she has to work with Phyllis.

Chance confronts half the family about Locke’s body being moved.

Sharon and Nick commiserate over their past.

Billy doesn’t like Jack asking Adam to work at Jabot and tells him so.

Nikki Reacts to Learning About Victor’s Cover Up.

Nikki learns that Chance is suspicious.

Nikki tells Abby that she thinks Chance should back off Ashland’s case, which shocks Abby.

Jack thanks Diane for the thoughtful gift.

Devon tells Elena he thinks he made a mistake in hiring Nate.

Imani has encouraging words for Nate when he dives into his work issues with Devon.

Phyllis plays her cards close to the vest.

Phyllis goes to Nikki about their plan.

Victor’s pleased with how Sally has chosen not to post anything about the Locke story.

Adam talks to Abby about Locke.

Victoria talks with Chance about Locke’s case. She hope he isn’t going to arrest Nick.

Nick worries about what Chance will do.

Nick suggests he and Victoria tell their father about their talk with Chance.

Victor orders his family to keep a united front.

Adam goes to Sally on a fact finding mission.

Sally wants something from Adam that he’s not willing to give.

Chloe interrupts a moment between Adam and Sally.

Chelsea wants to see Johnny and Connor get to know each other as brothers.

Kyle and Summer ask Tessa to be the face of their company.

Tessa’s not sure she wants this job.

Nate doesn’t see what Elena sees in Imani so Elena tells him that she’s stroking his ego.

Sally texts Adam about their break up again.