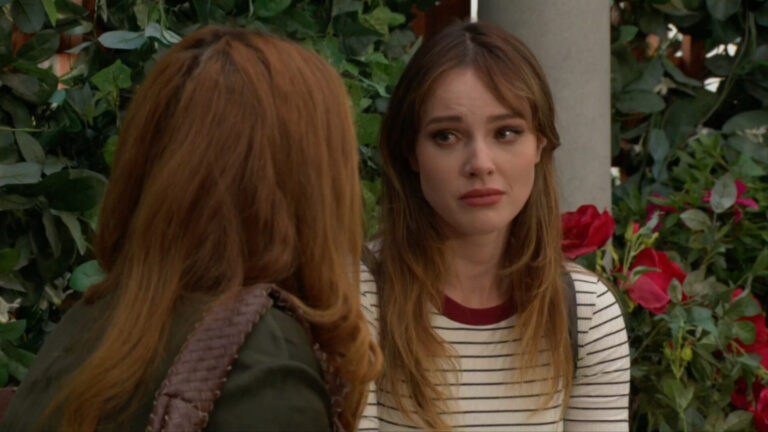 Ashland attacks Victoria, and she strikes back while Nick gets into the mix. Meanwhile, Kyle delivers some bad news, Nick gives Sally unsolicited advice, and Nate and Devon struggle working together. From Friday’s episode, “An accident? Is anyone hurt?” Chance asks when he gets a call.

Meanwhile, Summer asks Phyllis, “How much of this wanting to work at Marchetti has to do with Diane being there?” Victoria’s phone rings. “That’s my security detail. If I don’t answer it, they are going to be here in a hurry,” Victoria warns Ashland.

“Well then! We are going to have to make this quick!” Ashland decides.

Diane asks Jack for advice while they drink.

Nikki and Phyllis scheme and come up with an idea on what to do to get rid of Diane.

Phyllis decides she’ll try to go work for Marchetti and get Diane to sabotage her job or at least make it look like she is.

Ashland and Locke have it out. Their fight leads to tragedy and when Nick intervenes, Locke dies.

Vic checks on his daughter.

Adam kisses Sally but then denies wanting to be with her.

Chance turns up and Vic and Nick walk him through what happened with Ashland’s death.

Victor turns up at Vicky’s for support.

Noah, Allie, Kyle and Summer hang out at Dive Bar.

Victor covers his tracks and protects Victoria at all costs.

Victoria explains to Nikki what happened with Ashland.

Sally breaks into Adam’s room at the hotel.

Sally tells Adam all about her history with her parents running off on her.

Chance finds a car in a ditch.

Adam decides to go to Vegas.

Thursday’s Y&R recap: Nick’s suspicious of Victor’s story about what happened to Locke.

Summer questions Phyllis’s motives when her mom agrees to make a chance and come work for Marchetti. Of course, Phyllis is doing it so she can take Diane down.

Victor and Michael talk about how it could have gone down after Locke left Victoria’s place.

Chance questions Victor, and says there are holes in his story.

Chloe convinces Sally not to quit.

Nikki and Sharon both think it’s like JT’s death where they thought he was dead but wasn’t. But this time, Locke was found.

Diane helps Kyle tell his son that his dad is dead.

Kyle reveals to Harrison that Didi is his grandma while Jack cringes.

Sharon gets together a care package for Tessa.

Mariah keeps a secret from Tessa. She too is worried about the surgery.

Adam decides to go to Vegas and then changes plans.