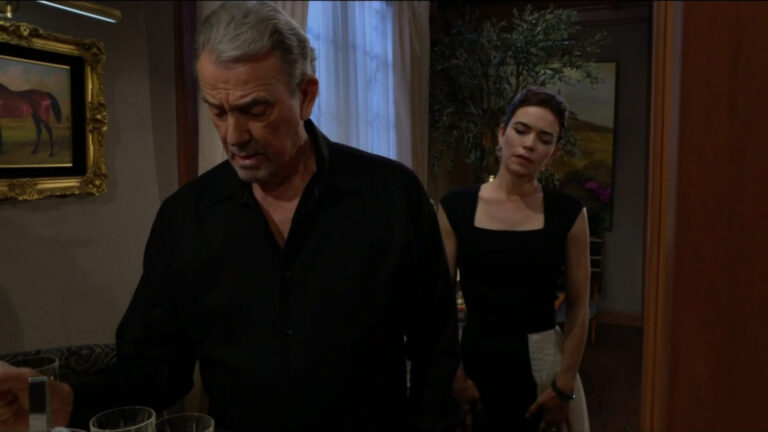 Read the Y&R day ahead daily recaps on SoapsSpoilers — they go live each day by 4:15 PM EST.

Y&R spoilers two weeks ahead! Read the Y&R spoilers from September 12-16 where Nick and Sally have sex, twice, and Nikki talks about going to L.A., while Nate has plans to take over at Chancellor-Winters.

Then take a peek at the Y&R September 19-23 spoilers below and be sure to check out Y&R spoilers September 26-30.

Coming up this week!

According to Deadline, The Young and the Restless is “debuting a new logo in honor of the milestone.”

They’re celebrating five decades and the show will be bringing in guest star appearances and a special crossover episode that’s been planned with Bold and Beautiful that airs September 26, which incidentally marks the 36th season of the CBS soap. B&B’s 9000th episode is coming up on April 14, 2023.

Take a look at the new logo.

Y&R comings and goings have Nikki crossing over to Bold and Beautiful to see Deacon Sharpe.

Adam asks Sally point blank, “Are you sleeping with my brother?”

Deacon Sharpe (Sean Kanan) receives a mysterious text message asking him to meet someone at a hotel in Beverly Hills.

Deacon tells Nikki he’s thought a lot about her over the years.

She purses her lips and says, “Really.”

Deacon tells her, “One more thing. Nick? You look good.”

After Sally and Nick hook up, Adam’s outside her door. She thinks it’s room service and opens the door. Adam takes a look at his brother and ex-girlfriend.

Sally and Nick lie to Adam that they were having a business meeting but he doesn’t buy it.

Once Nick is out of the way, Adam asks point blank if she slept with his brother.

Sally tells Adam that they’re over and he’s out of line to question her.

Adam tries to tell Sally he wants to be with her but she’s done with him.

Jack tells Kyle to fire both mothers if one gets out of line.

Diane and Phyllis realize they must be on their best behavior.

Phyllis falls into a trap.

Kyle gets down on one knee and asks Summer to remarry him, much to her delight.

Chloe doesn’t seem to like hearing how much Nick thinks she’s great.

Nate and Imani get closer.

Diane and Phyllis are upset that they’ll both be fired if there are any shenanigans going on.

Phyllis pushes Diane’s buttons and causes the woman to crack.

Nikki meets Deacon and gets some interesting information.

Nate gets his job back.

Phyllis and Diane are forced to play nice.

Diane blows up and Jack catches her and a big meeting is had.

Kyle and Summer make a shocking discovery – their moms can’t get along.

Both women are fired.

Phyllis tries to come up with ways to get to Diane.

Noah shows off his new club to Kyle and Summer as he has a party in their honor.

Friday’s Y&R recap: Nate leaves Elena when she refuses to get on board with espionage

Victoria fills her father in on Nate’s espionage. Victor’s concerned about it but she convinces him to go for it.

Victoria agrees to tell Johnny who his bio mom is.

Diane and Phyllis get their jobs back.