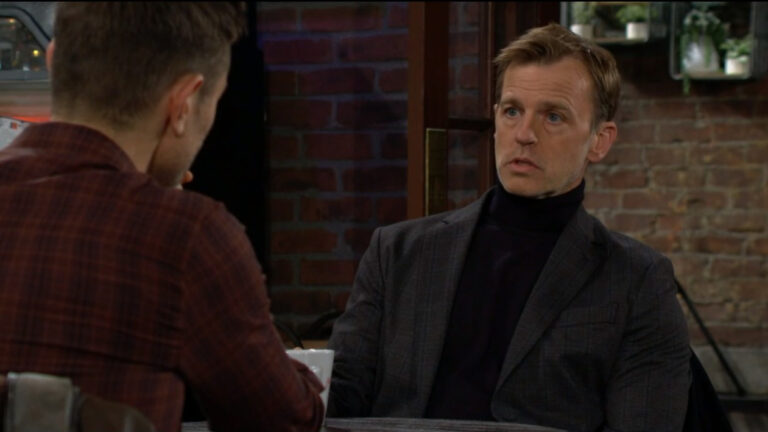 In this episode of CBS’ The Young and the Restless, Sally tells Nick her home is with him, Kyle and Summer have a hard time accepting Jack is with Diane, and Phyllis pitches the game to Nate and Audra. In the previous episode, Lauren celebrated her Lifetime Achievement Award by telling stories of her transformation from mean girl to powerful businesswoman.

Nate and Audra arrive in his office, congratulating themselves on their latest work. He asks her to sit in on his pitch from Daniel.

Phyllis arrives to deliver the pitch. Nate thought he would get it from her son directly.

She explains her son is the creative and she deals with the business side. She’s just testing the waters to see if they might be interested.

Taking off her coat, she tells them her son’s plan could change gaming and be incredibly lucrative and emotionally productive.

Nate’s impressed by her enthusiasm and flare for puns.

Phyllis wanted to see if they were interested in getting in. Nate needs to talk to Daniel before they can make any choices.

Phyllis offers to set up a meeting and takes off.

Nate likes what he heard but notices Audra looks reticent. She tells him that there is already a deal at Chancellor-Winters.

This only makes sense if things are off there or they are trying to inflate the price.

Nate doesn’t want to be used in a chess match. Audra is sure they can get to the bottom of it.

As Lily is about to leave Society, she bumps into Billy. They share a little nostalgia.

He brings up Devon. She’d love to talk shop but doesn’t think she should.

Lily asks him what his next life move will be. He doesn’t know and asks her to grab coffee.

She’d really love to but has a crazy day ahead. She assures him nothing she’s dealing with is because of him.

He’s sure she will figure everything out.

Tucker approaches Daniel at Crimson Lights and is greeted by some sarcasm. McCall says he’s heard about his gaming venture and it sounds intriguing.

Daniel says it’s in the early stages and he needs to be protective of his intellectual property.

Tucker offers to buy him a coffee and make a pitch for why he should be his new backer.

Daniel needs someone with deep pockets who will allow him creative freedom. He prompts Tucker to dazzle him.

McCall says Newman and Chancellor-Winters would be a bad fit if he wants to retain his autonomy.

He thinks it’s terrific that Daniel wants his game to be life-affirming and change people’s lives. He’s done some research on him and asks about his daughter and wife living in Portugal.

Tucker thinks you need to know the whole person and what motivates them. He talks about being alienated from his family.

He can tell the venture isn’t about money but about something meaningful for his family. Tucker suggests they could achieve that together.

Lily bursts in and declares that he’s already under contract with her.

Tucker knows but he also knows her company has problems and snags. She reminds him he’s responsible for those snags and tells Daniel not to trust Tucker.

Lily tells Daniel it would be a huge mistake to break their contract.

He doesn’t want to back out, he’s just nervous and wants to move forward. He didn’t seek out Tucker, that was his mother’s doing.

She repeats that McCall is a snake. Lily knows he wants to prove himself to his family and she wants to help, but she can’t do anything with the IPO in a mess.

Lily asks him to give her a week to put things in motion. If she can’t do it, she will let him out of his contract.

Nate and Audra show up, telling Daniel and their meeting with his mom. Lily is miffed and so is Daniel.

He strides off to find his mom and Audra tells Nate she knew something was off.

As Audra and Nate chat, Billy comes in, spots them together and lays into him for betraying his family before stalking off.

At the Phoenix, Tucker bumps into Phyllis and tells her he just had a conversation with her son. She accuses him of going behind he back.

He points out she went behind Daniel’s back by going to Newman.

As he gets on the elevator, he reminds her it’s Daniel’s project and she’s just along for the ride.

When Phyllis gets to her room, her son shows up. He knows what she did and needs to stay out of this.

They aren’t partners. She works for him and he’s questioning why he hired her.

In LA, Sally complains to Chloe on the phone about Jill cancelling their meeting. She decides to stick around town for awhile to see how things go.

Once she gets off the line, she flashes back to telling Nick she’s pregnant.

Sighing, she sits down and almost sends a text when Nick calls to say he’s been thinking about her.

After joking about how he’s old school enough to use a phone to make calls, he gives her a little pep talk about her pitch meeting. They’ve both been distracted.

She’s sorry for dropping huge news on him and then jetting off.

She confirms she’s been eating healthy and taking care of herself. Sally adds that if her deal with Jill goes through, she might have to move back to LA.

Nick would support that and says they could make it work.

Sally says she belongs in Genoa City with him. That feels like home.

He tells her that her deal with Jill is a slam drunk and starts cheering.

She thanks him for his support and says she’ll be home soon. As soon as she hangs up, she thinks of having sex with Adam and sighs.

Diane sips coffee at the Abbott estate and thinks about lounging in bed with Jack. He shows up and asks why she’s smiling.

Kyle and Summer come down the stairs and are startled to hear that she spent the night.

After Jack assures them Stark is still gone, he announces that his relationship with Diane has taken a romantic turn.

Summer crosses her arms and her mouth hangs open.

The kids sit down and Diane asks how they feel. Kyle didn’t think this would actually happen.

His mom claims it took them by surprise too. She didn’t expect Jack to forgive her and appreciate how much she has changed.

Jack doesn’t want Diane to feel like she needs to sneak around. She’s family.

Kyle doesn’t know how to feel and he’s not sure he can embrace that. They seem happy and he’s all for that.

Once they exit, Diane doubts her son was pleased at all. He may be weary of her motives.

Jack wishes his son could know that he doesn’t believe she can hurt him. Diane can’t stand the idea of losing him again. That’s not a risk she will take.

Jack and Diane go to bed. After sex, he assures her their son will come around. He hates to see her worry like this and promises to be by her side.

Kyle and Summer go to Society. He admits he’s thrown by his parents reuniting.

She thinks her mom was right all along. He can’t root for this reunion given their past.

Maybe this was inevitable, but it was too fast.

Billy interrupts and asks about Stark’s arrest. They recap what they know.

The whole thing sounds off to Billy. He wanders off.

Summer hopes all this family plotting is over and also hopes that he turned down Victor’s request he help sabotage Adam at Jabot.

Kyle claims he’s in the driver’s seat and will only do it if it’s certain. His wife thinks his main motivation is his hatred of Adam.

Colluding with her grandpa is not going to end well. She wants an end to all drama.

Victor sends him a text, asking to discuss the next steps. Kyle lies to his wife about this.