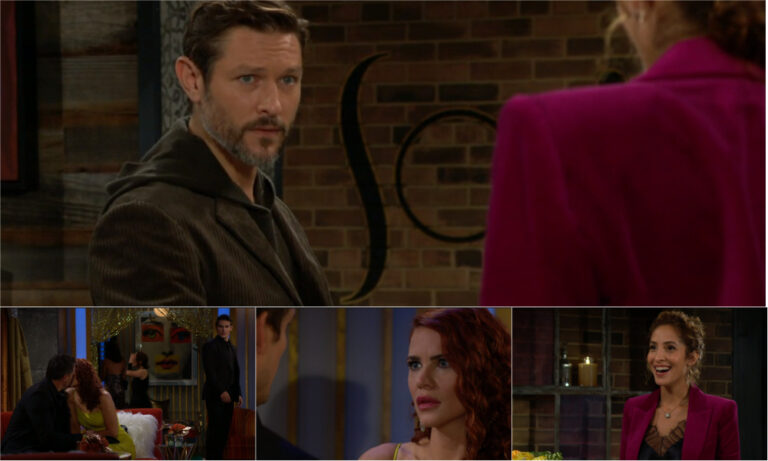 In this episode of CBS’ The Young and the Restless, Devon, Lily, Noah and Adam are glum, Sharon is saddened by her son’s news, and Lily doesn’t like how Billy’s behaving.

In the previous episode, Diane admits to Jack she turned Jeremy in and Abby told her mom she cheated on Chance, while Tucker insisted to Phyllis he’s only back for Ashley.

Sally and Nick dress for dinner.

Nick says they have a lot to celebrate.

He helps her with her coat and they kiss.

At Crimson Lights, Lily and Billy find Sharon and ask how Chelsea’s doing.

When Billy says that Lily knows, Lily calls Sharon an angel. Sharon tries to do the right thing.

She says Chelsea, Connor and Adam have been up there for a while.

Adam appears and Billy questions him.

Adam goes and Billy thinks he should go up there. Sharon pooh-poohs that idea.

Maybe he should call, he thinks, but Lily and Sharon say to let it go.

Sharon vows to call if she hears anything. They leave as Noah turns up.

She asks him how it felt for him when she was spiraling with her bipolar disorder.

He seems caught off guard. It was hard for him but likely harder for Faith.

He was able to research and he and Dad did their best to cover her during the manic times.

She feared they’d inherit her disease but Noah thinks they’ll be fine.

Sharon calls it a parent thing.

One day he’ll get it when he has his own kids.

Noah looks even more glum than usual and when his mama questions him, he says he almost was.

He tears up as he talks about Audra’s miscarriage.

It feels like a big loss. Sharon cries with him.

He can’t believe he didn’t see it. Sharon calls him kind and loving but he says he was anything but.

It’s no wonder she didn’t tell him she was pregnant.

From his new office at Newman Media, Nate does some work when Elena appears with a gift.

A photo of them to put up on his desk.

She wants to go for dinner but he has to work late.

He says to go to Society. He’ll be there soon.

They kiss and she calls the gift for good luck.

She supports him. She goes and he slides into Victoria’s office.

He’s grateful for this opportunity but isn’t sure why he’s taking her place.

Vic says she was only there because Adam hired his then-girlfriend.

Vicky doesn’t think it’s a bad thing to like those you work with. Nate gets it.

They talk about work and a new structure, and culture and focus on content.

He doesn’t want clickbait a part of their routine. She thinks it’ll take manpower.

She’s glad Noah’s not there to watch over them.

They don’t have to keep things PG.

She kisses him just as Adam appears.

He sends over some wine and they can see he’s in the mood to cause another scene.

Adam lifts a glass to them. They wonder, ‘Should I stay or should I go?’

They decide to stay and drink his wine, while he stalks them with his eyes.

They get up to go and Adam stops them.

He wants to talk to Sally alone.

She gives him two minutes.

Devon’s deep in thought at the bar and when she approaches and asks if he wants to dine with her and Nate, he asks why he’d want to dine with a traitor.

He asks if she’s taken him back.

She says he’s been remorseful.

Devon says he only came clean to try to get her back.

She thinks he’s learned from it.

“Is that why he told us who he’s working for?”

Even though they now know. Elena thinks it’s all over with.

They can’t agree so agree to disagree and she asks after Amanda.

He says she’s in Virginia. He doesn’t get into specifics and Billy and Lily arrive.

Billy asks if they should all get a table.

Devon has to pass since Elena’s meeting Nate.

Billy and Lily agree, but Lily wants to catch up with her later.

Elena goes to get her drink while Lily and Billy get a table.

Lily’s jumpy and frustrated. She asks why he didn’t tell her about Chelsea in the beginning.

She worries he doesn’t trust her.

He felt bad about keeping it from her but it didn’t feel like his story to tell. He says he’s improvising.

He says Chelsea reached out to him and he wants to see how she’s doing. Lily’s pissed.

Billy says he’ll be back before their dinner arrives.

He’ll tell her he’s going to pull away.

Elena watches them and texts Nate to see what is keeping him.

Nate texts her and tells her the meeting is going long, this after he’s been chit-chatting with Vicky, asking if she’s always wanted to work for Newman.

Later, Lily goes to her brother and notices her mood.

Does she wanna talk? She refuses so he hugs her goodbye.

She goes back to her table and Elena goes to Lily. She gives up.

She’s headed home. They agree to catch up later.

Back in Victoria’s office, she and Nate are part of a mutual admiration club.

They drink and she reminds him he has dinner with Elena.

He says this is important and they’ve momentum.

Let’s not stop. She grins wildly.

Back at the club, Adam tells Sally that seeing her with his brother is eating away at him.

Back at Society, Lily looks upset.

She looks up and sees someone who catches her eye.

Daniel Romalotti smiles at her.