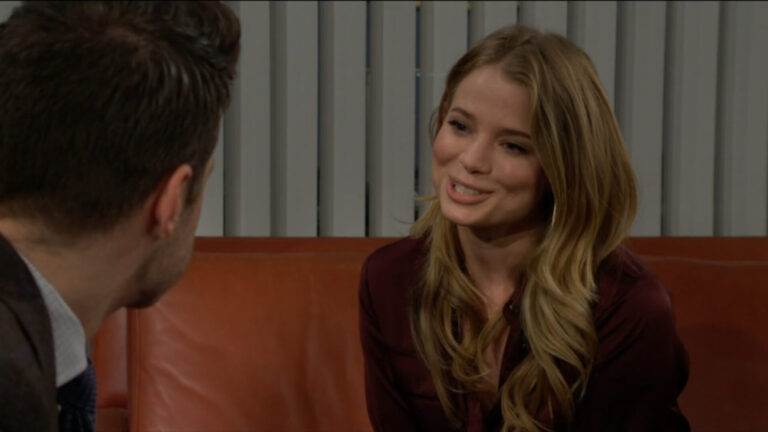 In this episode of CBS’ The Young and the Restless, Victoria worries about Nate’s plan, Diane gives Phyllis a peace offering, and Billy worries to Lily that he’s made a mistake. In the previous episode, Johnny ran away after learning Chelsea is his birth mother, and Billy confronted Chelsea about wanting more than they agreed to.

Allie wakes up in Noah’s arms. He tells her how beautiful she is first thing in the morning. She needs to get to the lab.

Before she can go, they talk about how fantastic last night at his club was. She thinks it was a meaningful way for his to debut his club and she was blown away.

Noah says he’s happy she was there. She means a lot to him.

After another kiss, she rushes off.

Downstairs, Summer and Kyle are amazed they slept in for so long. Allie and Noah join them and they talk about how great everything is.

Diane shows up to Jabot with a basket of pastry. Phyllis starts taunting her. Jack pops up as Diane pushes the armload of pastries into Phyllis’ arms as a peace offering.

She claims it’s a sign of her desire to win back trust. Phyllis accuses her of lacking subtlety and timing this gesture for Jack’s sake.

Diane says they can’t take their jobs for granted. They have the chance to excel.

Phyllis wonders why she was so upset in the first place and if it had something to do with Nikki going to LA.

She asks Diane why she slipped out of the party so early.

Diane insists she was just tired. Phyllis sneers, and her enemy asks her what she can do to help bury the hatchet.

After checking a text from Nikki (blooper – the show called her Diane!) that advises her to keep Jenkins distracted, Red makes it clear there’s nothing she can do to fix things.

Jack urges Phyllis to give a little. She says the basket is tacky, but their constant fighting almost cost her her job and she’s so tired of it.

It seems to Diane that she enjoys it. Phyllis claims she can’t carry on with this exhausting burden and claims she’s willing to do something if her daughter is willing to move on.

Kyle and Summer arrive as Phyllis tells Diane she will meet her halfway and hugs her, suggesting they find a way to make this work.

The kids start to worry. Summer leads her mom into the office.

Phyllis says she was doing her best to be civil. Summer gives her a hug and thanks her for really trying.

Her mom says yesterday was a wake-up call. Choking up, she says she can’t keep doing it.

She may not trust Diane, but she can’t harbor all this hatred. If she’s right about Diane, she won’t have to do anything to make her secrets come out.

Allie and Noah meet at Crimson Lights for coffee. He tells her none of his relationships have been this easy.

Noah says they are comfortable and that’s special. She feels the same way. He says he’s been waiting for her. They kiss and she has to get back to work.

Allie promises to see him later.

Billy arrives in Lily’s office and apologizes for being delayed. Things in the park took longer than he imagined.

She recaps the meeting he missed for him, and notes Devon thinks his heart isn’t in it.
From the look on Billy’s face, Lily is concerned about what happened.

They sit down and he explains how hurt Johnny was. That doesn’t surprise her and she’s sure this situation had more to do with adults in his life than him.

Billy feels like he may have made a mistake and allowing Chelsea into this was a mistake. He worries she may be trying to figure out a way to be his mom and that’s completely inappropriate.

Victoria warned him about this and he should have listened to her. He just felt bad for Chelsea and should have thought about the pain this would cause his son.

Lily knows how hard this. She was hurt and angry when she learned Malcolm was her biological father but Neil was always her dad.

Billy says his priority is protecting Johnny at all costs.

Chelsea shows up to thank him for going to bat for her with Victoria. He admits he’s second-guessing his decision to tell Johnny about her.

She tries to be reassuring and claims she won’t try to force anything. But she wants him to give Johnny a blanket she bought for him while was pregnant for him.

Chelsea insists she only wants to be another person in his life who cares about him.

Lily asks to see the blanket. Billy tells Chelsea this is inappropriate. Johnny needs to make this choice on his own. This situation is not something he asked to be part of and she is overstepping.

If Johnny decides to reach out, that’s his choice, but she needs to back off until that happens. Chelsea is in shock. Lily assures her she’ll find her way through.

After Chelsea is gone, Lily tells Billy he is handling this way. They need to find a way to forge ahead in a positive direction. He’s being the emotional rock of the group and she knows how exhausting that is. If he needs a break, that’s okay.

Nate joins Victoria in her office. He says their strategy is working.

He’s on the inside and everything is going smoothly.

All he has to do is act like he has no opinion.

Chancellor-Winters is moving ahead with there public offering, and they met with Audra, an IPO advisor. Victoria has never heard of her and tells him to keep his eyes open.

He promises their plans won’t be derailed. She asks if he’s sure this is the right move for him.

Victoria makes it clear she doesn’t doubt him, but she has to make sure they handle things right to avoid any legal complications.

Nate suspects there’s more. She admits she’s worried that he’s risking the wrath of his family.

He thinks he’s just proving himself so they can see his vision. That’s not betrayal, according to him.

Victoria bumps into Audra at Crimson Lights. She introduces herself and commends Victoria on how she is handling Newman.

Audra explains she’ll be trying to get to know all the players in town.

Jack, Kyle, and Diane go to Society. She hopes that things will actually be going well now. Kyle has to take off for a meeting.

Jack asks her about what Phyllis said about Nikki discovering things in LA. He wonders if there is something she hasn’t told him.

She says Victor implied there could be some bad news for her coming back with his wife but she has no idea what it would be. Jack is sure Victor was just needling her.

Diane is adamant that there is nothing from her time in LA that could undermine her. He hopes so. He’s exhausted.

Before they leave, she gets a text from someone saying they just arrives in Genoa City and need to meet. She bustles off with a worried look.

Back at Jabot, Summer tells Kyle that her mom just wants the families to be happy.

She’s sure nothing will get in the way of their vow renewal ceremony.

Chelsea stops by Victoria’s office and she’s not welcomed. Victoria says that things with Johnny went exactly as she worried they would.

Chelsea is confident they can slowly nudge Johnny into wanting her in his life.

Victoria accuses her of trying to weasel her way into the child’s life. No one will be nudging him along.

Chelsea says she loves him too but Victoria reminds her she gave away all her rights to be part of his life.

She won’t stand for her injecting herself into his life.

When Nate gets home, Elena tries to avoid him.

She doesn’t want to fight but she knows she can’t have an opinion and she can’t stay quiet.

He wants her to understand why he has to do what he’s doing.

She points out he’s not being forced to do this, he’s choosing it. Nate feels like his extraordinary skills are being suppressed.

She thinks he’s just mad at Devon and will hurt everyone else indirectly involved, including her. This is about more than business.