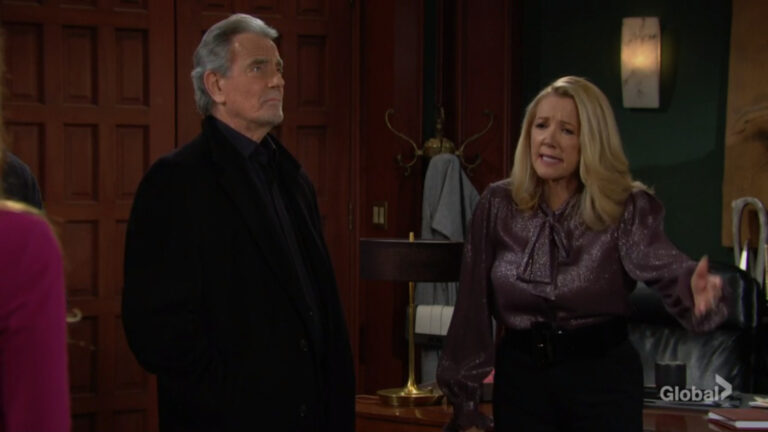 In this episode of CBS’ The Young and the Restless, Victoria tells her family her plans for Ashland, Ashland gets a text and learns Michael got away, while Lauren refuses to let Michael out of her sight.

In the previous episode, Victoria kissed Ashland after Ashland tells her all they need is time and that they’ll be okay as  a couple.

In her office, Victoria tells her family that she’s leaving to meet with Ashland to tel him she believes in him and still loves him. They can’t stand in her way.

Nick asks why they should let her. “It’s the only want to save the company,” she reveals.

He wants to know what her plan is. He starts yelling and when she’s upset that he had her followed, Victor yells some more that her surveillance was for her safety.

She thinks he just doesn’t trust him. She yells to stop trying to treat her like a little girl. She knows what she’s doing and tells them to back off.

Nick asks her to promise not to believe in Ashland. He asks if she’s lying to Ashland about it. She says she owes them no explanation, especially since they went behind her back.

They don’t trust her judgment! Nikki refuses to sacrifice her daughter.

They remind her they’re family and nobody loves her more than them. Victor begs her to listen. They need a plan as a family to get rid of Ashland Locke.

Vic is unconvinced. She tries to talk him around. He finally comes around and she thanks him before she goes. Victor tells Nick that he has a plan.

Ashland looks at his watch at Society as he waits for Victoria. Abby turns up and greets him. She’s happy to see him. She hasn’t seen him in a while.

She assumes running Newman is time consuming but she asks for him and Victoria to join her and Chance in a night out. He’s surprised she hasn’t spoken with Victoria and smiles. They’d be delighted.

He receives a text that reads, “Michael Baldwin got away from us.” He’s clearly uncomfortable as Abby asks if that’s Victoria telling him she’s on her way.

He lies that it’s business and she leaves him to make a call. Ashland tells someone on a call that Michael Baldwin can’t leave, that they are to take care of this, once and for all.

He leaves a message for Victoria, hoping she’s just running late and that she’ll be there soon. Abby returns and notices he’s tense.

He admits there’s “something major happening,” but turns the conversation back to her. She asks after his health, He’s as healthy as can be, he says.

She calls it a miracle and asks about Dominique, saying his name wrong. She corrects him and says he’s getting better daily. She shows him a cute photo.

She says Chance is talking about going back to work. He’s all for it “being good for the soul.”

New! Y&R spoilers up to April 1

Michael Mealor is back on contract

At Crimson Lights, Lauren finds it hard to work when Chloe tries to show her new designs. She’s too worried about Michael and Kevin, who is on his way to find his brother.

He’s in San Diego but she doesn’t know why. 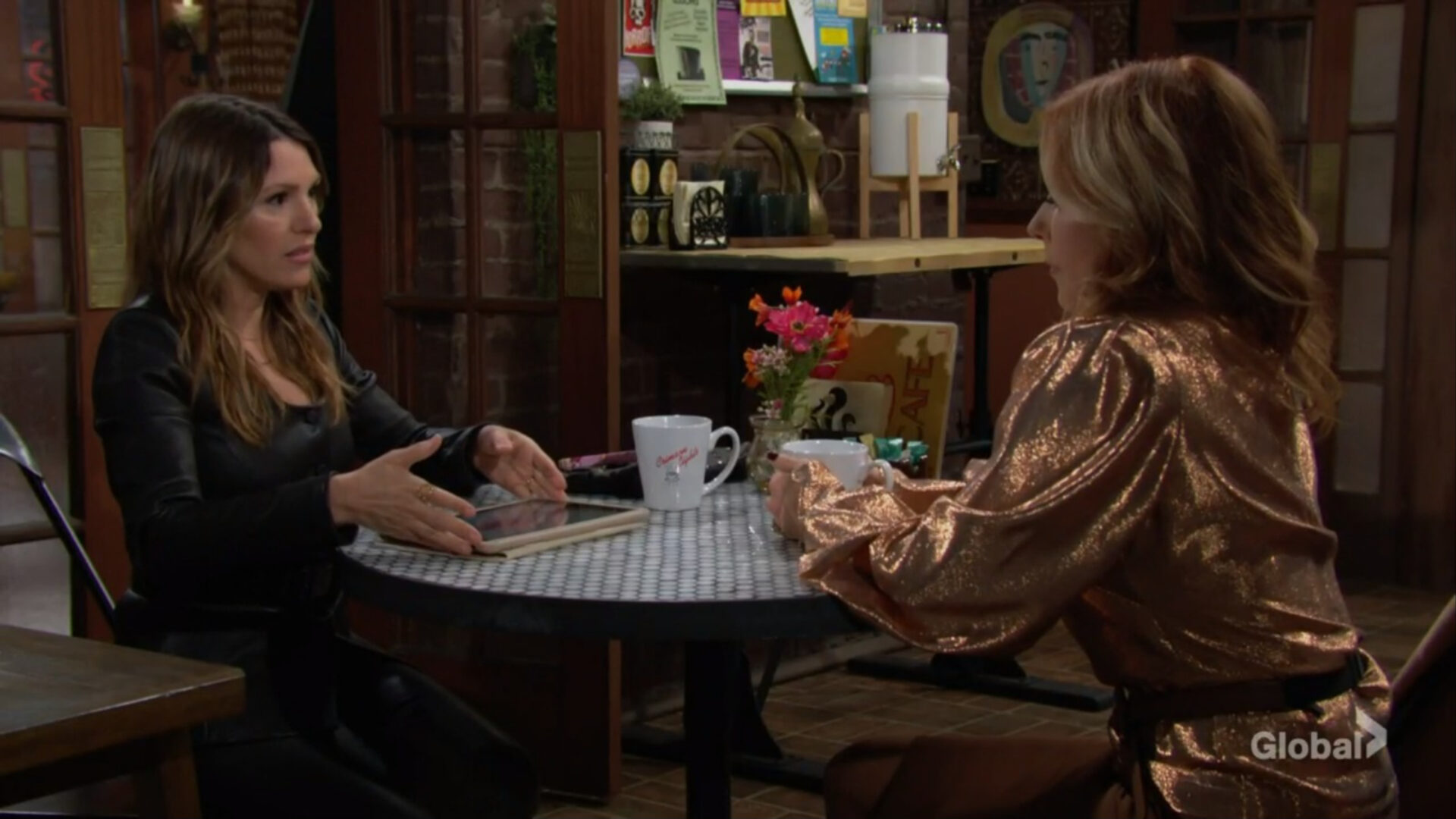 She reveals that he hasn’t called her back since last night, which makes Lauren worry more. She tears up. She can’t take this anymore.

Chloe tries to distract her but she’s beside herself. Kevin wanders in with Michael behind him. “Michael,” Lauren says, in shock.

Michael says, “Hello, Gorgeous.” He goes to her with a passionate kiss. He tells her she got more beautiful while he has been away.

They profess their love and kiss some more.

Kevin and Chloe hug. She missed him. Lauren wants to get Michael home to shower but he needs to see Victor. Everyone looks away, not happy to hear that. She refuses to let him out of her site.

She calls his job a mistake and stressful. “Where have you been? What’s happened to you and who is responsible?” She asks. He tells her it’s okay. He admits things got rough but now he’s home.

Kevin helped him. Lauren asks why they didn’t call when they found him in San Diego. Michael doesn’t want to leave her but he needs to see Victor. “This is an urgent situation.”

Lauren refuses to let him near the man and blames him for getting into this mess. He promises he’ll be back within the hour and kisses her before he goes. Lauren goes after him and Chloe starts in on Kevin about leaving her worried. He apologies.

Victoria arrives at Society and watches from outside as Abby tells Ashland she has to go. They say goodbye and Vicky watches him make a call. She goes inside and greets Ash.

She needs a drink. He worries that her family is bashing him but she says she can handle them. He asks what they said about him.

She tells him they’re on the warpath, that he’s broken her heart. She tells her husband that she’s right there by his side. Ashland’s lips part in surprise.

He  needs her love and trust to get through this. “Yes, and you have it,” she says. She knows her dad will come at him. They need to be prepared.

He asks her to come home and she instead wants to go to the villa and strategize. She talks him into it and then reveals that she already handled everything.

Michael arrives at Newman Enterprises and Victor greets him with a hug. He’s glad to see him. Lauren enters and tells the men she wants to hear what he has to say to Victor. Trumped up espionage charge and the police wouldn’t let him make a call.

He knew the charges weren’t real. They were local cops. His phone and wallet were taken from him. He couldn’t even hire a lawyer.

He says he charmed his way out. He befriended a guard named Javier and gave him legal information to save his family home.

The man owed him and later recovered his passport and gave the name of a friend at the dock. “He let me slip away.” Lauren’s thankful for Javier.

Michael is sure Ash was behind his arrest but he has no proof. He worried that the man was listening on their calls so he couldn’t risk calling them. He was a fugitive.

He called Kevin. He couldn’t call her because she would have wanted to go with Kevin to find him. He tells her not to blame Victor but she admits that’s not going to happen.

Victor tells Michael that they need to find a way to get rid of Locke from the family and company.

At Crimson Lights, Nick and Nikki talk about Victoria’s plan. Nick worries she’s playing with fire. Nikki worries about her emotions. Nick admits he knows she talked to Billy about this mess.

Still, Nikki’s worried. Nick vows to get rid of Locke on his own if Victoria is serious about staying with him.

Outside, Chloe fishes for information about where Michael has been. Kevin says he got a text from an unknown number, supposedly Michael.

Michael told him not to tell Lauren or Chloe. Kevin tested him and asked if he should tell Gloria. Michael said he could if he wanted to but she won’t care.

Kevin knew it was his brother and they met at a park. Kevin found him frazzled and scared.

He was eager to get home. “He was looking over his shoulder the entire time.” Kevin confesses Locke’s behind it. He won’t forgive Locke anytime soon.