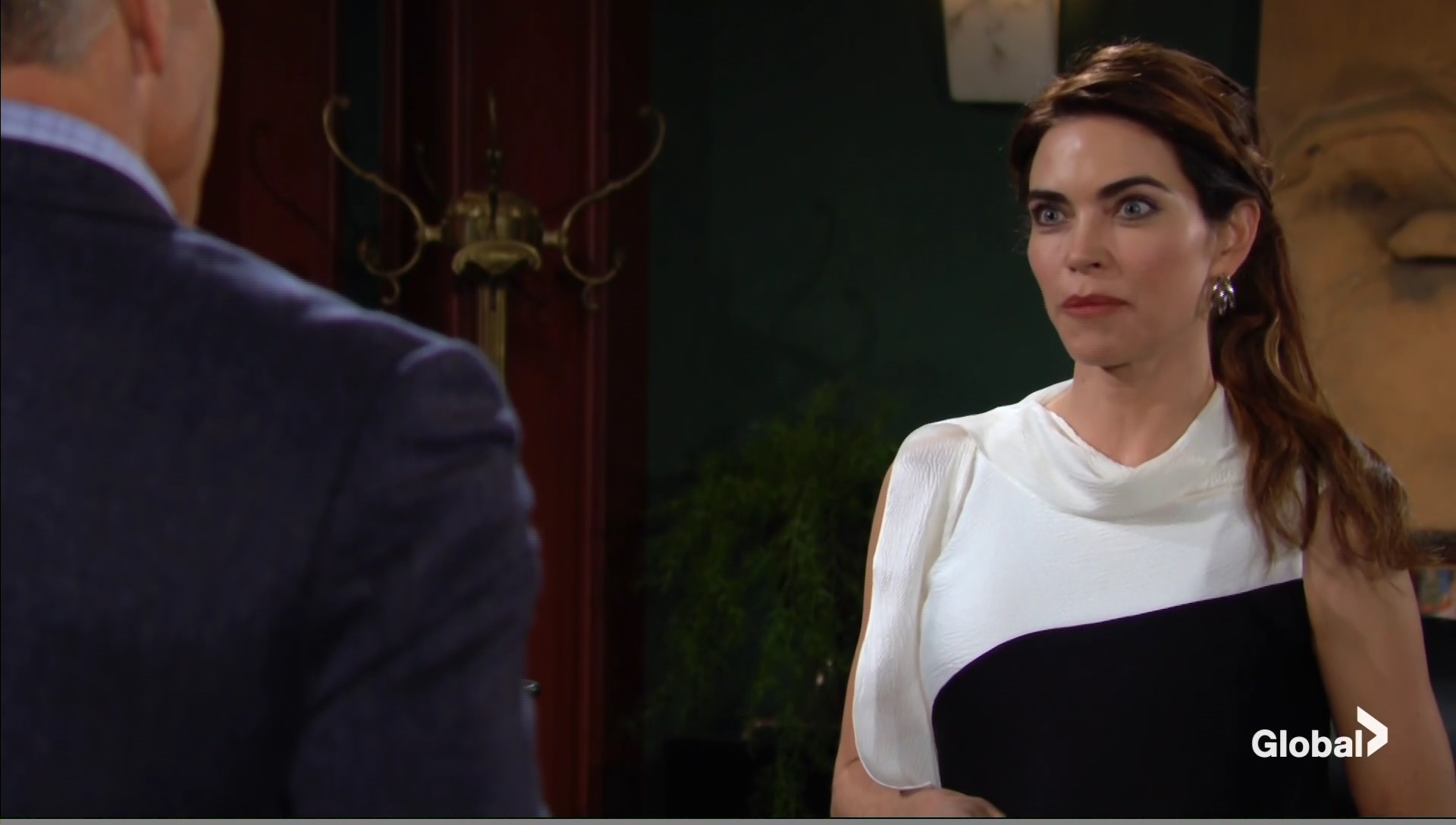 Soaps Spoilers has the Canadian Y&R day ahead recap for the Wednesday, September 22, 2021 episode, which airs in the USA Thursday, September 23, that is uploaded by 5:45 PM EST daily. In the previous episode, in a standalone episode, Jack considered his feelings for Phyllis. In this episode, Billy gets intel on Gaines, Phyllis and Nick discuss Victor’s father, and Nikki and Victoria continue to plan the wedding.

At Society, Lily and Billy discuss their trip to Italy with the kids for Victoria and Ashland’s wedding. Lily asks him to chill around Ashland or risk him deciding that they’re uninvited. They discuss how Victor has sized him up and figured he was more like him and a friend than anything. Gaines wanders in and Billy tells Lily that the man who just walked in is the one he saw meeting with Locke. Billy says Ashland doesn’t like the man. It was clear. Lily knows her boy is good at reading people. Billy says the man could be useful. He needs to find out who he is. A server appears for Gaines’ credit card to pay his lunch bill. Lily goes to the server to ask for a menu and reads the name on the credit card while the server grabs a menu. Lily thanks her and takes the menu to her seat and tells Billy that the man is Jesse Gaines. Billy jumps on his cell phone and looks the name up. He’s from New Jersey, where the two stations are located that Ashland acquired. The guy is younger than Ashland. Maybe he works there. Billy and Lily follow Gaines.

Nick comes out of the shower in a towel and flashes to Phyllis telling him about Jack sharing his feelings for her while he was drinking, which is why she didn’t say anything. She didn’t think his feelings had anything to do with her or them and hoped Nick wasn’t insecure. She wound up seducing him. He goes downstairs and finds Phyllis. She got up early because there was an issue with the freezer. He tells her he’s glad they’re okay. They put the whole Jack thing aside. “You really outdid yourself,” she tells him, “and that’s saying a lot.” She laughs. “You’re welcome,” he says with a grin. Phyllis’ heart aches for Jack since he’s lonely and alone but she believes she’ll find the perfect match for him. Nick nods. They decide to meet at the park later. Billy finds Gaines and pretends the name is a blast from the past. He says he knew someone in Jersey who was a Gaines. They get to talking and Billy pretends that he knows his dad from the TV stations “or something.” Gaines says it’s amazing that he’d remember his father’s name since he hasn’t worked in years. Billy calls his brain a steel trap.

In Victoria’s office, Ashland asks for three million dollars in an hour, from someone named Douglas. He knows it’s excessive and calls it an impulse purchase for his beautiful bride. The seller is old-fashioned and stubborn and insists on USA currency. Douglas seems to argue and Ashland demands he find a way to get the money. Victoria walks in on him and Ash looks like a deer caught in the headlights. He disconnects and Victoria says, “I guess I wasn’t supposed to hear that!” She thought his call sounded mysterious. “Does anyone deliver bundles of cash anymore?” Ash asks her not to ask questions. She assumes she’ll have to wait until they arrive in Italy to find out the details. They discuss planning the wedding with Nikki and how Ashland likes her independence. She knows that he’s protecting her relationship with her family and how her parents’ act is up to them. He agrees and thinks it’s wise of her to recognize. She knows she can’t control what people think or feel. Ash calls her ahead of the game. “I have my moments,” she says. He goes and she flashes to him giving her the portrait of herself which hangs in her office now. Nikki wanders in and is shocked to see the portrait. “It’s beautiful.” Nikki says Ash has exquisite taste and wonders how her father will like it. Victoria says, “Newman is mine now.” They get into wedding planning and ooh and aww over how everything is going so well. “It’s exactly how I envisioned it.” Nikki asks if she had doubts. Victoria says she hasn’t. They discuss Ashland’s past and how he won’t tell them his real name because Billy backed him into a corner. Victoria tells her mama that Ash is planning an extravagant surprise. Nikki smiles. It reminds her of Victor’s larger-than-life gestures. Victoria smiles. She hopes Ashland has fun with it. She wants him to focus on this.

Phyllis meets Nick in the park. He loves football and tells him he signed up to coach Christian’s team. Phyllis is surprised. She’ll cheer them on, but knows nothing about football. Nick’s excited. He knows everything there is to know about it. He asks her to try. He tosses a football at her and it hits her in the belly and falls to the ground. He tells her they’ll work on it. They mess around with a football and then discuss Ashland’s “crappy childhood.” It reminded him of confronting his dad’s dad, Albert Miller. “He said crazy things to my dad. I felt so bad for him.” It was one of the few times he’d seen The Mustache cry. If Ashland’s dad was like that, Nick could understand why the man wanted to get away from him. He doesn’t want to make the man relive his past, but he admits he spoke with Rey about it. Later, they play a little football and Nick asks her to co-coach with him but she’s too busy. “I’d get red carded and thrown out of the game.” Nick makes a face. “That’s soccer.” She agrees to come to all games with snacks and she’ll cheer him on but nothing more.

Lily stops Ashland on his way into Grand Phoenix and loudly says, “Hello Ashland, how are you?” Billy glances over and turns to Gaines, saying he can see now why he’s in town. “Because of Ashland Locke.” Locke rushes in and tells Billy he’s met one of his lawyers. He lies that Gaines is here because of the merger. Billy asks if Ashland knows Jesse’s father. “Jesse’s father is a good man and we all miss him,” Ash says, clearing his throat before he takes Gaines away. Lily appears and Billy tells her something is up.

In the park, Ash tells Gaines that he’ll get him half a million today and as soon as possible, he’ll get the rest of the three million. He doesn’t want to call undue attention to their arrangement. “That’s the point of blackmail.” Gaines asks, “What if you die next week?” Ash retorts that he’ll live long enough to make the lawyer a wealthy man. Gaines says Billy Abbott is suspicious already. He knows that the journalist wrote that exposé on Adam Newman and that he’d love nothing more than to write an exposé on him. If he learned how Locke managed to buy Camila’s stations, it’d make a good story. He wants the rest of the money in three days or he’ll go to Billy and sell Locke’s story.

In their room, Nick rubs Phyllis’ feet in bed. He’s deep in thought. “Are you mad at me because I don’t want to be an assistant coach?” She asks, laughing. He smiles and says no. He asks her for help in finding out who Ashland Locke really is. Nick says it’ll be risky upsetting his sister but he knows Locke’s got to be hiding more. Phyllis tells him that Victoria will never need to know. They agree to go ahead with the search.