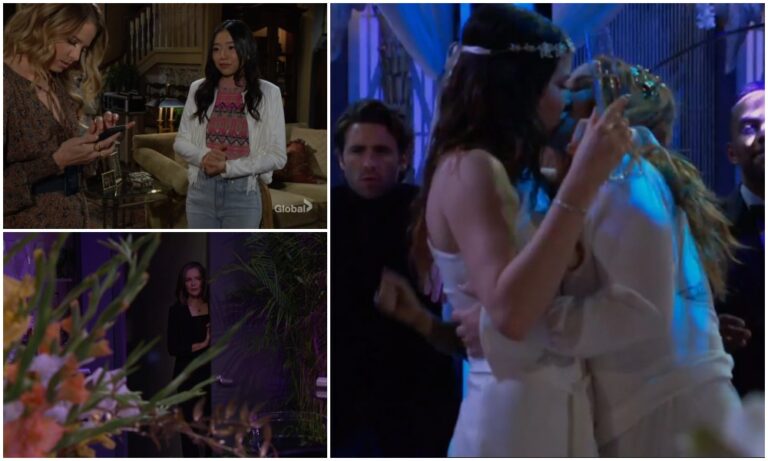 In this episode of CBS’ The Young and the Restless, Mariah and Tessa are blissfully married, Summer and Allie show up at the wedding and Diane crashes it, much to Kyle and Jack’s disbelief. In the previous episode, Tessa and Mariah’s wedding began, as everyone gathered at the Top of the Tower.

At the Top of the Tower, Kyle begins the wedding ceremony between Mariah and Tessa as family and friends look on.

He takes out a piece of paper from his coat and reads. “This wedding will be the funkiest most bad ass wedding you’ve ever been to.”

Everyone claps. The women laugh.

Tessa shares her vows. She says she knew today would be the happiest day of her life because it was the day they began their married life together.

She never thought she’d be there because she gave up on love. Mariah broke down all her walls and saw all of her. She chokes up. “The best in me. The worst.”

They laugh. She says Mariah embraced her. Their connection is unlike anything she’s ever seen that fills her soul and inspires her. Every lyric and every note of every song is about her and the love they share.

Everything she’s learned about love is because of Mariah. She can’t wait for their future together to see what lessons they learn along their beautiful adventure.

She promises to be her partner, her best friend, champion and shoulder to lean on. “Now and always.”

Mariah tears up. “Wow.” They laugh. Mariah wanted this for so long but she can’t believe they’re there.

Growing up, wishes didn’t come true for her and she never had much. Then a miracle happened. The first miracle of the two great ones.

She found her mom and Sharon has taught her so much. How to love and how important it is. “I was ready for you when you came along even though I didn’t know exactly what was happening.

I just thought I had met an amazing person who  was going to become my friend.” She realized it was more. When Tessa held her hand, it felt right.

She’s grateful Tessa’s in her life and swears she’s magic. “You are like an alchemist. Everything you touch turns to gold and so here we are, committing our lives to each other, about to start our own family.”

She knows there’ll be good times and bad but she promises to be by her side through it all. “I love you and I am yours today, tomorrow and forever.”

Allie helps Summer into the Abbott house when she turns up with massive suitcases. They introduce themselves and Allie realizes Phyllis is her mama.

Summer’s surprised she met all the Abbott’s at once. They talk about how awkward it was.

They discuss how they met through Diane and how crazy it all is. Summer’s late for the wedding so they better get dressed and go.

Allie’s shocked she wants her to come along. She doesn’t think she can do that but Summer insists. “If Mariah wants me there, I’m sure she would allow a stranger like you with open arms.” Allie admits she’s a fan of Tessa’s music.

Back at the wedding at the Top of the Towers, the women say their I dos. They exchange vows, offering all they are and all they hope to be.

Kyle pronounces them officially and blissfully married. He invites them to kiss the bride so they kiss and everyone claps.

Diane pokes her head around the corner with a smile.

Tessa and Mariah share the first dance as a married couple. They did it. Tessa says Mariah looks amazing.

They kiss while dancing and Sharon smiles, watching. Nick knows what she’s thinking. Rey would have loved this.

Sharon admits that’s what she was thinking. Nick smiles. “He’s here. He’s with us. So is Cassie.”

Kevin watches the happy couple and tells Chloe the power of love can conquer all.

She swats him. he says things were touch and go for a while.

He tells her they on the other hand were written in the stars. “Nice save,” she says. “Just a few years ago, [gay marriage] wasn’t legal.

Now, nobody would even question it. Two people should be able to marry whoever they want.” Kevin thinks that was well said. He spins her around on the dance floor.

Couples begin joining in the dance. Mariah and Tessa tell each other how happy they are and share another kiss.

Mariah. Abby and Amanda interrupt and tell them how gorgeous they look. Mariah says to save a dance. They run off to get champagne.

Noah finds Crystal and she tells him what a great job he did. He asks her to dance and they dance with Elena and Devon as Phyllis and Jack watch, smiling. Moses and Faith get out there.

Summer and Allie stroll in and Kyle comes to hug his wife. Phyllis spots Summer and yells, “Supergirl!” They embrace.

Jack hugs her and shows Allie around, though she’s nervous. “I missed you. Not as much as Kyle,” Phyllis jokes to Supergirl. She lets her and Kyle catch up.

They hug again and share a kiss as Diane watches from the door, unseen.

Tessa tells Amanda about their secret honeymoon, away from Mariah’s ears as Devon tells his friend how happy he is for her.

“You’re glowing. You look like you got sunlight coming out of ya.” She thanks him. Without him, she wouldn’t be there, or with Tessa. They hug.

She thinks they’re more than friends. Phyllis says he invited her because Summer was coming. Nearby, Allie meets the brides.

They welcome her with open arms. “Any granddaughter of Jack’s is a friend of ours,” Mariah says.

Nick hugs Summer and Faith appears and hugs her. She wants to hear about her job and how her Italian is.

Summer notes Kyle looks tired. He can’t sleep, he says. He needed her with him. She wishes she would have come sooner. They embrace and Diane comes out of hiding. Phyllis watches, scowling.

Abby stops Crystal, happy to see her and that Rey got her charges dropped. She offers to help with anything while she’s in town. Crystal’s grateful and congratulates her on her husband and baby.

Elsewhere, Chance congratulates Sharon, who is overwhelmed with Joy.

Chance notices she’s been alone most of the night. She’s thinking of Rey. He tells her to dance.

Jack and Phyllis dance and she reveals Diane’s there. He’s shocked and angry. Phyllis has it under control and says she won’t make a scene.

Summer finds Mariah and congratulates her. She means it. Everyone deserves a chance at love and happiness. Even her.

She hugs Tessa and tries to go to hug Mariah and Mariah ducks out. Summer says she really has changed since motherhood.

Mariah waits for a put down that doesn’t come. Tessa forces her to say thank you to Summer. She does through gritted teeth and they laugh.

Kyle spots Diane and excuses himself to snipe at her for showing up. What is she up to? She just wanted to see him.

Kevin gets up and says a speech. He thought the ceremony was fun, colorful and full of love. It captures their essence.

Everyone has been rooting for them. The guests cheer. Kevin says their happiness is there’s as well as their love and joy.

Everyone raises a glass to Mariah and Tessa. Tessa thanks everyone for coming. “Yeah, even Summer,” Mariah jokes.

Tessa says it’s time for the real wedding to begin. They turn the music up and  dance. The brides kiss.

Wednesday’s Y&R recap: Phyllis kicks Diane out of the hotel and then kisses Jack, as Mariah and Tessa receive a special gift.