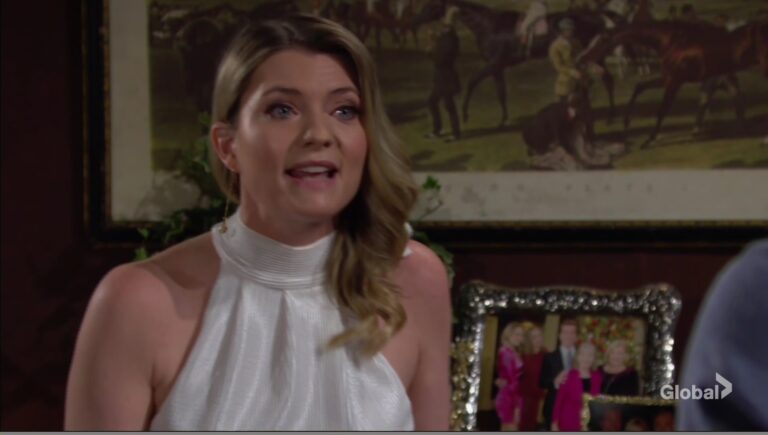 The Canadian Y&R day ahead recap from the Friday, July 30, 2021 episode, which airs in the USA Monday, August 2. In the previous episode, Tara eavesdropped on Kyle and Jack as they started to wonder if she was on the up and up. In this episode, Kyle and Tara argue, Ashland and Victoria spend time at his place in New York, and Phyllis heads to L.A. to get proof that “those two little girls” ran her daughter out of Genoa City.

Phyllis quickly disconnects her call with Angelina when Nick arrives home from Milan. She drags him into the elevator to show him how happy she is to see him. They make out. Upstairs, after sex, she tells him, “You’ve been better.” They laugh. She’s joking. He needs to go away more often – the sex was hot. He notes that she couldn’t get off the phone downstairs fast enough. He thinks she’s up to no good. She fills him in. “I have a story to tell you…” Later, after telling her about Sally and Tara’s shenanigans, she finishes by telling him “those two little girls did something malicious to send Summer to Milan.” Nick asks for proof. She’s working on it. She’s leaving for L.A. tonight to get it. She gets out of bed and they dress. She talks about Sally being dishonest and says, about Tara, “She cheated on her husband, she faked paternity. She can’t be trusted.” He agrees. She thinks they made it impossible for Summer to fight back. Nick noted that Summer seems happy in her new role. Nick offers to go but decides to stay behind.

At the Abbot home, Jack tells Tara that as parents, there’s nothing they won’t do for their kids, including pushing the envelope. It can happen to anyone, he says. He asks her for the truth. Tara claims she’s being as honest as she can and if Phyllis wants to cause trouble, she can’t stop that. Lauren arrives to see Tara and Jack leaves. Lauren questions Tara about his demeanor and Tara shrugs it off. They talk business and style. Tara thinks their partnership will pay off. Lauren isn’t ready to go there yet. She talks about not receiving some documents from her yet and she can’t proceed yet until she receives those. Tara feigns surprised and says she’ll get those to her. Lauren says goodbye and Tara looks as though she’s in trouble.

At Society, Sally complains to Kyle that Phyllis interfered in her relationship with Jack. She calls the woman a conniving liar. Kyle thinks she sounds defensive like she’s lying through her teeth. She asks why he can justify believing Phyllis over her. “You better hope I don’t find evidence,” he tells her. He goes and she sees Jack. They stare at each other. She asks him to hear her out and wonders if he reconsidered and came to find her since they were supposed to have their date here tonight. She thinks deep down, he doesn’t believe she did anything wrong and that they had something special. He agrees that everyone deserves a fair break. He admits he hasn’t been attracted to anyone like this in a long time. He wishes it was enough but it isn’t. Sally looks hurt. Jack hopes Phyllis’ allegations aren’t true but it’s given him pause. He’s been around the block. He takes off and she runs after him and asks him to tell her what to do to fix this. He says there is nothing.

Ashland lets Victoria into his condo. She’s delighted by it and finds an Anne Schwartz painting. She swoons over it as behind her, Ash clutches his chest and sits and tries to breathe. It passes and he says he can’t wait to introduce her to his colleagues. He talks about his Hamptons house and that he didn’t use it much. It was Tara’s domain. It was a place for her to cheat. He’s changed. He used to plan everything and now, being in the moment with Victoria is what he’s all about. He looks at the Schwartz painting and admits he’s never noticed it before she mentioned it. “Everything’s always better when I’m with you.” Later, she wakes up in bed and Ash is looking at the painting. He’ll bring it back to Genoa City and leave the rest behind. He’s free from his past now, due to her. She thinks he’s giving her too much credit. Later, he gets an appointment with a specialist for tomorrow. He wants Victoria to go with him.

Kyle returns home and finds Tara working on some documents. Ash’s assistant tells her he went to New York and he’s selling all their assets, including their shared homes and liquidating contents. She put a lot of love into the homes. It hurts. Kyle can see that it’s jarring to feel terrified that she’d be homeless if she wasn’t in this situation living there. She looks taken aback. She’s not sure what he’s driving at. Kyle says she never mentioned how important the houses were until now. She tells him her whole life has been ripped apart. She’s grateful of the things that took place of things she lost. A new family to love their son, a family that accepted them. She’d never jeopardize this. Tara becomes offended and thinks he’s studying her, trying to gauge whether or not to trust her. He wants to be able to. She tells him she feels the ground shift between her feet. She feels it with Jack too and says that the lack of trust is “like a seed and it grows and grows, and becomes something else. And I can’t live this way and I won’t.” She takes off in a huff.