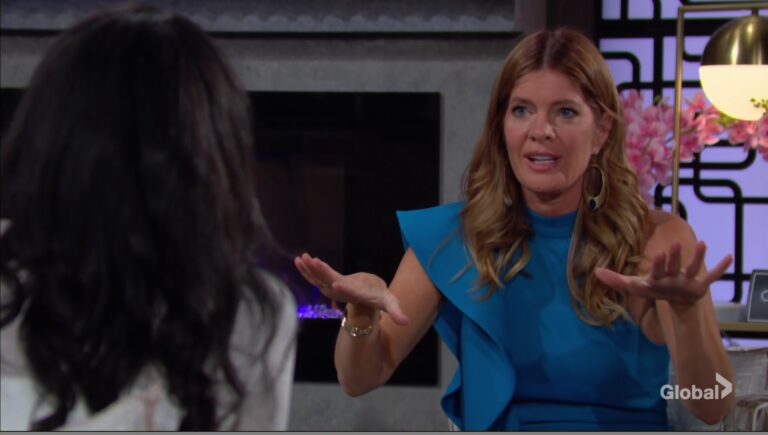 The Canadian Y&R day ahead recap from the Friday, July 16, 2021 episode, which airs in the USA Monday, July 19. In the previous episode, Tara lied to Jack and told him that Phyllis blamed her for Summer’s move. In this episode, Victor is playing Sutton, Billy changes his tune about Locke, and Tara eavesdrops.

At home, Billy tells Lily that Ashland is moving into Victoria’s. “My head almost exploded. I would have loved to see the expression on my face,” he tells her. She asks about the kids. He explains she wants them to take the kids more. They agree they’re fine with the kids staying with them but that this is fast. He only has a few months to live. Lily finds that awful and Billy isn’t sure Victoria knows what she’s signing up for. Billy’s worried and doesn’t see how the kids will be impacted. Lily thinks they’ll work together to make it easy. Victoria’s a good mom. She’ll handle this responsibly. Billy wonders if she’s doing this because of the merger. Lily doubts it. Caring for a terminally ill patient is brutal. They agree to have the kids over tonight and then Billy takes off to take care of something.

At Victoria’s, she introduces Ashland to Katie and Johnny. Katie asks if he likes playing with dolls. He loves it. She explains he’s going to be spending time there and they’ll spend more time with their father. They’re cool with that and toddle off to do whatever kids their age do. Ashland has breathing issues and then asks if she’s having second thoughts with him staying there. She’s not. “I don’t deserve you,” he says. She feels lucky to spend time with him.

At the manse, Kyle and Jack discuss Ashland and how afraid Harrison was in the park. Jack thinks Ash was protecting his son, trying to shield him. They’re thinking of getting sole custody. Kyle can’t expect him to handle this perfectly. Kyle hears his dad but needs to do what’s best for his kid. Jack’s confident he’ll make the right decision for his son. He goes and Tara is seen eavesdropping. She appears and tells him Harrison woke up terrified. She wonders if she should fight to keep Ashland away from her kid. She says she truly believed the diagnosis changed him but seeing him at the park has meant she no longer believes it. She thinks Ashland seeing them at the park was an issue for him. Kyle talks about wanting the best life for their son. Tara says she’s reassured. Kyle takes off for work.

At Crimson Lights, Amanda and Devon wait for Victor to call.

In his office, Victor listens as Sutton calls Amanda a disappointment. Victor has a solution to his problem with her. He tells Sutton that Richard came to him during the search for her ex-girlfriend’s twins. He steered him in the direction of a PI. Sutton had no idea and says it’s unfortunate it didn’t pan out. Why is he sharing this? Vic says a few days before Richard died, he sent Victor a letter. The contents might be of great interest to Sutton. Sutton isn’t sure he believes there is a letter. Victor offers an arrangement. He’s not a friend to Amanda and says the contents of the letter are valuable. He’s the only one who knows what’s in it. “That letter can be yours for the right price.”

At Crimson Lights, Jack sees Sally. “Whipped cream or foam?” She asks. He’s a purist. She asks if they’re having awkward banter or is he going to ask her out. “How about tonight?” She agrees to it and goes, forgetting about her coffee. Jack orders a plain coffee and Phylis runs up. She starts talking and he tells her not to discuss Sally. She wasn’t going to. “Live and let live. That’s my new motto,” she says. He reminds her nobody needs anyone adding to their problems. She’s confused. That’s not what she wants to do. Later, Lily sees Devon and they discuss Amanda’s issues with Sutton and how Lily hopes she finally figures out what the hell’s going on with that. She gossips that Ashland’s moving in with Victoria and that she is brave to risk that emotional pain. Devon’s surprised. She recalls her own cancer diagnosis and admits Billy thinks she’s doing this for the business merger. Lily’s not so sure.

In her Grand Phoenix suite, Amanda tells Devon that she’s been burned so bad she’s not sure if Victor wants to help or not. Devon thinks he’s sincere. Amanda thinks maybe she does.

Billy drops by Victoria’s to get the kids. Ashland says they’re upstairs and should be ready soon. They make small talk. Ash asks if it bothers him that he’s there. Billy’s concerned for the kids. They discuss the video and Ash regrets overreacting as he wanted to protect Harrison. He only made him feel frightened. Billy thinks Ash is in a tight spot. They need to talk to all the kids about his illness. Billy doesn’t get why he’s there. Ash talks about them having a personal relationship. Bily asks why he’d subject Victoria to the pain of losing him. Ashland asks who said anything about dying. Victoria pokes her head in and they talk about being open and honest. Ash says nobody will cajole her into anything. Billy goes to get the kids.

When Tara shows up at Grand Phoenix for a meeting with Lauren, Phyllis overdoes how excited she is to see her. She shares a photo of Summer in Milan and says she’s happy. It worked out for everyone but Kyle. Phyllis thinks he’s hurting. She thinks the time away will make them realize how much they love each other. Tara thinks that might be true but says he’s doing well. She can’t imagine him walking away from Harrison. They discuss the video and Tara tells Phyllis that he frightened Harrison. Phyllis shrugs. Kids are resilient. Tara is taking sole custody. Phyllis almost falls off her chair. “You’re gonna get sole custody from a dying man?” Lauren pops up and then has to get something from the car. Tara thinks Phyllis is a good mother. Amanda pops up and overhears as Tara says she’d do anything for her child as Phyllis would. They’re not that different from each other. She goes and Phyllis holds her head in her hands. “I’m doing a dance with that girl.” They’re trying to out nice each other and Phyllis admits she lost it. She fills Amanda in on how Tara’s trying to get her hooks into Kyle. Phyllis is upset and almost in tears realizing the truth is that Summer left because of Tara. Amanda says Kyle should ensure he has a custody agreement in place before Phyllis does anything. Phyllis says, “I will take her down. It will be steady and calculated, but I will take that girl down.” Talk turns to Amanda’s family and how Victor’s her biggest champion.

Sally turns up at the hotel. Phyllis knows she and Jack are getting closer and she just wants her friend to be happy. Sally’s surprised. Lauren and Tara show up again and Tara lies that she and Phyllis are becoming friends. Lauren sings Phyllis’ praises. Sally takes off and Amanda asks Phyllis what that was about. Phyllis isn’t sure but something is going on between Sally and Tara. “I know it in my gut. Both of those girls’ benefitted from my daughter leaving town.” Sally has her job and “that one over there has her man.” She’s going to prove it.

Billy returns home and has tucked the kids in. He discusses his thoughts on Ashland selling his empire he built his whole life. It’s horrible. He’s just looking for happiness. Billy didn’t see it until now. Lily’s glad. “I’m surprised by my level of maturity. Something I have you to thank for.” Lily agrees. “That’s true.”

Kyle returns home. Tara has made a decision.

Victoria and Ashland have wine when Ash gets word that Tara filed for sole custody of Harrison.

Jack and Sally sit at Society. Phyllis walks up and looks in the window, shocked to see them.