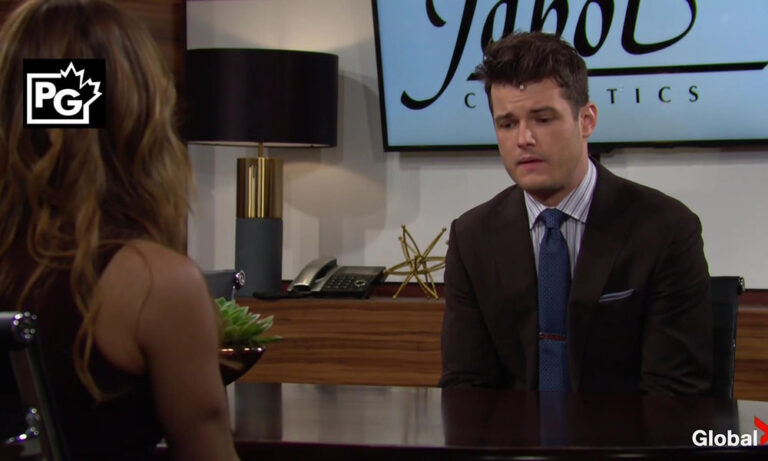 This is the Canadian “day ahead” Y&R episode from the Wednesday, March 3, 2021 episode, which airs in the USA Thursday, March 4. On today’s day ahead, full episode recap of Young and the Restless, Lauren tells Jack about Phyllis’ interference with Sally, Abby doesn’t think that the surrogacy will cause any potential problems, and Ashley turns up again to support Abby.

“You’re a father,” Summer says. She asks when he learned about this and he reveals, “Not long ago.” She realizes he was going to talk to Tara in New York. He was waiting for confirmation before he told her. When Sally turns up they take off and Jack appears. Sally bought Jack a jacket. He reluctantly puts it on and finds it “sharp.” She asks him to wear it the rest of the day and share all the compliments he gets. They agree to dinner at his place tonight. Lauren arrives and is happy to hear about her efficiency ideas. Sally promises there are more to come and she leaves them alone. Lauren brings up Phyllis’s background check on Sally and how she knows Sally’s been researching Sally’s browser history. Jack winces. He admits he’s going into “whatever this is” with his eyes wide open. Lauren laughs when she notices his jacket. She likes it. Sally has great taste. “And I’m not just talking about the clothes.”

At home, Summer and Kyle discuss Harrison. Summer’s stunned. “Your son’s name is Harrison?” Kyle’s afraid of Ashland Locke. He’ll go after him, Tara, and everyone he loves if he finds out he’s not Harrison’s biological dad. Kyle worries it’ll affect Harrison. Summer gets it. Kyle tells her about Tara’s visit and admits Mariah knows about this. “I had to talk to somebody.” Summer asks what he wants to do about this. Kyle thinks he needs to pretend it never happened. Summer encourages him to do something if that’s what he wants. He asks where this leaves them. “It’s a lot. I need some time to think.”

Christine arrives at the Chancellor mansion. She’s happy for Abby going ahead with the surrogacy. Nina cheers that Chance said they should go ahead. Ashley shows up with food to help the decision-making. They go over the contract, which is straightforward. Still, Christine calls the situation complicated. Abby shrugs. She doesn’t think it will be. Jill calls and wants the details on the baby news. Abby tells them they were discussing Mariah and Tessa moving in. Jill thinks it’s a bad idea. The walls can close in on you, like a vice. Ashley thinks she means Esther was annoying. She laughs. Abby says if something happens she wants to be with Mariah and help her through the pain. She’s lost a child and knows the pain. “I’ll hope for the best and I’ll prepare for the worst.” Jill relents. They couldn’t be as irritating as Esther. They clap because they’ve come to a decision.

Devon sees Elena at the coffee house. He’s sorry if what they did has ruined things for her and Nate. He knows she won’t tell Amanda but will Nate tell her? Elena doesn’t think so. He’s waiting for her to tell him that Devon’s out of her system. Elena admits he isn’t. She can’t stop thinking about their night of lovemaking. He has a confession too. He can’t stop thinking about it either but he can’t figure out why. He’s with Amanda and it feels like it could be special. It’s complicated. Amanda turns up and Elena takes off. Amanda brings up the contract. She admires how he honored his relationship with her, Chances best interests, and his own. “You’re a good man.” She thinks it’s no wonder Elena still confides in her.

At the club, Amanda sees Nate deep in thought. He asks for a distraction. She and Devon have been watching a marathon of foreign films but she’s forgotten all the French she learned in college. He laughs and asks her to teach him how to relax. They discuss moving forward with life and he feels convinced he needs to do the same.

Summer meets her mother at work and reveals there’s more to the story about the NYC Kyle almost took. Phyllis asks how they’re doing. Should she be worried? Summer has realized Kyle’s connection to this woman is deeper. Phyllis thinks Summer’s been the happiest with Kyle than she’s ever been. They agree she should hang on to her relationship and her man. Summer hopes Sally stays in her corner. She wants as little to do with her as possible. Summer goes and Jack appears. Jack warns her to leave Sally alone.

Sally finds Kyle drinking alone at Society. She brings up how tense things seemed earlier with him and Summer. He tells her it’s none of her business. He and Summer are fine. He warns Sally to say away from his dad. He’s been hurt by “women like you” before. Sally blows up.

Elena and Nate meet. It’s time to put their cards on the table. Elena calls him kind, smart, and gorgeous. She never wanted to hurt him but she’s still in love with Devon.

Kyle returns home to Summer. She tells him this is where she belongs, right here by his side. Kyle was worried she wouldn’t forgive her. He’s never loved anyone as much as her. “We are in this together no matter what,” she says.

Sally arrives at the Abbott mansion for dinner with Jack. Everyone loved the jacket, he shares. They drink to her. “My new fashion guru.”

Coming up on Y&R!

Jack tells Kyle, “You can always talk to me. The floor is yours.”
Chloe says, “Chelsea you spoke! You said words.”
Chelsea croaks, “Our secret.”