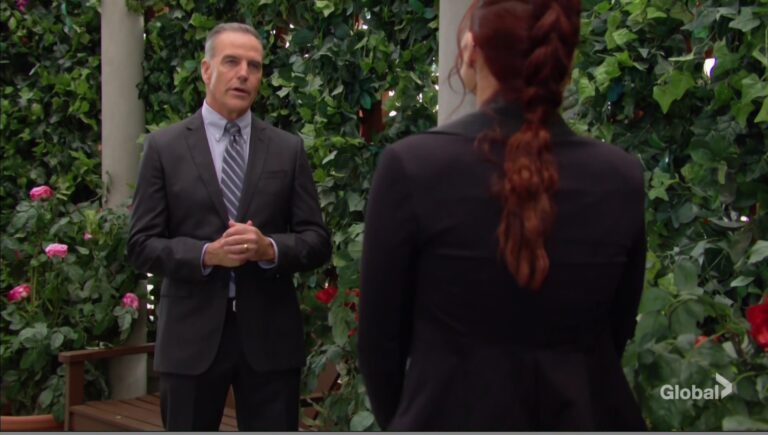 This is the Canadian Y&R day ahead recap from the Wednesday, May 26, 2021 episode, which airs in the USA Thursday, May 27. In the previous episode, Kyle got a paternity test while Mariah took a fall. In today’s episode, Sally gets the dirt on Tara for Ashland, Billy goes off on Victoria for hanging around Ashland, and Summer postpones the wedding.

At home, Lily and Devon plan Neil’s memorial. They talk it up, thinking it’s going to be incredible. They talk it up for a while and Moses appears. He’s off to Crimson Lights to see Faith. Devon tells him to be home for dinner. Lily will see him tomorrow. Once he’s gone, she laughs that Devon’s now experiencing what she has, when the twins’ were teens. She shares that she and Billy are moving in together on Chestnut. Devon says nothing for a bit and then says, “I guess congratulations.” She doesn’t need his blessing but she has it if she wants. Lily didn’t know he’s come around about their relationship. Devon’s concerned about how he treats her. He always has a spare room for her there if she needs it. She laughs and tells him, “Shut up.”

At Society, Sally tells Ashland she can help him find out where Tara and his son are. In return, she asks him to give someone (Summer) a job offer far, far away. Ashland finds it tempting. Later, she’s gone when Victoria appears. “You have made my day a little better.” She laughs and thinks the bar must be low. He invites her to join him in a meal. When she does, he talks about always carving out time for Harrison. She gets it. He loves all the moments he spends with Harrison playing catch and reading stories to him at night. Victoria melts and says that she’d read to Johnny when he was his age. That phase lasted a year. Billy eavesdrops like a fly on the wall. Ashland notices and has to go. Once he’s gone, Billy rushes right over. “What’s going on with Ashland Locke?” She says they were about to eat. Billy fishes for information. She tells him it’s none of his business. Billy tells her about the bitter divorce battle and he doesn’t want to see her get caught in the mess. It’ll affect their kids. Victoria warns that she doesn’t need him telling her what to do.

At the Abbott’s, Kyle worried about Summer. She says taking time away helped her put things into focus. She wants to put their wedding plans on hold. Kyle disagrees. He’s getting flashbacks to the last time she had second thoughts about marrying him. Is she having second thoughts? She’s not but she wants to give planning their wedding her full attention. Jack appears and asks where Tara is. Kyle says she’s upstairs. Jack says he saw Ashland.  Summer goes to take a call and Jack tells his son that creating a negative impression of Tara will be Ash’s central focus. Kyle doesn’t know her well and Jack doesn’t want him getting hit with secrets as this custody case unfolds. Jack’s curious about what Ash meant when he said that when it comes to Tara, he has no idea what he’s dealing with. Later, Tara appears and Jack lets her know that she’ll have to go on the offense about Ashland. Tara calls him a part-time dad at best. Jack asks if he has significant dirt on her that he could use. She looks upset and asks why. Jack tells her about the ominous warning. She calls that a classic Ashland mode. She won’t risk holding anything back from them. She’s done nothing shameful. “Even our affair?” Tara says no because it brought her Harrison. Kyle grins at her. He can’t argue with that. Jack looks from one to the other. Later, Sally shows up and says Lauren wants to see him. Jack tries to get rid of her and Sally takes a seat and asks to chat. He turns her away and she sees Harrison’s stuffed animal and takes off. Jack and Kyle are not impressed. Tara reappears and Kyle tells her how horrid Sally is. Tara invites him to play with her and Harrison. After, they put the kid to bed and talk about playing tag. Kyle’s glad he’s adjusting. Tara is glad to know people are on their side.

At Crimson Lights, Faith tells her mama that Moses is coming to hang out. Sharon’s glad for that as long as her homework is done. Nick wishes all his kids were doing well. Sharon questions him and he says that Summer and Kyle are having an issue. Sharon offers to lend an ear so Nick goes into how he’s against Kyle marrying Summer right now. He’s trying to be supportive but he wants Summer to enjoy her life without turmoil. Sharon says that’s life. Life is hard and marriage is harder. “Look at us.” He knows but it’s rough when it’s your kid. She gets it. Later, Summer drops by and greets Faith who looks “amazing and so beautiful.” Summer’s so impressed by her sister and reminds her that when she was a high school student, she made big mistakes. She goes to follow up with her dad, telling him she’s postponing the wedding. She doesn’t look happy about it so Nick asks if she’s trying to convince him or her? Summer says it’s a hard decision and everything will change once he claims paternity. She wants to ensure Kyle knows where she’s coming from. They agree that they have to keep communication open. Summer tells herself they’ll be fine, but she looks miserable. She goes and Moses drops in. Sharon tells him Faith is on the patio but she’s looking forward to celebrating Neil tomorrow. Nick’s thrilled to partake but there was no time on the invite. Moses calls it an “experience,” and says it’ll be explained tomorrow. Faith wanders up and jokingly accuses Moses of liking her parents more than her. They take off together and Sharon’s ays the kids took on a special project together. Sharon asks if he feels better about talking with Summer. Nick thinks she’s making mature choices but they’ve a long way to go. “This thing is far from over.”

Jack interrupts Billy and Victoria at Society. Vikki leaves and Billy shares that she’s been hanging out with Ashland. He doesn’t want victoria to be involved in some high-profile court case. “Does that mean you?” Jack asks. Billy says yes, and Jack tells him not to jump to conclusions about them. Not to risk Ashland’s wrath.

Billy arrives at the new condo. Lily thinks he seems frazzled. She asks what’s up. He tries to get out of it but she pressures him. He reveals all and agrees with Victoria. It’s none of his business. She urges him to trust her judgment. He hasn’t told Victoria yet about their move.

Ash meets Sally in the park and she admits she wants Summer gone from JC. He admires Sally’s drive and thinks it sounds vindictive. She grins. “Possibly.” He likes the idea. It’ll be painful for Kyle. That works for him. He can make that happen with a call. “Now where’s my son?”

Summer arrives at the mansion looking for Kyle. He’s at the office, Tara says and she’d like to talk. Tara doesn’t take her support for granted. Summer appreciates that. Tara prays everything will work out the way she hopes. Summer asks if she’ll return to New York after the custody agreement. Tara plans on going somewhere new. Perhaps there so Harrison can be close to Kyle.