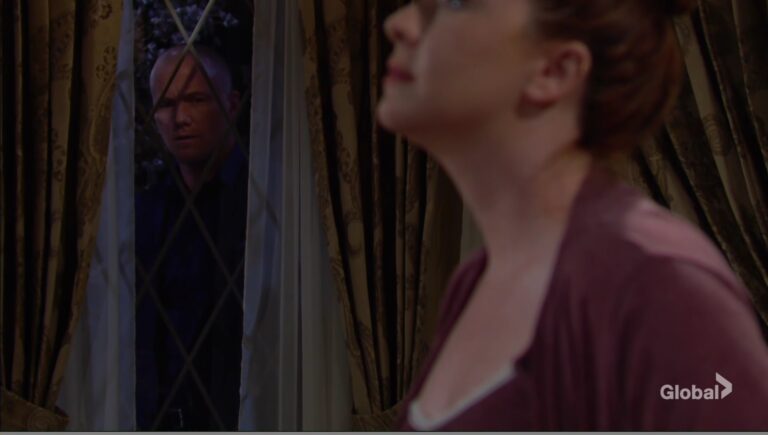 This is the Canadian Y&R day ahead recap from the Thursday, July 1, 2021 episode, which airs in the USA Friday, July 2. In the previous episode, Stitch asked Abby on a date but she declined, and in this episode, Tara fantasizes about Kyle, while Ash reconsiders treatment.

Lily looks at shirtless Billy at home. She calls him perfect and he calls her beauty a gift. They talk about Victoria and Ashland. He has a hard time believing that she’s with him since he’s not her type. Then he realizes he’s an idiot for going on and on about his ex. “Yes you are,” Lily says, thinking he’s an idiot. She asks if they should tone down Victoria’s role in the article. He says no. Lily is concerned that things could get “dicey.”

Stitch sees Victor at Crimson Lights. They happily greet each other and fake spar a little. He’s sorry to hear Max’s brain surgery didn’t go well. Stitch asks how Abby’s doing. Victor thinks she’s doing well, married to a nice guy, and having a baby. Stitch asks how she’s really doing. Again, Victor says she’s great. Nikki appears and is thrilled to see Ben. He nods and smiles, glad she’s healthy. He takes off and Victor seems in thought. They discuss how horrible it must be for Stitch to watch his child fade away.

Tessa finds Mariah on the sofa at the mansion reading a pregnancy book. Mariah feels guilty. Abby storms in and interrupts. She has surprise pasta from Society. Mariah had Abby pick it up. Tessa wonders if it’s late to chow down. They eat and Mariah asks what she felt guilty about earlier. Mariah can’t recall and calls her emotions all over the place. She reminds Tessa of the day that she raged on her for not taking out trash. She forgot that they have a staff to do that. Abby asks if she’s sure and Mariah admits she never thought about carrying a child before this. She feels bad that she’s experiencing it and not Abby. Abby says not to feel that way. She’s glad that Mariah’s not feeling bad about this journey. Abby asks if she can describe the feeling. Mariah talks about her heart beating faster as she rubs her belly and then says she feels a pulse in her stomach or her face is flushed. “That gorgeous pregnancy glow,” Tessa says. Mariah talks at length about her symptoms and Abby is grateful. She goes up to bed and Mariah doesn’t know how she’d survive this without Tessa. Tessa goes to bed and outside, Stitch watches Mariah from the window.

Related: What’s coming up on Y&R next week

Sally and Jack drink at Society. He thinks she can teach him how to not say no. She admits she’s never gotten a yes the first time she asked about anything important. They realize they’re shutting down the joint. They talk at length about how she gets people to do what she wants after being shut down many times over. She talks about her goals of designing again and this seems to tickle him. She hopes to find someone to share her life with. A man and a purse dog. She wants to travel in her golden years and donate earnings to charity. She’d like to earn his forgiveness as well. He asks why it’s so important. She goes on about who she is and how she didn’t expect to fall for him. She says this is not a pitch, but then asks him to put his cards on the table. He says nothing and she wishes this wasn’t a one-way connection. He reveals it isn’t one-way. “There’s definitely something here.” It’s not an invitation though, he tells her. She gets it. He agrees to casual drinking together.

Related: B&B spoilers for next week

Kyle wakes up and finds Tara downstairs. He remembers she used to have insomnia. She’s shocked he recalls. They talk about being together and how fast it ended. Kyle never knew why. She’s sorry. She worried Ash was getting suspicious and she thought cutting things off was best. She wanted to tell him about Harrison and didn’t want to complicate things. Kyle still would have wanted to know. She suggests warm milk and he teaches her to do breathing exercises. She stares at him as his eyes are closed. They hear something and Tara thinks it’s Harrison and rushes upstairs. Kyle looks at Summer’s photo on his phone. He deletes it as Tara comes back. He tosses it and then goes to Tara and kisses her. Tara makes out with him and then comes back to reality. It’s just a fantasy. She tells Kyle that Harrison woke up from a dream. She told him not to worry, his dad is there. They talk about the Hamptons and how she couldn’t talk to anyone about it and appreciates talking with him about it. He tells her he doesn’t regret the time they had. They drink and reminisce about drinking.

Victoria drops by Ashland’s suite late at night. He thinks he’s gotten lucky but she denies it. She tells him her dad believes he’s sick and will do what he can to find out the truth. She urges him to come out and confirm it but he won’t. Doesn’t want pity pouring in. In that case, Victoria suggests they hurry things up. They state that they’re merging and put the sharks at bay. He sees merit in changing the narrative. He loves her passion. He asks, “Would you like to spend the night with me?” She’d love to but has to get home to her kids tonight. “It’s just that I really want you and I don’t want to wait,” he says. She tells him they’ve L.A. to look forward to. “You are giving me another reason to live,” he says. She thinks that might mean he gets treatment. The idea is back on his radar.

Chelsea tells Chloe that Dr. Hedges is not on her side after all.
Stitch says goodbye to Abby.
Phyllis sobs to Jack that she needs him to cheer her up. Nobody cheers her up like Jack Abbott.

Find the rest of the daily spoilers for Y&R.