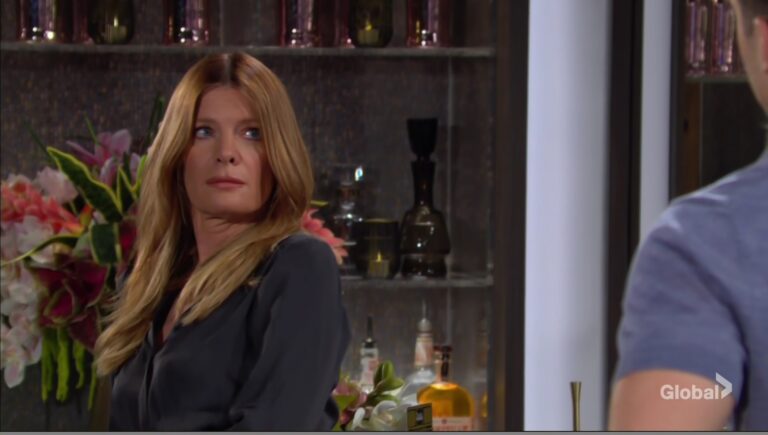 The Canadian Y&R day ahead recap from the Friday, July 23, 2021 episode, which airs in the USA Monday, July 26. In the previous episode, Ashland collapsed and Sharon defended Adam. In this episode, Victoria once again asks Ashland to get treatment, Chloe and Adam have a rough first day at work together, Adam is on Sharon’s mind, and Sharon makes suggestions to Tara that make her uncomfortable.

At home, Victoria is worried the merger was a mistake. He calls her an alarmist. It was an anxiety attack he had. This merger is the most exciting thing he has done in his career. Victoria’s still concerned. Ashland calls her the one thing that keeps his personal life from getting worse. She again asks him to get treatment for cancer. “I don’t want to keep having this circular conversation over and over again.” He tells her. He doesn’t want treatment. She’s having deeper feelings for him and it’s hard for her to hear about him having panic attacks since he’s the strongest man he knows. She gets him tea. “It smells like fresh-cut lawn,” he tells her. They go around again about his treatment.

Phyllis finds Billy in the lounge in her hotel. His meeting was canceled. She jokes that he should have brought Lily. Nobody would cancel on her. He agrees but she took a last-minute trip to see Maddie. They should talk about Tara and Sally. Phyllis is certain they drove her daughter out of town since they benefited. Billy is doubtful that Tara can pull that off but she reminds him that Kyle only told her about Harrison now, after 3 years. They’re in it together and capable. Tara doesn’t want to give up her gilded lifestyle. Billy agrees. Hooking up with Kyle ticks a lot of boxes. Phyllis says Summer recommended Sally for her job at JVC. Neither gets why. “She hates Sally,” Phyllis admits. “We need to find out why she was manipulated and we need to expose it and my daughter will come home.” Billy asks if she really wants to. He thinks they were doomed from the start. Phyllis suddenly realizes why his meeting was canceled. “Cause you’re a bum out.” Phyllis cries about what the women did. “We must expose this. I can not. I will not let this stand.”

At home, Tara tells Kyle she doesn’t like how Phyllis dropped by their table last night. She’s certain Phyllis thinks she’s responsible for Summer taking that job in Italy. “Well, you are responsible,” he says. He explains why she left and that the signs were all there and he didn’t want to see them. In a way, her leaving him was honest. “She broke my heart in ways that I couldn’t have dreamed of, but she did what she had to do.” Tara claims to be sorry. It’s not his job to make her feel better about this. He thinks it is. He offers to ask Sharon Rosales over to discuss Ashland’s illness with them and how to go about doing things the right way for their son. “You amaze me,” she tells him. She thinks he’s the best. Sharon visits them moments later. They talk about the video of Harrison and Ashland in the park. Kyle calls it an isolated incident and they think it’s important to have a solid plan. Sharon asks what kind of plan. They wonder how much access he should have and how to talk to the kid about his illness. Sharon worries about eliminating Ashland from the conversation. Limiting their contact will ensure Harrison feels abandoned. He needs to know his father loves him despite everything. She thinks Tara and Ash need to talk to Harrison together and be loving, gentle and truthful. Kyle thinks it’s making a lot of sense, though Tara looks uncomfortable. Once Sharon’s gone, Tara admits she doesn’t want to go with Sharon’s idea. She thinks Ash is furious with her already. Kyle defends Ashland. It may not be that hard and it may lead to a compromise that will help Harrison. “That’s what this is all about, right?” She hates living her life under a microscope. She worries he and Jack will judge her. He vows that he and his dad are in her corner. The stalemate with Locke has to end. She must agree? She finally calls Ashland.

Sharon fills the salt shakers as Faith and Moses talk about Tigirlily. Sharon talks about “Adam” coming home. “Don’t you mean Rey?” Faith asks. “Isn’t that what I said?” Sharon replies. She asks Faith to take over for a few minutes. She has to run errands. Moses and Faith look at each other, concerned. Faith attempts to brew and makes Moses drink her concoctions. He’s had enough and so talk turns to going backstage at the concert. Nate arrives and orders an espresso while he and Nate talk. Moses looks worried. Nate brings up him becoming a doctor versus working in music. Faith thinks he should do what makes him happiest. Nate agrees.

Adam video chats with Chelsea. Anita’s doing well and so is Connor who loves visiting with her. Adam’s glad to hear. Chelsea’s thankful to Adam for allowing this. Adam thinks it’s time to talk about bringing him home. He has lacrosse camp coming up. Chelsea argues that there’s a lot going on at the zoo and the museum. Adam says she can have as much time with their son when they return. He thinks Connor can return with Rey in a day or two. Chelsea asks if he can stay longer. Adam knows how important this has been for her, but Connor knows she’s healthy. They can video chat and it won’t be long until they see each other again. “You’re right.” Later, Chloe turns up for her first day of work. She’s tense and looks around for bugs. Adam lets her. She says Chelsea had a great visit with Connor. “Good move,” Chloe says. She hears Connor’s returning home in a few days. She’s surprised. He’s trying to ensure everyone gets what they need. They agree to focus on work. He set her new office up and will give her free reign to hire her new team and go crazy. He trusts her fashion instincts, “Because I have none of my own.” She asks if Chelsea will still be allowed to work there. He says yes. She just wonders if he’s going to go back on his word. She gets herself worked up and thinks this job was a hoax. She thinks she’s seen right through him. She goes on and on and finally, Adam shows her the door and angrily tells her to leave. She’s not going anywhere. The contract is legit. He gives her an envelope. She thinks it’s a restraining order but it’s a key to her office. She’s confused and calms down. He knows she’s pressing his buttons, trying to get a reaction out of her. He thinks they needed to get that out of the way if they’re going to work together. He knows she’ll never trust him fully, but one day, she may see him in a new light and if that’s true, anyone can. She has to get to work and says, “In the meantime, don’t hold your breath.” He grins as she leaves.

Sharon sits at the park and calls Rey. She needed to hear his voice and hopes he’s coming home soon. She sends her love. Adam appears. She jumps out of her skull. “Are you following me now?” She apologizes. She’s been jumpy lately. He reminds her it’s a public park in daylight. She admits she was thinking about their conversation last time. He turned around and made it about them. He wasn’t aware. She didn’t know why he mentioned good or bad Adam. She doesn’t feel pulled toward either side of him. She feels pulled toward Rey. “Don’t try to rope me into talking about our history. It’s in the past.” She goes.

Back at home, Tara and Kyle discuss Ashland. She wants to see him alone. Without Billy. He goes and Ash shows up. She wants to be a team when they talk to their son about his diagnosis. He’s surprised since that’s not what she wanted when she asked for sole custody.

Victoria meets Nate at Society. She wants to pick his brain on a friend. Billy walks in and eavesdrops as she tells him her friend has small cell lung carcinoma and he’s resistant to treatment. She hopes he can help her. Nate knows who she means but she asks him not to say it aloud. He admits Billy had the same questions before the article came out from ChanceComm. Victoria doesn’t want to get into why he’s curious. She knows a little about treatments and he tells her he’ll talk to colleagues and find out what’s out there. She’s thankful. She needs to find something that might help him make a decision.

Adam goes back to work. Chloe arrives at his office. She emailed him about some designs. He thinks she’s fast and will get back to her on it. Once she’s gone, he closes his laptop and is deep in thought.

Sharon returns to the coffee shop and Faith notices how distant she is. Sharon brushes her off and goes into the back room, where she too is deep in thought.

Kyle visits Phyllis at the hotel and says, “Tell me what the hell you’re doing to Tara!”