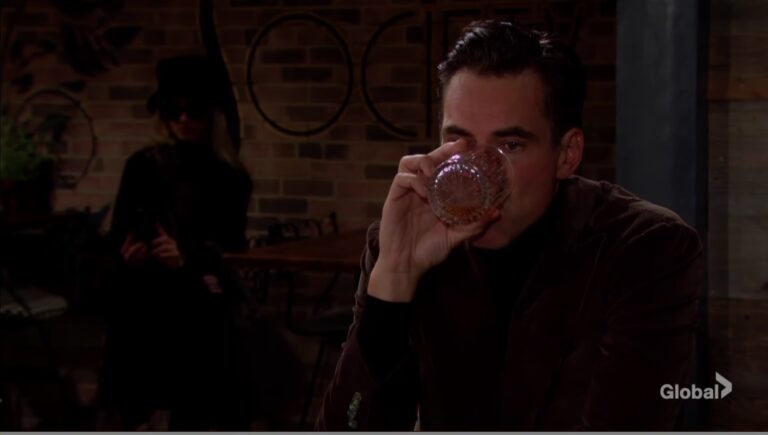 Canadian Y&R day ahead recap for Wednesday, December 8, 2021 episode, which airs in the USA Thursday, December 9. (Recaps live by 5:45 PM EST daily.) In the previous episode, Chance exhibited issues getting into civilian life. In this episode of CBS’ The Young and the Restless, Billy seems to have a stalker, Adam takes Billy’s bait, and Ashland learns his cancer is no longer spreading.

Lily stops by Newman Enterprises and interrupts Ashland and Victoria to talk to her. Ashland leaves and Victoria says she respects Lily, and not just as a business woman. Lily thanks her. She appreciates that Victoria will consider buying ChancComm. It’d make her blood boil if Adam got a hold of it. Lily brings up Billy falling into his old addictive, self-destructive behaviors. Victoria understands. She says Billy did bring a lot of this on himself. She brings up Billy using Ashland’s past against him.

Lily reminds her that it’s true. She often feels Victoria wants to help Billy when it benefits her. Victoria asks if she came for advice or to rake her over the coals. She offers to tell her what to look for if Billy relapses. She says he often will go missing and his excuses won’t add up. There will be inconsistencies to his story. She’ll know he’s outright lying. He’ll start drinking at odd hours and times that he’ son a manic high. Everyone is wrong but him. Lily seems daunted. “This seems pretty ugly,” she admits.

Victoria asks her to let her know if she sees these signs. Lily thanks her for her candor and asks for confidentiality. She goes and Ashland returns. Victoria tells her what they spoke about warning signs that Billy has relapsed. Victoria’s glad she shipped the kids off to school and hasn’t told Billy yet.

Adam finds Billy drinking at Society’s bar. Billy shakes his head. “This is perfect. You’re exactly who I want to see.” Adam comments on how early it is for drinking. Billy thanks him for his insight. Adam’s not surprised to see him there. Nobody could blame him for losing it a bit after such a swift fall.

Billy doesn’t want Adam to get his paws on ChancComm. Adam shrugs. “You have no leverage.” Billy tells Adam to go but Adam keeps taunting. Again, Billy asks him to leave. Adam says he ruined his last chance to be a leader. Billy doesn’t care. Anything is better than being Adam. Adam leaves and Billy orders another drink.

At Crimson Lights, Tessa and Sharon talk about Sharon’s excitement over the holidays. Sharon asks for ideas for Mariah. Tessa hasn’t any. Sharon hopes Noah’s time in Genoa City is permanent. He walks in and they smile at him. Sharon goes and Noah tells Tessa he wants to take photos of her, honest and raw ones, for her album cover.

Sharon reappears and thinks Tessa’s come a long way. They head to the patio and Sharon closes the room down so Noah can take photos. Noah likes working this way where nobody’s micromanaging. He shares that Adam asked him to do more freelance for Newman Media. Both women think it’s a good idea but Noah’s not sure. It’s Adam, after all. Sharon defends Adam. She thinks he deserves credit for the changes he made. She of all people knows how toxic he has been but is certain he has changed.

She asks Noah to promise he will give Adam a chance. Noah doesn’t seem on board. Later, he takes photos of Tessa with her guitar. He talks about her passion for her music. He saw that passion at Devon’s studio.

Mariah arrives at Grand Phoenix. Victor says they missed her last night. She apologizes that work got in the way. They talk about how happy they are that Chance is back. Mariah thinks Bowie is lucky to have both of his parents. Victor is confused. “Bowie?” Mariah admits it’s a nickname she gave him. He likes it.

He knows Abby and Chance are grateful to all she has done. He’s sure Chance will want to see her. She asks after him and Victor turns the talk back to her. He’ll see to it that she gets justice because of Stitch. She thanks him but she’s fine and is trying to move on. He tells her she and Chance will be loved by the family. He leaves for a meeting.

Adam takes a few calls at work. Victor turns up. Adam thought his father was avoiding him. Victor’s been dealing with Abby and Chance’s return. Adam wants to put together a proposal for ChancComm that will knock Jill’s socks off. Victor has decided to let Victoria bid for it without their interference. Adam’s angry. “What changed your mind?” Victor thinks it belongs with Newman Enterprises in the first place. Adam feels he’s an underdog. Vic says people always root for the underdog. Adam assumes it’s one of his dad’s tests. Does he have another motive? A media war between his children? Victor grins and goes.

Mariah eavesdrops at Crimson Lights and smiles as Noah tells Tessa that Mariah noticed her passion then too. He talks about her connection to Tessa. Tessa says they’ve been through so much together. Noah takes photos as he asks her to tell him about that. She feels lucky to have her support. She believed in her.

“Everyone needs a Mariah in their life,” Noah says. Tessa talks about her encouragement. She talks about the music video where she performed in public. She doesn’t think she knew what it was like to love or be loved unconditionally. “It’s exhilarating but it’s hard, too. Especially when you see hour person hurting and there’s nothing you can to do take the pain a way.” Mariah looks sad and a tear falls down her cheek. Noah takes photos of Tessa as she talks. Afterwards, Tessa thanks him. She calls this photo shoot ‘something special’. She turns around and Noah mutters, “Yeah. It was.”

Elsewhere, Sharon talks to Mariah about her feelings of attachment for the baby. Mariah says it was overwhelming at first. She’s dealt with her feelings. Sharon’s proud of her progress but hopes she doesn’t feel she needs to suddenly be over it. She thinks Chance understands. Mariah admits Victor said the same thing. She doesn’t want to be a complication. Dominic will always be in the forefront of her mind.

At ChancComm, Billy tells Lily he did some ground work with Adam, to show that he’s losing it. He says Adam bought it hook, line and sinker. He thinks Adam is looking at how to best exploit him. “Good. That’s what you want.” Billy’s plan is to let Adam and Victor think that he’s blowing up his life. Lily admits she went to Victoria to ask for warning signs that Billy’s backsliding. Billy is concerned. Does she think he’s going to fall apart? Lily was being clever.

She thinks it was a good idea to go to Victoria, though she admits it did give her doubts. Billy seems concerned. Lily believes in him. She thinks Victoria and Ashland area partially to blame for all of this and Ashland got off. Lily apologizes for not going to him first but this is part of his plan. Billy thinks it’s perfect because it’ll get back to Adam and Victor. They kiss and Billy professes his love for her.

Back at Newman, Ashland tells Victor that there’s no further spread of the cancer. Things are looking up. Victor’s glad to know. He shares his own news. He’s not going after ChancComm. He wants Newman-Locke to have it. Victoria grins. It’s good news. She asks if Adam’s on board but Vic says he has no choice. He doesn’t have finances to make a bid on his own. “So I don’t give a damn what he thinks.”

In their suite, Mariah thinks Tessa is beaming after the photo shoot. She says he has a great eye. She saw her with Sharon having an intense conversation. She asks if she’d like to share. Mariah fills her in about feeling in limbo. Tessa says she could have come to her but Mariah thinks her focus should be on Tessa. They kiss and profess that they love each other.

In his office, Adam hops on a call trying to get someone to invest with him so he can make a deal. He asks them to get back to him and makes another call.

Billy sits alone drinking at Society. A blonde woman in a black outfit takes a video of Billy.

Monday’s day ahead recap episode of Y&R! Chance confesses he failed Abby, While Nick and Victor Clear the Air