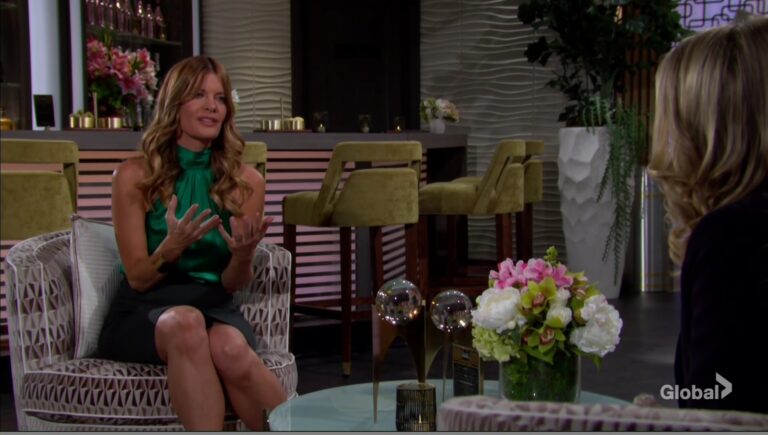 The Canadian Y&R day ahead recap from the Tuesday, July 20, 2021 episode, which airs in the USA Wednesday, July 21. In the previous episode, Adam learned that Victor set Sutton up. In this episode, Tara is lied to, threatened, and Victoria defends Ashland to her.

At the ranch, Nikki calls for Victor. Their bags are packed and he’s nowhere to be found.

Victoria finds Victor sitting on her sofa at home. They talk about his trip. He’d have invited her but she’s busy. She thanks him for the flowers. He’s full of admiration, he admits. He asks whose idea the merger was. Victoria doesn’t like what he’s getting at. He learns Ashland moved in and says he doesn’t want her to get hurt. She tells him he’s on the same page as Billy. She knows what she’s getting herself into. Victor thinks it happened awfully fast. She tells him to go on his trip and she’ll manage professionally and personally. He wishes her good luck. “Don’t you get hurt. I’ll see you when I come back. I love you.” She tells him she loves him and he goes.

Ashland arrives at the Abbott house. Kyle rolls his eyes and lets him in and Ashland calls for Tara. She’s taken the kid out so Ash asks if he’s behind her trying to take his kid from him in his dying days. Kyle denies that’s happening but Ash says she filed for sole custody. Kyle admits she’s worried about Harrison who has had bad dreams ever since the incident in the park. Ash is upset but doesn’t think it warrants full custody. Ash thinks this means Tara’s angling for him to beg each time he wants to see his kid. Kyle asks him to be reasonable. He needs to be the one to spend every moment he has with Harrison and break the news to him. He asks Kyle to tell him how that’s unreasonable. Later, Sally arrives. Kyle says, “I hate the way you dive-bombed back into my father’s life.” He’ll tell him how opportunistic she is. Sally thinks he knows. Kyle thinks she has something to do with Summer’s big job offer. He asks about what her trip to L.A. was about that happened right before Summer got the job. Sally lies about the reason behind her trip.

Lily returns home. Katie’s on the bus on her way to camp. Billy says Johnny’s still sick. He’s sorry to have kept her up. She’s fine with that. He has toast and fluids and a joke book. He reads a joke to her: “Why did the cookie get sick? Because it felt crummy.” Billy thinks that his kid is sensitive and that he’s sick because Ashland moved into his house. Lily says all they can do is make their place a safe haven for the kids. Victoria drops by. She wanted to check on Johnny. He lets her in and Lily goes to a meeting. Billy repeats that the changes in his life might be making the kid sick. Victoria agrees to a certain extent. She’ll work hard to make him feel loved. Billy says he was wrong to question her decision. She thanks him and needs to get her dad on board now. Billy asks what would happen if Ashland wasn’t dying. Victoria goes to take care of the kid and returns and says there is a lot of depth to their relationship. Billy’s sad they don’t have much time together. She can tell she’s serious about him. She doesn’t know what would happen if he wasn’t dying. Billy tells her, “If you’re happy. I’m happy.” That means a lot to her.

Related: No Days on the next two weeks

Summer and Phyllis video chat. She asks how everyone is doing. Phyllis explains, “Tara’s still ensconced at the Abbott house with her kid. She’s like one of those scavenger fishes that hooks on to a whale or a shark.” Phyllis knows it won’t last forever. They’ll see her true colors very soon. Tara walks up and Phyllis greets her. She invites her to say hello to Summer. “That’s alright. I’ll leave you to it.” She goes and Summer is surprised she’s being sweet. “You’re up to something.” Phyllis lies that she isn’t. She pretends that she can’t see or hear her anymore. She says goodbye and then calls for Crystal to fix this. She goes to Tara and apologizes for accusing her of trying to get sole custody of a dying man. She’s sorry for all involved. Tara gets it. Phyllis sympathizes and confesses, “I only pretended to befriend you.” She’s protective of Kyle and Jack and didn’t want them to be manipulated. “That’s not what I’m doing,” Tara lies. Phyllis says she was projecting her past history on to Tara. “I did some pretty bad things in my past, things I’m not proud of.” She used to lie about the reasons but says she was just selfish. Phyllis gives her a tip. “Avoid Sally Spectra like the plague.” She thinks Sally had something to do with Summer’s departure. She’s been competitive and antagonistic toward her. Sally appears and Phyllis says to do what she will with the advice. She goes to get her coffee and Sally questions Tara. Tara says it’s nothing to worry about. Sally tells her she needs to worry about Kyle. “Tell him to back off, because we’re in this together. If one of us goes down, the other follows.” She goes and Phyllis watches from nearby.

Lily runs into Moses in the park. He wants to talk about Faith. He likes her and says she wants to go slow but he doesn’t want to go so slow that he’s stuck in the friend zone. He wants to respect her boundaries too. Lily thinks he’s doing the right thing. A man doing all he can to get to know a woman is something that women like.

Victor arrives home and is upset. When was she going to tell him Ashland was moving into Victoria’s. Nikki wasn’t sure it’d happen at all. Victor grumps about it but Nikki has come around to her daughter’s way of thinking. They disagree. Victor calls it confusing for them and the kids and her will be heartbroken when he dies. Nikki knows but she’s being selfless. “Oh come on,” Victor snipes. Nikki asks him to relax and be proud of the strength they instilled on her. “Alright. You convinced me. Okay, my baby?” He’s ready to go see Summer and Noah.

Tara arrives home and Kyle whines to her about Ashland’s visit. They agree they need to tell him Ash is sick but they need to do it the right way. Kyle says Ash wants to tell the kid. “I can see his side of this.” Tara thinks it’s something to consider. She invites him to lunch.

Victoria and Ashland meet at Society. He wants to tell Harrison the truth and isn’t sure he’ll be able to since Tara is avoiding him. Victoria doubts a judge will take a dying man’s son from him. Ash says his lawyers might think it’s too much for Harrison to bear. Again, Victoria asks him to accept the treatment. He yells that the situation is becoming unbearable, just as Tara and Kyle appear. Victoria tries to get him to ignore them but he goes to Tara and accuses her of hiding from him. He calls her custody to maneuver the worst. She counters that Harrison was very upset. Victoria defends Ashland and Kyle reminds Victoria that he’ll be there with his son. Ashland starts to yell about how Kyle doesn’t know anything about his son. Victoria asks him to relax when he seems to have trouble breathing. She takes him away as Kyle vows to protect Tara. She reminds him of how fun it was to be together in New York. He remembers them not caring about what anyone thought. He wonders where they’d be if they took the plunge. She thinks they’d be in Paris. She would have grown her business and he’d manage it. Phyllis pops up and sees them laughing. “Don’t let me interrupt,” she says, and Tara looks concerned.

Lily arrives home to the condo with chicken soup for Johnny. She fills him in on what she’s been up to and he admits he and Victoria cleared up things between them. He thinks she met her match in Locke. Billy feels fortunate to have his soul mate sitting with him. Lily smiles.

Ash and Victoria arrive at her place and discuss what happened. “A lesser man wouldn’t be able to get up out of bed in the morning,” she tells him. He’s so happy they found each other.