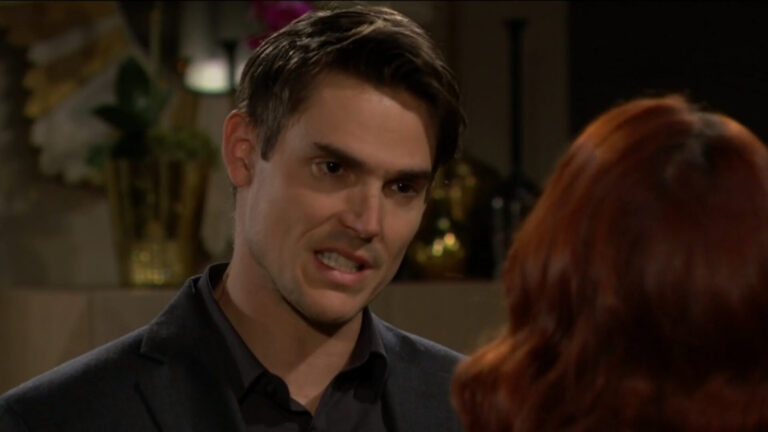 In this episode of CBS’ The Young and the Restless, Chloe is surprised by Nick getting behind Sally, Traci gives Kyle some advice, and Kyle and Summer decide to lay down the law with their mothers. In the previous episode, Nate revealed his plan to take over Chancellor-Winters, and Adam caught Nick and Sally in her suite.

Adam knocks on the door of Sally’s suite. He’s startled when she opens and Nick is there. He asks what he’s interrupting. Nick tells him it’s none of his business.

Adam tells his brother he will talk to him when he’s ready. Turning to Sally, he prompts Sally. She asks what he’s doing there. Last night, she made it clear she didn’t want to see him, but he’s been racing after her.

He wonders why she is with Nick in her room and won’t explain why he wanted to speak to her until his brother is gone.

Once he has, Adam flatly asks her if she’s sleeping with his brother. “How dare you!” she objects, suggesting this is a baseless accusation.

Adam points out she’s avoiding the question. She doesn’t think it matters.

They’re all adults and free to do what they like. None of this matters.

“It matters to me,” he tells her. She claims she has no idea what is actually important to him.

When it comes to him, she has no idea what the truth is and what is just a scheme.

She believed he was worthwhile and put everything in her life on the line for him.

Now she’s fighting to prove she’s more than one of his exes.

She can’t keep doing this and needs to focus on what’s best for her.

Sally needs his space and she needs him out of her life.

She can’t get past him treating her like a pawn.

“I’m done. I am moving on with my life. You should too,” she declares.

Nick bumps into Chloe at Crimson Lights. She worries about Adam searching for Sally. She doesn’t want him getting into her head.

Nick is sure Sally can handle this. She’s learned a valuable lesson and he’s impressed with how she handles things.

She’ll be fine no matter where she ends up.

Chloe didn’t realize that he and Sally had gotten to know each other so well. It sounds like they are besties.

As he stirs his coffee, he says they just work closely together.

He’s convinced his sister to keep her on and is sure she will do fine.

As Nick sits, Adam wanders in.

Nick flashes back to sex with Sally and how they never thought it would happen in a quadrillion years.

He starts sniping at Adam.

His brother wonders if he’s happy she’s available for private meetings and asks if he’s told their dad about him sleeping with Sally.

Nick pulls a face. Adam asks him how Sharon and Summer will feel about this. “I wouldn’t want to make you angry. We know what could happen,” Adam snarks.

Nick trashes him for the way he treats women. His brother thought they had gained a new understanding but now that’s vanished.

When Sally returns to her office, Chloe tells her she ran into Nick and he seems to be her number one fan now.

At the Abbott estate, Kyle tells Traci about the big event he is planning for his wife.

He explains what the planner he hired has in mind.

She understands he wants to give his wife a surprise but keeping Summer in the dark about this is a huge mistake.

Kyle is confused. Traci tells him it’s the kind of thing Summer would want to plan and anticipate.

Would she be able to celebrate with her friends the night before?

He admits they do everything together so she doesn’t see why this should be different.

Summer strolls in and demands they spill the beans.

Kyle tells his wife how much he loves her and she’s the center of his universe. They’ve always known each other and she’s been a million things to him. They’ve lived a lifetime together and he’s always followed a path back to her.

He loves the way she opens up her heart and she never gave up.

“I would choose you every day,” he says. She’s what makes him want to find out what’s next.

She tells him the next chapter is out of this world.

Dropping to his knees, he asks her back down the aisle and proposes again.

Laughing, she tells him she’s married to a handsome man already and tells him to get up.

Leaping up, he tells her their wedding in Milan was magical, but he wants to go big for their family.

She wants everyone there for their happy day.

He admits he was going to surprise her with this, but Traci talked him out of it.

She wouldn’t want it any other way. When he tells her that Nikki is already getting her a dress from the Forresters, she tells him she would love to marry him all over again.

They have to get back to the office and she promises her re-proposal glow isn’t going anywhere.

At Jabot, Phyllis asks Diane if she heard Mariah saying she was doing a great job.

Diane says she’s been assigned to write the press release for Marchetti Home.

Phyllis is surprised they are giving that to someone with such a lack of experience.

Diane thought her attacks would be cleverer than this and confronts her about the document planted on her computer.

“You haven’t given me enough credit,” Phyllis warns, saying if she wanted to take her down, she would never see it coming.

Diane tells her how heard and supported by her son she feels thanks to this.

Once she walks off, Jack comes out and asks what that was all about.

Phyllis says Diane accused her of trying to set her up. She insists she didn’t. That’s a relief to him.

As Phyllis sits in the hallway, Kyle and Summer step off the elevator.

After he goes off to see his father, she tells her mom she knows everything. Her mom is relieved she’s talking about the vow renewal.

Summer is glad that everyone is coming together for this. Her mom admits keeping it a secret was killing her.

She’s very happy for her and they have a lot of planning to do. They giggle and hug.

In Jack’s office, Kyle tells his father that Summer knows about the vow renewal.

Jack’s glad someone told him a surprise renewal was a bad idea. He wonders why his son looks like his world is falling apart.

Kyle tells him about the document his mother found on her computer. Jack asks how he will handle this. His son isn’t sure. If it’s true, Phyllis has to go. If it isn’t, they are still stuck in a cycle.

Putting them together may have been counter-productive. He has enough to do without being a referee. Jack suggests that both women should go. Kyle thinks the vow renewal could remind them of what’s important.

His father tells him to bring them together and draw a line in the sand. There should be a zero-tolerance policy regarding shenanigans.

Kyle and his wife go to Society. He tells her that Jack thinks they need to force their moms to play nice.

She tells her husband about her mom insisting that she take a leading role in the ceremony planning.

He doesn’t want this to be a battle, so they need to take a hard line. She agrees they should put their mothers on notice.

Back at Jabot, Phyllis is on the phone with Nikki, asking her how things are going in LA. Her daughter sends her a text, requesting a meet.

When Phyllis arrives at Society, she’s miffed to find Diane entering. They realize their kids have planned this. Red warns her she should be worried.