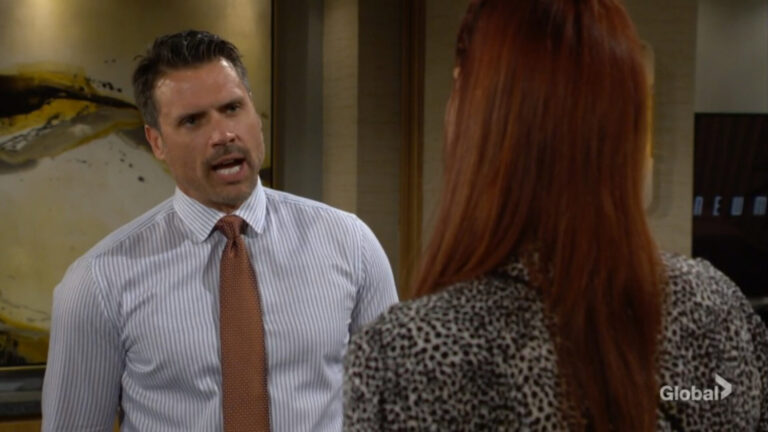 In this episode of CBS’ The Young and the Restless, Nate and Devon bicker about business, Nick worries to Sharon about what Victor is up to, and Phyllis tells Summer she might sell the hotel.

In the previous episode, Chance dug for clues incriminating Nick and Victor gave Adam a warning.

At Society, Amanda and Devon wait for Nate. She thinks it’s good they are doing this in public so they don’t cause a scene.

Nate arrives, arguing with a reporter on the phone. He tells them that they want a statement from him about Locke’s death. He worries he’s going to exposed as his unwitting accomplice in his cancer scam.

It’s a good thing he’s not in medicine anymore because no one would take him seriously.

Amanda assures him he’ll be out of the limelight. Devon says he can take personal time if he needs it.

They get back to talking business and Elena’s contract. She’s surprised he’s been in touch with her sister about that. They bicker about this and he makes excuses.

She thanks him for recommending the facility for her mom and will look at the papers her sister sent her.

Devon changes the topic to booking conflicts. Nate is feeling micro-managed. Amanda decides to leave them to sort this out.

The men get back to bickering and Nate accuses him of pestering. The former doctor gets defensive and Devon doesn’t think he should be taking this so personally.

He suggests Nate is overreacting because he’s second-guessing his own career change. They keep bickering.

Devon knows he has a big learning curve. Nate thinks he just wants to call the shots himself.

Devon is not going to argue with him but suggests he get some media training. This doesn’t rub Nate well and he walks out.

Devon heads into the office. Amanda guesses things didn’t go well. He complains that Nate is too sensitive. Maybe pulling him into the business world so quickly was a mistake?

She reminds him that it was supposed to take time to ease him into the job. Devon doesn’t have time to be his guide. Amanda is sure it’s just a learning curve.

He doesn’t know what to do. The whole point of this company was to be a cohesive family situation and he’s not confident it will ever be that.

Phyllis and Summer arrive on the rooftop of the GCAC. They chat about breaking the news to Harrison about Ashland and how the little boy needs protection.

Phyllis thinks the media is going to start snooping and all hell will break loose.

They get a table and Summer explains the Abbotts have been keeping the reporters away. No one is claiming Locke’s body and they may have to arrange a funeral for Harrison’s sake.

Phyllis says it will be like Diane’s funeral where not a tear was shed. She tells her daughter how proud she is of her mothering skills. Summer is trying her best but Harrison keeps asking heartbreaking questions.

Phyllis turns the topic to Diane again and complains about the ice in her drink. Her daughter pushes her about Jack’s feelings.

This leads to more venting about Phyllis.

The redhead does not want to get into her issues with Jack right now. She suggests they talk about her working at Marchetti.

Summer stares into space and then says Kyle wouldn’t be receptive at the moment.

Her mom informs her she may be selling the Grand Phoenix. This is a surprise so Phyllis explains the more than generous offer she got from Lily. Maybe it’s just meant to be?

Summer thinks that working with Diane could be a problem. Plus, Kyle might be suspicious of her sudden career change. Her mom claims she’s just a restless spirit and wants to work with her family like everyone else in Genoa City.

Phyllis gets a text asking her to meet to discuss taking down Diane.

She tells her daughter how incredible it could be for them to work together.

“Blechhh!” Chloe growls as she enters Sally’s office. She starts venting about media parasites digging for information on Locke’s death.

Sally points out they are part of the media. She says they aren’t evil, they are just trafficking in hot commodities.

Chloe tells her they likely don’t know about Nick punching Ashland before he died. That’s news to Spectra so her friend explains. She says no one could blame Nick for giving him a sock in the jaw.

Sitting down, they talk about servers. Sally says they might need extra ones if they break a big story. No one is reporting what happened at Victoria’s yet.

Chloe reminds her they have to be very, very careful.

“I am nothing if not careful,” says Sally. Chloe reiterates her warning and exits.

Sharon meets with Nick in the park. He tells her about how hard Locke’s death is hitting him. He feels like this is all his fault. It’s driving him crazy thinking that his father could be lying to his face about it.

Sharon knows that Victor could be pulling all kinds of strings. They recall what happened when he covered up Adam accidentally killing that guy in Kansas.

Nick claims he’s not a scared little boy and the truth always comes out.

She suggests the official version of the story could be true. He points out even the police are doubting that. If the cops know more, they aren’t sharing.

He gets a text from Sally, asking to talk about the night in question. She tells him she will be around if he needs to talk. He thanks her for being there for him.

Nick shows up at Sally’s office and asks where she got her information. Does Newman Media want to know or does she? She says they are the same thing and requests some details.

He insists that he was only standing up for his sister. He has no idea how the crash happened. She suggests they publish these facts and can out-scoop everyone.

Nick chews that over. He worries about what this story could do to his sister. She says that if they don’t get out ahead of it, it will look like they are covering it up.

He says the story is in her hands. “What are you going to do with it?” he asks.

Nate drops by Crimson Lights to pick up coffee. Sharon chats with him about Elena and he starts venting about work.

As he doctors his coffee, Imani calls and they chat. He gets a table, leaving Elena’s coffee behind.