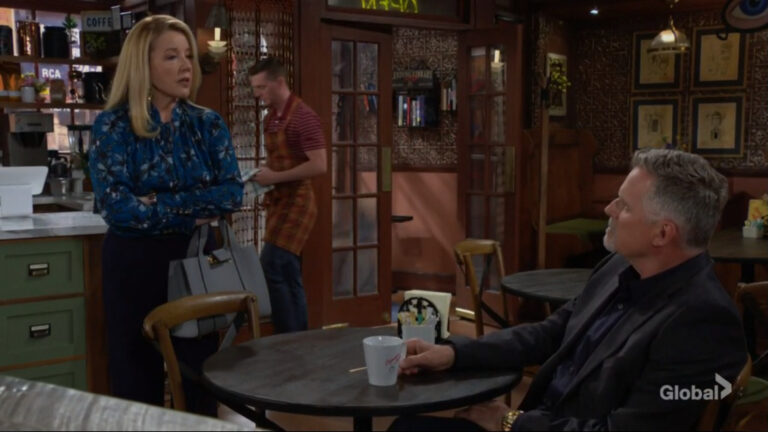 In this episode of CBS’ The Young and the Restless, Crystal returns to Genoa City for the wedding, Sally lets Victoria know that she too faked an illness, and Faith breaks down over Rey’s death. In the previous episode, Noah helped Tessa and Mariah with their wedding plans again, and Sharon returned from Miami. She shared how Rey’s memorial with his family went.

At Society, Sally tells Victoria she’s satisfied being COO of Newman Media and Adam’s happy with where he is. “The only loser her is Ashland, and he deserves it.” Victoria says he came out of it fine. Richer.

Sally says he gave half away. She thinks it’s obvious that Ashland misses Vicky. Victoria shrugs and says they’re misreading. Sally thinks it takes one to know one and she’s been where Ashland is now.

Sally tells her the story of how she duped Wyatt the same way. Victoria’s disgusted and calls her and Adam two of a kind. Sally takes it as a compliment. She reveals things ended in disaster for her. Just like it did with Victoria and Ashland.

This is how she knows that Ashland’s pain is real. She believes the man feels true remorse.

Victoria rolls her eyes. Sally says that Locke has hit rock bottom, which is why he donated the money. She admits she feels sorry for Ashland. Victoria says her sympathy is misplaced and she’s projecting.

Ashland was just using her to get full control of Newman-Locke. Sally reminds her he’s lost all hope of gaining any of that and he’s still hanging around. Vic says he enjoys manipulating people and hates to lose.

She doesn’t care what his intentions are. Sally understands. Too much has happened. She reminds Victoria of his declaration of love at their wedding but pretends to agree it’s too late for them. She thinks he’ll be haunted for how he treated her for the rest of his life.

Victor meets Michael at The Grand Phoenix. Michael brings up Diane being back in town. Victor hopes she leaves soon. Michael turns talk to his wife who wants him to quit. It’s not going to happen.

Victor doesn’t get why he’s bothering to tell him and says they need to talk about Locke. They need to get rid of “that SOB permanently.” Michael leans in and Victor assures him it won’t mean he’s in danger.

Victor shares that he’s been hovering around Victoria and she’s been cold to him so he stepped up his game and donated 250 million to New Hope in Rey’s honor.

He’s trying hard to convince Victoria that his love for her has transformed him. Michael snorts. Victor says it’s not working. She knows she can’t trust the man. Still, they need to come up with a plan to get him out of town.

At the ranch, Faith brings the dry cleaning home and talks to Sharon about what they can do for giving something old, new, borrowed and blue for Tessa and Mariah’s wedding. Sharon tries to take the dry cleaning, but Faith admits there’s a shirt of Rey’s inside.

She breaks down in tears because the dry cleaner asked after Rey and didn’t know that he’s dead. She says none of this seems real. Both of them expect him to walk through the door.

They hug and Sharon tells her that someone donated a large sum of money to New Hope in Rey’s name. Faith’s astounded. “It’s so awesome.” Sharon thinks it’s a way to show Rey’s kindness is never forgotten.

Faith asks who the donor is and Sharon lies that the donor wants to remain anonymous. Sharon shows Faith a cute box filled with champagne and other items for the wedding. Faith loves it, especially that it’s homemade. It works with their relationship. They accept each other in spite of their flaws.

At their apartment, Tessa says the bakery called to confirm where to bring the cake. Mariah’s superstitious and paranoid so Tessa calls her Twitchy. Crystal arrives, causing Tessa to cry out happily.

They embrace and Mariah hugs Crystal who she says looks good. Strong. Tessa and Crystal hug once more and Tessa says this is all thanks to Rey. Crystal goes to get settled and showered.

Mariah thinks it’s perfect since she won’t be alone while she’s at her mother’s. They kiss and hug. The next time they see each other will be at their wedding. Mariah goes and Crystal likes the painting Noah created for them.

She assumes he’s gotten over how it started. Tessa admits it was awkward but they’ve moved on and things with Sharon are good. Crystal is thrilled to be free of the charges, thanks to Rey Rosales, a person she never met.

She admits things were great in Canada but she always had to hide. Now she can go anywhere.

Tessa thinks Crystal would have loved Rey. Tessa admits that she and Mariah will adopt. She fills her sister in on Mariah coming from living in a cult. They don’t want to saddle their kids with the same issues they went through.

Tessa talks about coming close to losing things with Mariah but that they found their way back to each other and made things right.

Crystal thinks it’s about trust or what she imagines it to be. She hasn’t experienced it. Tessa thinks it can happen for her. They talk about doing their nails and a trial run on Tessa’s hair. Tessa likes the Boho chic look.

Victoria finds Locke at Crimson Lights. She asks if he’s there waiting for her daughter to wander in. Does seeing her feed his voracious ego? Ashland says every move he’s making is to ease her pain. Nikki snipes that they’ve learned not to believe a word he says.

If he loves her, he should prove it by leaving her alone. Nikki calls him toxic. He’s an arrogant narcissist incapable of putting others’ needs above his own. As they argue, Victoria turns up and interrupts.

Nikki tells her what’s going on but Victoria doesn’t care where Ashland goes. Nikki says if he’s not smart enough to stay away, they’ll come up with their own ways of solving this little problem. “Do you understand me?”

Mariah strolls into the ranch for a sleepover. Tessa will get to spend time with Crystal. Sharon’s glad she’s here. Mariah says what Rey did is an incredible gift. They pop popcorn and Mariah is thrilled to marry the love of her life.

Faith can’t wait to dance. Sharon can’t wait for all of it since she’s missed so much in Mariah’s life. Later, Sharon twists her wedding ring and thinks of Rey. Mariah comes down for some chamomile tea since she can’t sleep.

She talks about how happy she is and worries she’s hurting Sharon’s feelings. Sharon tells her that parents live for this. This is everything she wants for her girl so tells her not to feel guilty. They hug.

At Newman, Nikki asks Victoria to go away with her on a spa trip. Victoria’s grateful for what she’s trying to do but thinks the timing is off. Plus, she knows she wants her away from Ashland.

Victoria lets her mama know she’s not on the verge of a nervous breakdown.

Back at Society, Sally watches Locke drink and approaches him. She says the two of him make quite the pair and fills him in on Victoria being in the same position earlier.

She can see that they’re missing each other. Ashland asks why she cares. She claims she’s a sucker for romance.

Mariah and Tessa’s wedding is this week.
Allie meets Summer.