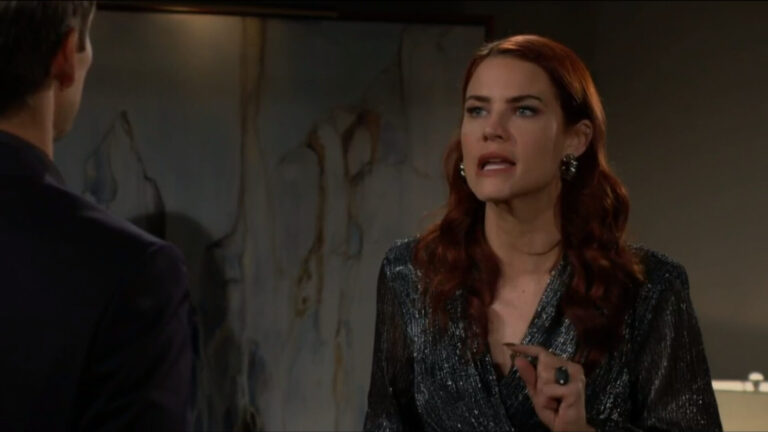 In this episode of CBS’ The Young and the Restless, Nate tells Elena he has an idea to prove himself, Jack encourages Diane to prove herself, and Victor tries to get Nikki to relax. In the previous episode, Adam nearly caught Sally and Nick having sex, while Billy stopped Devon and Nate from fighting.

Nick arrives at Society and orders a beer at the bar. Nate complains to him about his day. The Newman says it’s been one of those years.

After they toast to surviving another day, Nick says that the chaos has continued since Locke died. Nate’s been facing long-term consequences too. He felt suckered, not because he was weak but ambitious.

“There’s nothing wrong with that,” he adds.

He’s put all his animosity behind him. Nick says Victoria has too.

Nate is still trying to figure out what he’s supposed to be doing with his life. He’s questioning a lot of things.

Nick is sure he will find a niche but the former doctor isn’t so sure.

“Who knows? Maybe you’ll end up at Newman,” Nick suggests. Nate thinks things are about to turn around.

On his way out, Nick bumps into Elena and tells her that her man is going through something.

Elena finds Nate moping at the bar. He informs her that he quit his job. She thought he was going to work things out but this was spontaneous and on bad terms.

He couldn’t handle Devon treating like a child anymore. She was hoping he could at least keep his familial relations intact.

She’s relieved he left given how unhappy he is. Nate thinks another door may already be opening. He already has an idea that will help him prove how capable and forward-thinking he is.

After he explains it, she says it’s a horrible idea. He accuses her of not supporting him and says he has no other viable options.

She thinks this would violate his integrity. She wants to believe that he knows it would be wrong.

Diane tries to creep out of the Abbott house when Jack catches her.

She fell asleep reading to Harrison and stayed longer than she intended.

He says she doesn’t need to be embarrassed. They discuss how much the kid likes the bunny story and all his dinosaurs. Jack points out that most of their names are made up.

He offers her a drink. She requests a cup of tea to calm her nerves. Once he hands her one, she says things were a little crazy at the office but he doesn’t need to know the details.

She starts venting about how challenging it is to work with Phyllis. He urges her to focus on her job. Diane isn’t intimated by Phyllis, she just doesn’t want her son to have to deal with the stress.

Maybe going to work at Marchetti was a mistake?

Jack urges her to stick to her plan and continue strengthening her bond with their son. Diane thinks he’s very wise.

She still wants to prove she’s up to the challenge of her job, and not just for Kyle, but for Jack too.

Diane is proud that they keep getting closer to being friends. He admires her determination to prove she’s changed.

She decides it’s time to go. He offers her a guest room but she insists on going.

At the ranch, Nikki looks for her travel charges. Victor doesn’t know what those are.

He puts on some music and tells her she can buy whatever gadget she needs in California. She should relax.

As they dance, he explains he relaxed on the heavy bag.

She still has packing to do but he tells her not to worry about meeting “this Deacon Sharpe character.”

He’s sure she will prove how tough she is.

Nikki admits she was confident at first but talking to her daughter brought up some negative memories.

She doesn’t like who she was back then and Deacon played a big role in that.

Her husband says they had lots of ups and downs. If he could go back in time, he would erase all the pain he’s caused her. If she’s this trepidatious, why is she going?

She reminds him he’s the only person with the information she needs about “damn Diane Jenkins.”

He’d love to take care of Deacon but she says she needs to do this on her own. Taking his hand, she assures him they are in a good place and no one can take that from them.

Once again, he offers to send his team to bring Deacon to Genoa City but she refuses to be talked out of her trip.

His security team will be there every step of the way.

She’s glad for the extra sense of security.

Sally heads to the bathroom of her suite. When she looks in the mirror, all she can see is herself having sex with Nick. Adam knocks on her door.

She opens and they both stand there with their mouths open. She tells him the GCAC was stuffy so she moved into the Phoenix. He welcomes her back and asks for a nightcap.

After she gets him a drink, he tells her there’s nothing urgent.

He just misses her and apologizes for moving too quickly at the pool.

“I haven’t stopped loving you and I don’t want to let you go,” he says. That’s not something she wants to hear.

He knows what he did was wrong, but he’s glad to see how successful she’s been.

Adam is committed to them getting back what they had. They can avoid the work-family conflict and he wants to earn her forgiveness. Someday he might be able to earn her love.

“Are you really ready to throw away what we had?” he asks.

She tells him his timing couldn’t be worse and gulps some water.

With some difficulty, Sally explains she missed an important meeting because she was on the rooftop with him.

Being with him is intoxicating and prevents her from behaving rationally.

They can’t behave like irresponsible teenagers. He admits his treatment of her has been unacceptable. She says she’s neglected her own well-being. He’s toxic and letting him get to her was a huge mistake.

He tells her that she’s right. He’s been selfish but there is something between them.

“Things have changed,” she says. When she sit, he gets on the floor and starts apologizing. She can’t invest in him right now. He’s a huge liability with no foreseeable return.

Running a media company is not like running her fashion house. She can’t focus on her personal life when she has so many people relying on her.

He asks if she and Nick were discussing her losing her focus.

She says their discussion was no concern of his and she doesn’t want to get into what happened. Sally thinks they need to avoid each other and asks him to call this goodbye for now.

Adam finishes his drink, sniffles, sighs, and tells her he knows she’s saying what she needs to to get through the pain, but he wants her to listen to her heart.

He knows how deeply she feels and how much he hurt her, but he meant all he said today.

He was stupid and wrong and never stopped loving her.

He doesn’t think her love for him went away either.

Nick goes to his sister’s office at Newman. She’s not around so he sits on the couch and sends Sally a text saying CEOs miss meetings sometimes but she should keep him in the loop in the future.

Back in Sally’s suite, she reads the message and then shows Adam the door.

Once he’s out, she sobs.