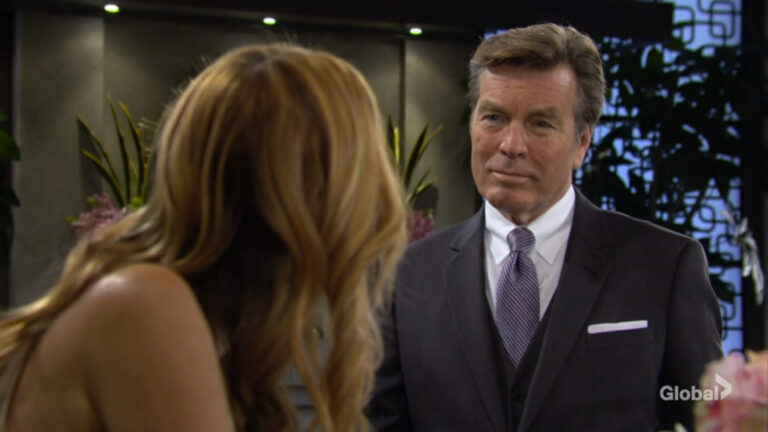 In this episode of CBS’ The Young and the Restless, Phyllis turns down Summer’s offer, Dominic has the procedure and Tess and Mariah brainstorm wedding options. In the previous episode, Michael had insider information on Ashland and Phyllis made a decision.

At the penthouse, Amanda finds Devon being pensive as he waits to leave for the hospital she asks again if he wants her to go with him. He assures her it’s okay. It’s a pretty low key operation. They couldn’t ask for a better outcome than his being a match for Dominic.

Besides, she’s got a big day too. She’s closing her law firm to go and work for Lily. She promises to support him no matter what happens. Amanda tells him how excited she is about her move to Chancellor. He says they will celebrate the latest step up in her career very soon.

At the Chancellor Estate, Abby tells Chance how much it breaks her heart to see Dominic looking tired and listless. They just have to pray that the bone marrow transplant is a success. She tells Chance it will be awkward explaining this to their families later. He doesn’t see any point in worrying them now. She worries about how he is doing. He insists he’s fine. She doesn’t want empty reassurances.

Learning about what happened on the stakeout with Rey meant a lot to her. He’s always been strong and she’s sure freezing was a shock to his system. Chance thinks today should be about Dominic but his wife doesn’t think they can delay this conversation. Getting him to sit down, she promises she will always be there for him. But she thinks he needs to talk to a specialist. He agrees to think about it and walks off for coffee. Abby looks worried.

Devon stops by the Chancellor’s estate to ask how Dominic is doing. Chance thanks him for all the medical equipment and the nurse he sent. It means a lot to them. He was able to give Dominic life and now he helped to save it. They chat about Chance’s condition.

Devon admits that he started having panic attacks after he refused to get help when Neil and Hilary died. It took a while but he turned things around. Chance needs to go after the help, not sit and wait for it to come to him.

At Crimson Lights, Sharon and Faith plan the trips to potential colleges. Nick and Noah join in and tease her about flying the nest. Sharon’s sure the hardest thing will be narrowing it down because she will have so many options. Noah says that never leaving Genoa City would have been a mistake. It taught him what he would be missing.

Sharon continues making her plans to visit schools with Faith until Moses arrives. The teens head to the patio.

They sit at a table where he tells her he’s thinking of staying local and going to GCU so he can still work with Devon. She claims that’s what she’s thinking too. He’s surprised to hear that. She tells him they are in the same boat and she wants to work with her family too. Moses worries her family will blame him if she turns down a big-name college to stick around. “Practically speaking, it would save us time if we were in the same place,” she says.

Noah asks Sharon if Faith and Moses are applying to the same schools. She says Faith has considered where he is going. Nick asks if she’s talked with her daughter about how big a factor her boyfriend should play in that.

Chance calls Sharon to say they are in the hospital for Dominic’s procedure. He was hoping she could refer him to a counselor. She offers to look into it and get back to him. Once he gets off the line, Abby thanks him for making the call. She knows it wasn’t easy. Amanda and Devon join them with coffee.

New! Y&R spoilers up to February 25

Who is Keemo Volien Abbott?

In their apartment, Mariah and Tessa are brainstorming. Mariah has to remind her they have to set some practical limits. April is right around the corner and they don’t want to push back the date. Tessa can’t wait to be her wife. Mariah might get tired of hearing that one day, but this is not that day.

They plan a spa day and nap as part of their wedding. They realize they could do better and Mariah encourages her to plan an ideal wedding for her. Tessa suggests they go back to San Francisco and have a destination wedding. It would bring them back to where it all began. They can get married on a cable car and have a reception by the sea.

Mariah likes that idea and then suggests they go to Dollywood. That’s exciting too so they start making calls. They check these venues but they are all booked up. Mariah suggests the Athletic Club rooftop or a Renfair. They continue brainstorming options like a Mexican beachfront, a haunted house, the Field Museum with a dinosaur, a mansion in Lake Geneva. Tessa is annoyed that they now have too many ideas. “We need help,” Mariah decides.

Mariah and Tessa go to Sharon, Faith, Nick, and Noah and tell them they have too many ideas. They list their various ideas, including a mini-music festival. Each of them supports a different option. That makes the couple laugh. This is no help.

They ask Noah to break the tie. It’s obvious to him what they should do. He suggests they combine all their ideas. It would just be a summary of everything they are. Tessa says they are wild and unpredictable and all-encompassing. Mariah thanks him for the great idea.

Devon, Amanda, Abby, and Chance all return to the Chancellor’s estate. The parents offer to keep Devon in the loop about anything that happens. Sighing and rubbing his head, Devon is reluctant to leave. The lawyer points out that no one wants to leave the child’s side tonight.

Abby suggests they stay there. That way Dominic will be surrounded by all his parents. They can’t say no to that plan.

At the Grand Phoenix, Phyllis tells Jack that she did a little digging into the texts he’s been getting. She found out the address where they have been coming from and has a picture of it. Jack is eager to see the house. Before she can show it to him, Summer calls her.

Jack says hello to Summer as she’s having a video chat with Phyllis. He tells the redhead he’ll check in on her later and then bumps into his sister.

Jack gets a text saying “Please don’t dismiss these messages. You’ll be glad you pursued this.” Traci quizzes him about it. Jack tells her to stop using her writer’s imagination when thinking about his life. As he teases her about being at the hotel for a tryst, she waves him away so she can get to her massage.

Phyllis and Summer chat. She hopes her mom will accept her job offer and come to Milan. “Baby, I’m turning it down,” Phyllis says. She’s thought about it long and hard but realized that Genoa City is her home. She has roots there, a hotel, and friends. Her daughter is disappointed.

Phyllis thanks her again. It was an amazing offer but not right for her. Summer asks why she didn’t mention Jack in her list and wonders how much he factored into her decision.

Phyllis insists that they are just friends. She believes in him and trusts him but she just went through a horrible breakup with Nick and isn’t ready to rush into another relationship. They care about each but that’s it. He always forgives her for screwing up and she always turns to him when anything good or bad happens. That sounds an awful lot like love to Summer.

“Listen, missy, Jack is not the reason I turned down your job offer,” Phyllis insists. Summer is still disappointed she won’t be moving to Italy but gets it. They will just have to visit each other more often.

Returning, Jack chats with Phyllis about how great Summer and Kyle have been doing. He asks if there was something she wanted to discuss from earlier. She asks if he knows someone named Hwang Nguyen. Startled, he explains that Nguyen is a very common name in Vietnamese. His late wife, Keemo’s mother, was Luan Nguyen. Hwang Nguyen is the name of her father, but it can’t be the same person.

Monday, February 22nd Y&R day ahead recap is up!